You are here: Home / Childhood and Kids / Signature 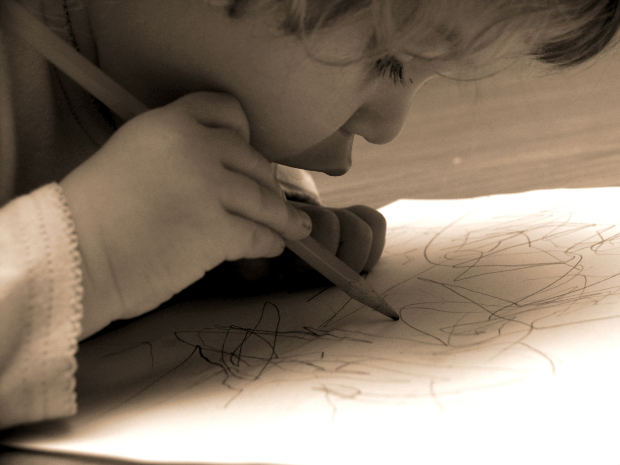 “Unleash yourselves, be spontaneous! Put something of you in it. I need to identify you, based on what you write “

That was the morning 11th grade English class, the person who was speaking so passionately was our new high school teacher Mr.Jai .You might be surprised to hear this, our teacher actually is a full time writer!, who took break from his work for a while and is teaching high school kids.

I have known Ravish since kindergarten, but never have I seen this angle of him never knew he was so smart!

He was the dumbest kid when it came to English, but now he is first one to shoot up his hand, his grades started increasing too.

Well ravish is not the only guy, the whole class becomes so active whenever Mr.Jai takes the class. May be there is magic in his words.

“That is exactly what I am talking about; you should each present to me a piece, that should have traces of you, as ravish said kind of signature”

Our excitement was broken by the long howling of the bell, “See you all on Monday with your assignment”

All the excitement in the English class made me forget about the big fight I had with my mother, I have to talk about it, with jai sir.

Who knows, there is a possibility of my mother turning up any moment.

I corned jai sir as he was just about to leave the class. But I was too late the school peon came at the same moment

“sabji ,principal sab ap donoko bularahe hai”(sir, principal has told me to inform you both to join him in his office )

Me and jai sir walked in silence to principal office, I know what is going to happen when I step in to the office , so I kept quite thinking about what might happen .

Jai sir also seemed to be thinking about something, for some reason he didn’t want to break the silence.

As we were about to enter prince’s (our principal, but we students have named him prince ) room I could hear a familiar yet distorted voice my mother was finally here.

The other two people, who were already in the room, halted whatever they were talking and turned to us.

My mother started jai sir like he was her arch enemy.

“Jai come in “said the prince with his cold husked voice

Our prince (should be called Mr. Poker face of the year, I couldn’t figure out what was going on in his mind)

“Jai, this is Mrs.Singani, Rahul’s mother, I am afraid to say you got hear how she talks about you!”

“Against me sir, I wonder what it is “ saying that sir winked

“Jay or whatever name it is listen to me, please change your methods of teaching otherwise I am going to put Rahul in another school, you know what just happened yesterday I caught Rahul reading a stupid novel in his room, where as he was supposed to read chemistry for his exams. And the worst of all he told his teacher here Jai has encouraged him to read novels, poetry that aren’t in his syllabus”, she halted for a minute; she was expecting some kind of reaction from prince.

“Even gave him some books and last week he made them rehearse for a play, depicting scenes for troy, when are they going to study when they are busy with this nonsense?”

“But Mrs.Singani exams aren’t anywhere near! what’s wrong in reading an awesome literature, Rahul here is a really creative guy, he told me wants to be a writer .So I encouraged him gave me few of my copies ,what’s wrong in that?” asserted Jai sir, I got to blame myself for putting him in this situation .

“What’s wrong? I want Rahul to be a doctor not a writer, how can I make my son a writer! if I encourage him now to pursue his career in literature, he will wind up as a teacher at a high school. Regretting why his parents made me take all stupid decisions in his life”fussed my mother, she has really crossed a line here, but neither Jai sir, nor prince got offended by that.

“I don’t understand what’s wrong with perusing career in literature, how many people in India are encouraged to be artists or actors ?, I chased my dreams and I will assure you I am more happier than I have ever been, teaching teens has always been my dream and I came her only to pursue it. Students across the globe are being encouraged to get be creative, innovative”
“today’s world doesn’t need people who are merely educated, it need challengers, out of box thinkers ,not yes men ,Indian education system is not designed in such a way.”
“Far back in 1920 it’s was designed to manufacture clerks and accountants, now its manufacturing doctors and engineers” jai sir retorted ,he has got a point, every since I have been in school I only by hearted all the stuff, never even looked how beautiful poetry or how amazing physics, math is!

I only studied in the fear of my parents and now to maintain my position in class, never ever have I learned something just because it was fun not until recently, that to because of jai sir.

“Jai is right Mrs.Singani, I have always wanted to change the system of teaching, but it wasn’t possible till we change our view on education. The great Philosopher Socrates had said “Education is not the filling of a vessel but the kindling of a flame”. The word Education itself comes from the word “Educere” which means to bring out what is already in and not blindly stuff in “

“School should be a place where you nourish what is already in every man, bringing out the best out you, with more people like jai as educators we can easily achieve this, India needs passionate educators, to change the paradigm ,I don’t find wrong with whatever Jai is up to “saying that he smiled at Jai sir ,it got me thinking , they knew what was going to happen, they prepared for this kind of situation, I felt proud of being part of the school”

My mom was looking quite red; she didn’t expect this to happen, she thought she will get her way, I am enjoying this

“I am going to school trustees, they won’t encourage such nonsense “mom roared and left

“See jai this is what you will face when you go beyond the horizon, I know you wouldn’t give up, this is just a start they will be hundreds of parents banging my doors soon enough, you and I are going to love this!”Said prince

I ran from there as fast as I can, saw my watch history period must have started 5 minutes ago, I already must have missed the starters don’t want to miss the entire movie ,
So ciao for now