You are here: Home / Childhood and Kids / Bluebells In The Woods… Short Story for Children 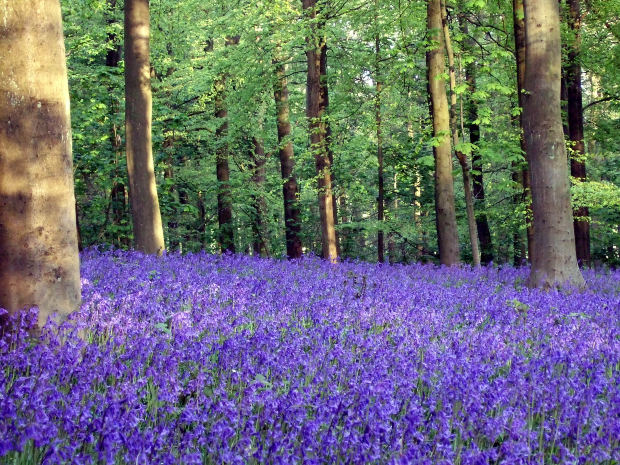 Bluebells In The Woods… Short Story for Children
Photo credit: caz1958 from morguefile.com

She was bleak. No one appeared to believe in her dreams. When she started to describe them with her vivid enthusiasm, her friends chuckled, her cousins told she was crazy and her parents never had time to give her their ears. Her dreams didn’t make any sense to them, because they had fairies involved in them, and who’s gonna believe in fairies and fairy tales now?

She remembered her grandma. It was her grandma, who told her all those tales, the tales which taught her to dream and believe in her fantasies. She remembered how earnestly her grandma used to listen when she told something. If she been with her now, she would have done the same. She would have made her happy . Grandma’s little girl could have felt great. She used to tell that fairies appeared only to those who had a pure heart and who believed in them. The thoughts made her eyes teary. Grandma assured her whenever the little one missed her, she would come near her and tell her a cute story. Ever since her grandma left for heaven, she became lonely. She felt as if her unshared dreams were strangling her.

She was having her vacation. She felt bored at home and thought of taking a walk around. Her parents insisted her to remain in their vicinity. She agreed and soon headed towards the small woodlands nearby. She was sure she could hear if her parents called her. It was summer and outside the woods the heat was so extreme that she doubted whether the sun was a dragon spitting fire to the earth enormously. The blooms were no more attractive as they got wilted in that extreme hotness. But surprisingly, entering the woods she thought she has stepped into a cold planet. The ground was moist and of course shady. She could see earthworm castings everywhere, which seemed like a chocolate pastry. She had a feeling that something or some one is attracting her into that woods. She took a few more steps forward and what she saw amazed her. She was still having her mouth open, wondering if it is another dream or not. She pinched herself. She could see that the ground of the woods were covered with a bed of bluebells, making it a violet carpet. She touched the flowers. They moved with a shy. She thought,

The woods were so silent. She heard the humming of the honey bees and saw the fluttering of the angelic butterflies. It was such an amazing sight. And she never knew bluebells existed in this part of her place. She was so excited that this was something she can show her friends and relatives, which they can’t deny, but believe. She listened carefully to hear some birds singing, but was surprised to find no birds around.

But someone heard her thoughts.

“No my dear, there are lot of birds here which sing so sweetly, the many marvellous songs,that you have never heard….”

She was shocked, that was her grandma’s voice; perplexed she looked around and found no one, except the woods all around.

“It is fairies’ prayer time dear, so only bees and butterflies are allowed to work. All others remain silent”.

“My child ,I know ,I know, that is why I have come to talk with you. Remember, I had promised you, whenever you miss me badly, I will be there for you… I have kept my word, my little one…. but alas, I can’t come before you as the same old Mutti, I can see you ,hear you, but you can only hear me, feel me… that’s the rule in heaven, my sweety… And, I shouldn’t forget to tell you this, you have grown up into a beautiful girl… who will turn into a charming lady soon”.

She blushed. She always believed her grandma’s words and was sad about the rule of heaven. But she was happy, she could hear her.

“These flowers are so beautiful… How come I have never known about them before?”, she asked her grandma.

Mutti reminded her of the bedtime stories. Bluebells were connected with fairies. She said they rang the bells of flowers to call each other and at the time of their prayer and that was such a prayer time. She again looked dazed at that blue carpet, dancing, passing violet waves across. Suddenly she felt like someone calling her name. She rushed, though she didn’t want to leave her Mutti.

“Mutti, I am going now… we can see later, mom is calling me…”. She didn’t wait for the reply and walked home hurriedly, panting heavily.

When she reached near her house, she could see her worried parents, looking for her. Seeing her, parents came running. Her mom hugged and kissed her. She could read from her dad’s face that he was worried and angry at the same time, but he remained silent.

“Where were you? Weren’t you told not to go too far?” She could hear her mom’s heart beating faster and harder, as she held her tightly.

“Mom, I want to show you both a beautiful surprise… Can you please come with me?”

Mom was not interested, “I have got enough work here, my honey”.

Her dad went back into the house without uttering a word.

She cried, “Please mom, at least you come….PLEASE!”

She was happy to show her secret to her beloved mom. They reached the woods.

”Why you came to this lonely part, you little devil! No one used to come here, don’t dare to come here again, it is not safe to be around, OK?”

She nodded a yes. She, together with her mom stepped forward, moved again and again and found nothing. She was trembling,

“Where is the blue carpet? The Blue bells?”

She pointed to the woods and felt like crying. No bluebells were there, she could see only the tall woods. Mom didn’t say anything, but she described in one breath, what she saw and heard there, a few minutes back….the bluebells and Mutti talking to her. Tears were flowing down her cheeks. Her mom hugged her again, kissed her and told,

“It’s okay my child, you can’t see Mutti any more.. She is with God.. Mutti’s voice and bluebells.. they are your dreams, JUST your imaginations ! Don’t take them that seriously dear. Come let’s get home and have some merry, I have got your favourite cake, cheer up, my doll !”

As they marched home, she turned back once again to have a last look at the woods. She felt guilty, she didn’t wait for Mutti’s reply. She worried whether Mutti was hurt by her haste and even doubted if she will be audible to her again, at some other place. She couldn’t believe that she had a dream, just a dream, a dream seen with her eyes wide open !!!