You are here: Home / Childhood and Kids / Little S And Her Last Pet 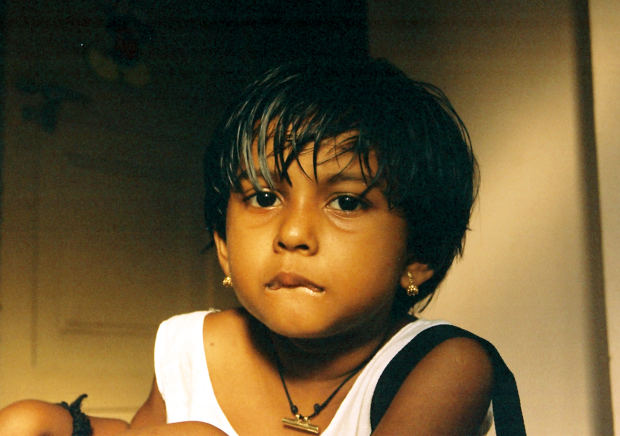 Short Story of a Child – Little S And Her Last Pet
Photo credit: kumarnm from morguefile.com

Little S had always been the apple of every one’s eyes. Being the only child in a huge family of aunts, uncles and a home constantly buzzing with visiting relatives, had many incentives. But Ajji, Nanu and Mummy ensured that S was never spoilt. Under their watch full eyes, S had learnt to understand by Ajji’s way of saying things, when to tone down her tantrums.

However, she also knew how to use a pout, a few drops of tears and a puppy face to pinch a few sweets and toys out of Ajjobaba and Nanna. Did I forget to mention, that the young lady was still three months shy of 4 years?

From sunset till sleep took over, she would pester Ajjobaba or Nanna for a new story every night. And the mornings, before she was chased off to school, were spent making new plans to steal yet another piece of coconut sweets from the platter laid out for the family gods.

The only trouble in Little S’s perfect little world was the constant disappearance of stray pets (read: puppies, kittens, a pigeon with a broken wing, a blind old parrot, a lost guinea pig, a chicken and many more), which she took under her wings, on every chance that she got.
The zealous fervour with which she would bring in her new pet was matched well by their staged disappearances. Her wails and early morning sleepy eyed search marathons never resulted in any successful discoveries of the lost pets.

How could they, when the house help had been instructed to ‘take care’ of the pets after Little S had bathed, fed (read: stuffed) and tucked it (read: burried) under heavy piles of rags (read: blankets) for the night? And in that first year of school, the frequency of her feathered / four legged friends had increased many fold.

It was a common sight, to watch her tiny form come marching in through the main door, carrying some stray animal (either struggling to get free or clutching her for its dear life). The house help would be manipulated with her stare-at-me-for-one-minute-and-melt looks and a honey sweet voice, to prepare for the pet’s (and most of the times – her’s too), royal bath and elaborate br-unch-ers (break fast, lunch and dinner all rolled in to one meal). The squeals of the protesting pet, mixed with Little S’s scolding and crooning would mark the end of the household’s short lived siesta.

Such evenings would be spent petting and cuddling the now sluggish pet. The grand parents would be pestered relentlessly to dig in to their mythological treasure troves for the most unique names for her latest pet. Mean while Mummy had to prepare a special delicacy (one of S’s constantly changing ‘favorite’ dishes), for the latest guest of honour.

Little S would then call Papa at work and tell him all about the latest pet in a lilting voice, blissfully unaware that Papa kept his phone on a ‘Speaker’ mode, so that the entire office could listen to her innocent and usually incessant chatter. Little did she know that her constant interruptions were eagerly looked forward to by Papa’s colleagues.

Life took a strange new turn, when slowly, Mummy began to look bigger than S thought she was. The grand parents and Papa seemed extremely happy, and kept petting Mummy’s belly, which now seemed to grow at an alarming rate. Her inquisitive questions were met with an over dose of kisses, hugs, laughter and strange statements about a ‘baby’ that Mummy was going to bring for Little S to play with.

Who needed babies when she could always bundle a pet home every afternoon, on her way back from school? And that is exactly what Little S had to say when Ajji smiled her mysterious smile for the umpteenth time. Mummy was free to give away the baby to any one she wanted to!

Weeks passed by and it was S’s first summer holidays. Mummy had disappeared the evening before, and the household had suddenly gone crazy. People were rushing every where and her bedroom was being frequented by the house help who seemed to be in a dazed state.

Little S had been told that the baby had arrived (read:popped out of Mummy’s tummy) and Mummy would be back home with her any time now. So the baby was a girl, Ajji had said, her very own little baby sister. Little S was to love her, share her toys, take care of her and always protect her, Ajji had instructed. “Like I do for Gauri the pigeon?”, Little S had pipped in. Ajji had laughed and hugged her tightly and muttered “much more than that Little S, much more than that!”

That evening, while Little S played with the pigeon, Mummy walked in through the door, carrying a tiny bundle of towels. She looked so tired and much like the Mummy, Little S remembered from before. But her attention was rivetted on the tiny bundle in Mummy’s arms, which had begun to cry now. Like a very small kitten, Little S thought.

Mummy beckoned her to come closer. But Little S could only stand and stare. Watching the bundle, or the baby, cuddle so close to Mummy had made her want to do the same too. But what if she went any closer and hurt the tiny being? Would Mummy be angry?

Little S had been handling baby animals ever since she remembered. But this was different. This was a prized possession for the entire household. Hesitating but still eager to be near Mummy, Little S crept closer. Till she could look over and beyond Mummy’s arms and beneath the wads of layered clothing.

One thing she was sure of instantly, this little sister would give all her pets a run for their money (read: food), when it came to wriggling, protesting against being swaddled and held so lovingly.

As Little S peaked around to catch the first glimpse of her baby sister, she knew that she would always always always love those tiny fingers and toes that had some how found their way out of the swaddled towels and blankets. And so, that was why and how the pigeon became the last pet that ever set foot (read: paws or wings) in this house hold for a long long time.