You are here: Home / Childhood and Kids / A Day’s Journey 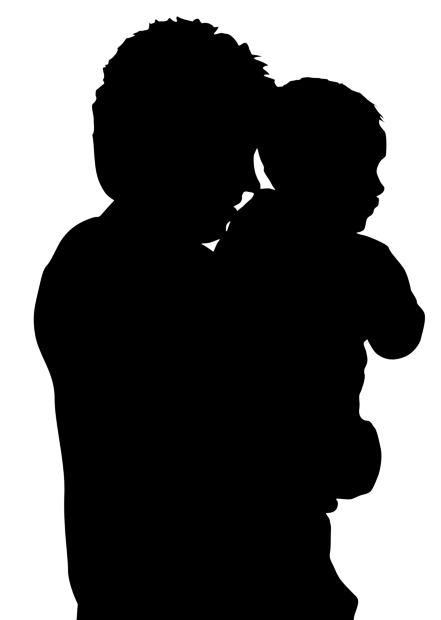 The train grunted lazily to a start and soon picked up pace. He looked out of the window gloomily, with his head resting against the pane. As he watched the rice fields rush past him, he thought of how his life too had been like a train ride in which he had whizzed past numerous milestones.

“After all these years why is she calling me now? Of course she has thought of her beloved son now…now that she is sure that there is absolutely nothing that I can ask of her, now that she needs me,” these were the thoughts that engulfed his mind as rage brewed inside him.

Suffering all those years of neglect patiently, had taken its toll. His mind was congested with anger, disappointment and agitation. All she ever did was dump him into that boarding school, where he had thought of her every night for twelve years but had never received a single phone call. He thought of how he would hide under the covers of his bed in the boys’ sleeping hall, after the disciplinary instructor turned out the lights at curfew. There, under the protection of his blanket, with a pencil in his hand and a flashlight between his teeth, he wrote her letters in peace. He remembered the excitement with which he gave the letters to his friend, Haider, to post when he went home for the weekend. But he also remembered the anguish he suffered when after his first year at school he stopped receiving replies.

Thus it was just a matter of time before all those birthdays forgotten, soccer matches missed, concerts skipped and graduations not considered worth attending had replaced his longing for her with sheer indifference. Instead he would receive packages in the mail, and it would always be some impersonal gift— a book, a football or a board game, which always looked like it had been packed in a hurry. Why did she never have a moment to spare to come around and kiss him goodnight, or to hold his hand when he was scared? Now that she was scared was it not fair that he leave her groping in the dark for compassion? For years he had given himself hollow assurances that she had tried to make it, but she had too busy a schedule to manage. But the day he realised that she had just never looked back, he shattered this illusion that he had so carefully built for himself.

In the spring of 1972, he finally saw her after 12 years. He had waited endlessly for that day to come but by the time it did he felt like he was meeting a stranger. Her congratulations were meaningless, her hug cold and hollow. This emptiness rubbed out the very last bit of love that he had preserved in his heart. In the years to come he received countless phone calls from her but on seeing her number he always passed the phone on to someone to make an excuse for him. He was convinced that the only reason she was calling was because she needed something from him. Then she resorted to telegrams and over the next nine years he received a multitude of them, but he refused to open up even one. A malicious satisfaction filled him as he thought of how, now, she would know that she meant nothing to him too. He collected each and everyone of those letters, not as a token of her love, but to one day hand them over to her and finally make her feel how he had felt in all those years…rejected.

However there was one letter he did open, that from her lawyer. The lawyer explained that she understood that he and his mother were not on good terms but it was absolutely necessary that he come see her. She elaborated that his mother had come very close to her deathbed and since his mother contracted Alzheimer’s disease, as her attorney it was her duty to hand over his mother’s property, a modest home, to her heir while she lived. He had decided not to go but his wife argued that if he did so he would finally be able to forget his mother forever, as if she never existed. Sitting in the train’s compartment, his collection of her letters lying in a carton by his feet, he realised that it was the first time in years that his mother’s thoughts flooded his mind. A strange curiosity panged from within him and he hastily picked up a letter from the top of the pile…his mother’s last letter. He read:

This is my last letter to you, because as much as I have denied it my time in this world is coming to an end. In all my previous letters I’ve always talked about the present or the future, never the past. I guess I was afraid of what your reply would be. I know you hate me for leaving you…what kind of a mother does that to her son? But you need to know that I will never forget the day I left you so far away from me. God knows I’ve thought about you every second of the day. I was desperate, scared really, when your father passed away and you were just a baby. I loved you and still do from the core of my heart.

My life was too clustered for me to impose it on you. I was doing two day jobs and even some night shifts at the cafeteria, just to pay the bills. I had no one to look after you, to feed you, bathe you or teach you all the things I wanted you to learn. I didn’t want you to have to take care of yourself; I never wanted my son to grow up before his years. My dream was to see you have a beautiful future; one you could not have had with me. Despite the way it crushed my soul, I sent you away so that at least I would know that you had eaten well, had slept in a warm bed and were happy.

While you were still in school you never wrote to me so I thought you had found out about my poverty and were ashamed of me, so I never wrote to you either. I didn’t want to intrude in your life, because you obviously felt no need for me. Coming to see you was something I could only dream of. I collected enough money to come to your graduation after many years of saving and begging my boss for an advance, and it was honestly the happiest day of my life. On that day I finally felt like all my hardships had been worthwhile. But even then I knew that you were pulling away from me, avoiding me whenever I tried to hug you or link my arm in yours. I guess, I should’ve expected it, after twelve years I had no importance in your life, and why would why?

I have made many mistakes in my life but I want you to know that there hasn’t been a moment when I have not thought of you, and I haven’t prayed for you and I have not loved you. I don’t know whether or not you will read this or whether you have read any of my letters. If you do, all I ask of you is forgiveness,

A moan escaped from his lips, sending a shiver down his back as he buried his face into his hands. Again and again the words echoed in his mind ‘You never wrote to me,’ ‘you obviously felt no need for me.’ “She never got my letters!” he gasped. Why? How was that even possible? And with a flash of realisation it all became infinitely clear as he pictured Haider pocketing the money that he gave him for postage, and throwing away the letters he had so painstakingly written. He grabbed his hair in absolute desperation as tears rolled down his face. But it wasn’t long before he caught hold of himself. Nothing mattered anymore. All he knew was that he was the most ignorant son a mother could ever have. All this time he had only been thinking of himself and never of her. Even after reaching maturity he continued to punish her for her mistakes, if he could really call them mistakes. He never even tried to find out about the kind of life she lived. Now he felt just like he had the day she had left him, empty.

The horn of the train blared as it halted at the station. Pushing all other thoughts away he sprang up, pushed his way through the passengers and jumped onto the platform with nothing but her address in his hand.

After a moments hesitation he rang the doorbell, which was muted by the sound of the blood rushing in his ears. It seemed like an eternity before the door creaked and she stood before him. She stared at him with her eyes widening by the second as she hesitantly raised a wrinkled hand to touch his cheek. He tenderly placed a hand on her shoulder and opened his lips to speak, “Amma…,” but before he could go on  she interjected, “Beta, what took you so long, chalo hurry up and wash your hands. I just finished cooking dinner.” He hesitantly followed her inside, and as he pulled up a chair at the table, with a somewhat perturbed look on his face, she asked, “So…how was school today?”