You are here: Home / Childhood and Kids / Town Musicians of Bremen – Short Story for Kids

“Chi… chi… chi… he… he… hi… hi… kids, do not be scared. I am your friend Die Hexe. Today I came to city of Bremen in Germany to tell you story of Town Musicians of Bremen.” …and Die Hexe started the story… 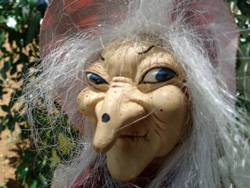 Once upon a time there was donkey who served his master for many years. But when donkey became old, not fit to work as he used to be, his master thought not to give him food anymore. Donkey became very disappointed and left his house. He traveled to Bremen to become town musician. Overall, he was very proud of the singing talent he had and thought it can be used for living in his old age.

On the way he met an old dog who was crying. Donkey came to him and asked the matter. The dog replied that he became old and no longer can hunt. His master decided to kill him rather feeding him for free; so he ran for his life. Donkey consoled the dog and asked to join him to become musician in Bremen. They both started to Bremen. Donkey decided to play flute while dog would beat drums. “It’s going to be melodious concert. People in Bremen would love it.” They daydreamed.

Soon they saw a pussy cat. She was just like them — old and weak. She told them that she became old and no longer can chase mice. Her mistress stopped feeding. One day her mistress took the cat to drown but then cat ran for life and now she did not know what to do. Other old musicians consulted each other and offered in chorus the cat to be part of choir with them to become musician in Bremen. Cat joined Donkey and Dog.

The trio continued to their destination. They went past a farm and found a rooster sitting gravely sad. Rooster told his story to the band, “I used to predict weather and was loved by all because of my melodious crows. But tomorrow guest would be coming home and lady of house planned to cook me so I ran for my life. Now I do not know what to do.” The musicians got a singer. They offered the rooster to join them to become musician in Bremen. The group of four went on together for a better future.

They entered in a forest and tried to settle under a tree, tired and hungry. Rooster, habitually, climbed on peak of the tree and started looking around. He saw a light coming from a distant, deserted house. He told the news to his fellow musicians. They all were hungry and decided to go to the house. They reached the house. Tallest among them donkey peeped through windows. Others asked desperately, “what do you see, you old fella?” Donkey replied that there was a celebration going on. A group of bandits were celebrating their loot by eating delicious food. 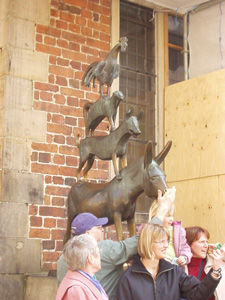 The musicians could not control their hunger. To see the food, dog climbed on donkey’s back. Cat jumped and sat on the back of the dog. Finally rooster landed on the cat’s back. Sight of feast was arousing their taste buds. It was difficult to control their hunger anymore. They decided to show their talents to the robbers in anticipation to get some food as reward.

In chorus, donkey started braying, dog barking, cat meowing and rooster crowing. Bandits turned to window to see the source of loud, scary and strange sound. Moment the bandits saw, in dark, the tall and strange structure built by four musicians, who were standing one above other and making the most horrible sound, the bandits got very scared. They thought it was ghost of the forest. They ran to save their lives, and never returned to Bremen – never ever in their life again. That day the musicians had the best dinner of their life.

“Chi… chi… chi… he… he… hi… hi… That’s all for tonight kids!!!” …and Die Hexe flew to next destination, flying on her magical broom.