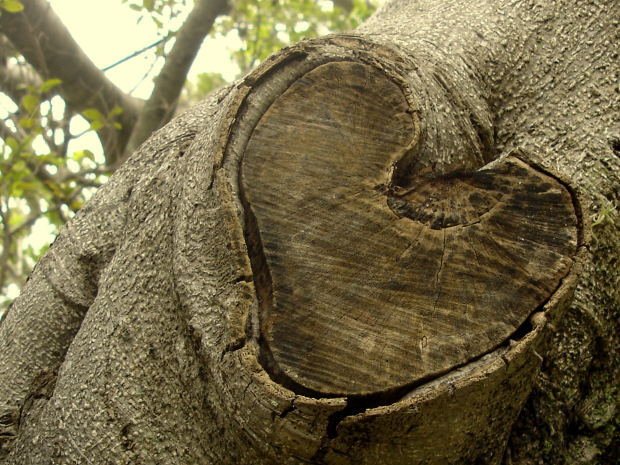 “IM SO BROKEN!” Kimberly cries and falls on to her knees hitting the bathroom tub filled with water.

Her eyes are red, her clothes are wet, and she kept the water running.

(Probably trying to get the whole apartment flooded. Who knows!)

The reason why she’s crying is that, her hottie ex boyfriend :Mathew. (cheated on her)

Mathew was her one and only (will be) love.

Kimberly hears her phone ringing out of the blue. Her best friend: Liam, ringed her but she doesnt want to talk to any one, so she throws the phone into the water and watched it die. (The phone die, LLN)

Kimberly is 17, and she just started going to college.

In the first few days, she finds her best friend in college: Liam and her (so called) true love: Mathew (who is now her ex)

Kimberly always wanted to be a fashion designer, have an awesome life partner and three kids of her own. And don’t forget five cute little dachshunds too. But now, her dreams have shattered.

She always get this thought. “There is no reason to live, now that Mathew has crushed her bones deep down in to the ground.”

As Kimberly was about to cut her hand, Liam rushes into the bathroom and opens the shower curtain.

He finds her wet and about to cut her hand with a blade but wasn’t interested that her body was half dressed. He grabs the blade and pulls her out of the bath tub.

“Are you out of your nuts?” Liam asks. He looks really mad. He sees the phone resting in the bottom of the bath tub. “Why didn’t you even pick up my call?”

Kimberly didn’t say anything. She was speechless. She really can’t argue with Liam when he’s pissed off. He was kinda hard to compete in a debate with.

Kimberly opens her mouth to say that she was sorry but Liam puts his finger over her lips and says, “Don’t tell a word to me.”

Liam scoops Kimberly up and takes her out of the bathroom and comes near her bed.

Liam puts her down and says, “Put on a t-shirt and think before you do or say anything.”

Kimberly gets up and finds for a t-shirt that would actually cover her body.

Her clothes were dripping with water and Liam says, “And some new jeans too. We are going over to my apartment for tonight.”

Both of them, went to Liam’s apartment.

When they were going to Liam’s apartment, not even a sound jumped off from Kimberly’s mouth.

She was mostly scared of Liam, cause Liam is bigger, elder and specially her best friend.

When coming for fights, she usually kept quiet until Liam is calmed down.

Liam’s apartment is just next to Mathews.

When Kimberly and Liam, went to Liam’s apartment, both of them heard a girl’s voice coming out from Mathew’s apartment.

This is something Liam dislikes.

Liam storms out of his apartment and opens Mathews door.

He goes inside forcefully and whacks Mathew for what he did to Kimberly.

Kimberly just sat there in Liam’s apartment crying, she could hear all the fighting happening.

Liam comes back to the apartment informing that he just gave Mathew a blue eye.

Kimberly was so unhappy but Liam did everything he could do to get her to smile.

The next day, Kimberly woke up and remember nothing at all about last night.

But still there was no smile appearing in her face.

She got out of Liam’s bed, noticing that he’s sleeping on the couch, she went near a mirror and brushed her long black hair.

Kimberly got dressed and went outside to get some breakfast.

As she put on Liam’s jacket, she finds a yellow piece of note, it says “Jennah 4pm, Grason Ave.”

Kimberly was happy about this.

She put the note back inside the pocket and went outside.

Liam got up and started panicking!!! He’s finding for the note.

Kimberly was just walking in the street, finding something to eat while Liam was running around the room.

Kimberly finally took some food and headed back to the apartment.

Finally, Kimberly came to the apartment and saw Liam ; sitting on the edge of the bed, with his elbows on his thighs and his head resting on his palms.

“What’s wrong Liam?” Kimberly asked as she came and sat next to him.

Liam saw Kimberly wearing his jacket. Liam took the jacket off of Kimberly.

He eagerly put his hand inside the pocket and a smile came across his face.

He took his hand out with the note and said “Thank god, it’s there!”

Kimberly smiled and said, “I read it!”

Liam smiled even more and said “Jenna is so amazing!”

“Long Brunette hair, tall but not taller than you and she have these cute green eyes.” Liam said.

Kimberly looked at the clock, its 11am. “Why dont I get you ready for the big date?” Kimberly gave a big smile!

“Okay! Just make me look like ‘I have been waiting for you my whole life’ kinda thing?” Liam asked.

“Sure!” Kimberly said as she pushed Liam inside the bathroom to get a wash.