You are here: Home / Friends / Zombies in the market 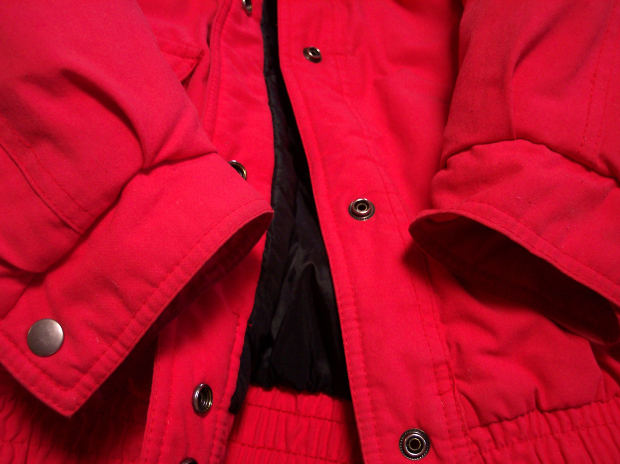 A busy market in a small town is full of various kind of shops starting from jewellery to shoes. Various & all kinds of colourful & simple products are up for sale. The whole market is crowded by people shopping all round the place. Everything seems normal as it should be until this would not have happened.

Lucy is out to buy a new overcoat for her mother as winter is coming. Autumn is about to end & the winds are quite cool now.  It’s late evening by now. She has just finished off with her work & going to reach the market. She gets there & still the rush hasn’t eased now. Due to upcoming festival of Halloween it’s quite menace in the marked. All shops being filled more than its capacity. Except one in the right corner beneath a tree unlike others & empty.

Lucy feels  she is lucky to find an empty shop selling overcoats in such a chaotic market. She quickly moves towards the shop since it’s quite late & she needs to return her home after purchasing gift for her mother. She enters the shop but the owner cannot be seen anywhere. She waits for sometime & starts looking at the overcoats kept in the market. She likes the one worn by a  mannequin & so takes it out off  it & tries wearing herself.

As  she wears it, she feels that she is dying for no reason. She is unable to breathe & she fells down on the floor unconscious. After five minutes the shopkeeper comes & lifts her up & throws water on her face. She wakes up with her eyes red. She bites shopkeeper’s hand & runs away wearing that overcoat. On her way whosoever comes she bites them & those bitten by her show the same behavior as of Lucy. In a small time the whole market is full up of people madly biting each other & those who come in their way.

Lucy is an atheist & doesn’t believe on God nor on ghosts. Her friend Jack luckily comes there searching for her. She even tries to bite him but he saves himself & in doing so he pulls out her overcoat. As he does that she lies down unconscious. He lifts her up & takes her home leaving that overcoat lying down on the road. He reaches home & puts Lucy on her bed & calls her mother informing her about the whole incident & also that she is with him.

He switches on the TV & hears the amazing news of the place where she has just left out. He cannot believe his ears. All  people of a market have got mad suddenly & have started biting each other. He cannot understand what was happening & no one can. He starts thinking that Lucy was also there & she also tried biting him. He goes & locks Lucy in her room & moves out to the market to know what was happening.

As he moves over there he can see people in utter panic following each other to save themselves. He moves ahead. He finds himself crowded by a group of  people who want to eat him out. They try to attack him just as Lucy did but aren’t successful. Jack is protected by a great power, power of the God & he is a born angel of God to save humanity but he doesn’t know himself.  He is a firm believer of  God & always wears a cross in his neck.

He moves to a church to take shelter & there he sees the priest. He goes & tells him about everything happened to him. Priest closes his eyes & after tells him to destroy the overcoat which Lucy was wearing to save her & others from epidemic. He has only few hours to do so. After some hours all things cannot be reverted & devil will regain power. He has used that overcoat as a measure to gain entry into this world. The shop from where Lucy brought it was built on a place which was earlier a door to the devil’s house & entry to his world. Before he comes back Jack has to destroy the overcoat. He is running short of  time & needs to destroy it.

He quickly runs out of the church & looks at every nook & corner of the market throwing zombies which come in his way. They are half dead & would be full once the devil returns. He cannot find that overcoat anywhere still he doesn’t lose hope.

He reaches to the same shop where Lucy went & finds it on a mannequin wearing it. He identifies it due to blood stains on that overcoat of people whom Lucy had bitten. He quickly burns it & goes back home. He switches on his TV & is glad to hear that all has become normal again. He goes to the room where Lucy was locked & opens to see her nowhere. Where has she gone? She calls her mother & she hasn’t gone over there. He reports about it to the police & they are still searching for her. Five years have past by now & she is still missing. Where has she gone?