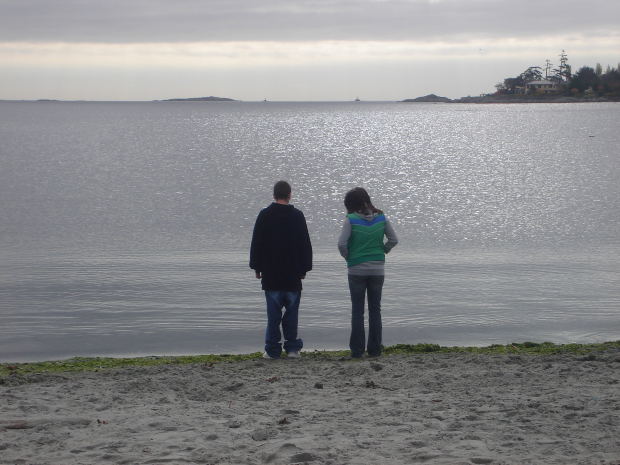 Story of Friends – Finding out the truth (1)
Photo credit: kornrolla from morguefile.com

Chris has secretly liked Mary for a long time. However, his best friend, Tom, was in the lead and got together with her. Whenever Chris saw them holding hands, he could hear his heart crack. And when they hug or kiss in front of him, he would slightly turn his head away to avoid the slow killing pain reaching his chest.

But Chris discovered a new hobby, jogging. It was an activity to release his pressure from school, grades, and most of all, his best friend and his crush gazing into each others’ eyes when they were hanging out. He had once told Tom that he didn’t want to be the third wheel whenever they were hanging out. But Tom told him that he and Mary didn’t mind at all, and he wanted to have all the fun with the two closest people in the world. And poor Chris, he was often invited to ”have fun” with them. In order to vent out all his stress, he tried jogging. And it turned out great because he could feel the massive amount of relief after his run beside the river.

Chris had a fantasy of taking a stroll with Mary beside the beautiful river in the evening, where the sun dims itself and paints everything red and yellow. The river would flow toward the setting sun whereas the smooth surface would shimmer as it tenderly lies on the bricks at the waterfront.

They would be crossing fingers with each other and occasionally glance into their partner’s eyes, as they proudly walk beside those unfortunate people who were here to see the sunset alone. After that, they would sit on a warm bench, which absorbed the temperature from the mild ball of flame up the sky, as he flickers her hair and leave a light peck on her forehead. As the sunlight diminished and the sky started to turn dark, he would gently place his jacket over her shoulders and hug her tightly to protect her from the cold winds at night.

Therefore, he would jog along the slowly running river ever evening and return with the biggest smile on his face as the only thought left with him was the fantasy with him and Mary talking the nicest walk together. “And she deserves the best.” Chris has always said to himself after his jog.

Chris was taken aback when he saw Tom kissing another girl from school, Susan while he was jogging along the river in an evening. Chris immediately hid behind a big tree to make himself scarce, but he still could not believe his eyes. Anger was the second emotion that took over his head, so he took out his cell phone and took the photos of the cheater and the slut who was kissing him. Right when Chris was about to send those photos to Mary, a strong feeling discouraged him. Instead, he made a call to his ”best and loyal friend”. But Tom ignored the phone call and continued flickering Susan’s hair.

When Chris was about to go and strangle Tom’s neck, he received a call from Mary.

“Hello Chris?” the sweetest voice calmed his rumbling emotions. “It’s a surprise you would pick up. I thought you’re running.”

“Nah, something suddenly came up.” He suppressed his tone.

“Are you alright? You sound like you’re under a lot of stress.”

“I am fine. Just trying to recover from my heavy panting from the jog. What’s the matter?”

“I’ll make it short. Tomorrow is me and Tom’s one-year anniversary. And I was wondering if I should bake him cookies or buy him a T-shirt of his favourite band?”

“That ba##ard deserves nothing from you.” he mumbled to himself as he watched the cheater hugged the sl#t.

“Oh, sorry. Wow! You know how to make cookies?”

“Yeah. I took a class this summer. It was fun. So, cookies or T-shirts?”

“Great! I knew you would choose my cookies. But I would like you to help me buy some of the ingredients if that’s fine with you.”

“Sure! Anything you need.” He answered quickly. He would do anything for her.

“But aren’t you dealing with something?”

“It’s not that urgent anyway. I will buy those ingredients you need.”

“Great! I will text you the recipe afterwards. See you at my house tonight.”

Chris clenched his fists as he turned his head away from the ba##ard. “I will hunt you down and kill you later, Tom Turner.” He said to himself as he stormed away.

At seven o’clock that night, Chris rang Mary’s doorbell with a heavy heart. There were lots of problems in his head. He didn’t know how to tell Mary the heart-shattering truth and he didn’t know how she would take it. And most of all, he didn’t know how much longer he could stand the guilt of not telling her the truth while she was happily making cookies for that prick.

“Hi. Come in.” She gave him a sweet smile. “Let’s get started right away. Everything is prepared.”

He returned a forced smile and walked into her kitchen. He placed all the ingredients on the table and waited for her orders.

“Thanks for buying the ingredients for me.” she grinned and handed him a small pile of cash.

He slipped them into his pockets and said “You’re welcome. Always glad to help.”

“Listen, I’ve got something to tell you….” He couldn’t hold it in anymore.

“Oh, have you seen our portrait?” she exclaimed thrillingly as she ran toward her bedroom and returned with a painting. Chris was amazed by the portrait of Mary and Tom. The artist expressed every detail of them. It was like standing in front of the real couple.

“Wow. It’s fantastic. It captured all your beauty and essence.” Chris praised. “This must’ve cost you guys a fortune.”

“We didn’t hire anyone. This is the work of Tom’s friend, Susan. And she can draw such amazing works.”

“And she sure can draw men away from their girlfriends.” Chris vented inside his head. He nodded and pretended to enjoy the portrait.

After Mary had put away the painting, she started to make the cookies. But she rejected the assistance from Chris and told him to sit on the sofa to wait for her, as she wanted him to taste the products and make improvements afterwards.

“Look, Mary, I really got to tell you something before you make……” Chris tried again.

“No. I don’t need help. Take a sit on the sofa and relax. I am sure you will love them once they’re out of the oven.” She walked into the kitchen and shut the door.

He fell onto the sofa and scratched his head crazily. He had been lying to her whole day. He should’ve told her the truth when he had the chance. Now Mary was all agitated and excited about celebrating the anniversary with that traitor tomorrow. He should be accounted for her misery once she finds out about Tom and Susan. What kind of a friend won’t be honest with each other even if telling the truth hurts? While he was tangled by all sorts of accusations from his conscience, Mary grabbed his jaw and stuffed a chocolate chip cookie inside his mouth. He coughed heavily as the cookie went down his throat.

He finally managed to swallow and said “Thanks. I am ok.”

She brought him a glass of water and apologised again.

“Perfect. Let me make the rest for tomorrow while you sit down and enjoy this batch.” She clapped her hands and raced into the kitchen.

He could not take it anymore. Tom doesn’t deserve a fine girl like Mary. So he took out his phone and texted Tom.

“Hey, I got something important to discuss with you. Where are you?”

He quickly finished the tray of delightful cookies and sneaked out of the house.

He burst into Tom’s flat and dashed in front of him.

“You lying ba##ard. How could you do this to her!” Chris grabbed his collar and punched him in the face.

He then took out his phone and showed Tom the photos he took earlier that day.

“I think there’s nothing you can say for yourself.”

Then came a moment of silence. Chris was venting out his anger through his noses like a bull as Tom crawled up the nearest chair and rubbed his bruises.

“Tell her.” Chris said coldly as he dialed the digits.

“Wait. Please.” Tom stopped for a choking cough. “I don’t want to hurt her.”

“You already have, smartass.” Chris stared at him. “Now take responsibility.” He turned on the speaker as the phone dialed.

Finally, Mary’s worried voice appeared on the other side.

“Hello, Chris? Where have you been? You promised you would try my cookies.”

“Mary, I think Tom has something to tell you.”

“Please, I have been trying to tell you this all night. But I think he should be the one telling you the truth.”

“Babe. Please be quiet. I have something important to tell you.” Tom shouted. When there was total silence on the other side, he continued “I am sorry. I have been cheating on you…”

“Her name is Susan. She is my classmate and we have been seeing each other for a few months. I am truly sorry, Mary.”

There was another long moment of deafening silence.