You are here: Home / Friends / The magpie robins 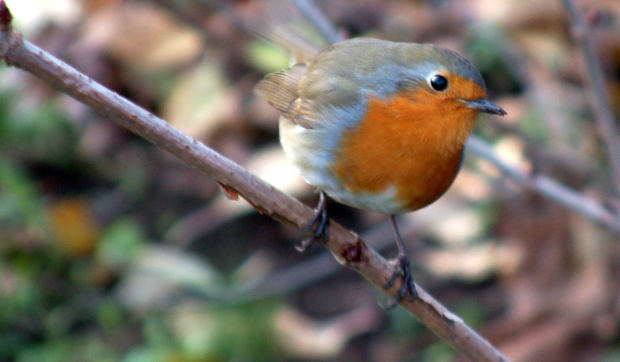 Liz looked out of the window desperately, but couldn’t find them.  Never had she become so emotional in her life. The two tiny black birds had made a permanent place in her heart.

It all happened some two weeks back. Liz heard a strange whistle which seemed so unfamiliar.  Looking out of the window, she saw two tiny black birds perched comfortably at a distance.  The melodious voice was so strong and beautiful that Liz couldn’t take her eyes off them.  One of them was distinctively black with white underparts and feather and a black tail cascading up and down while singing whereas the other was having the same features but a duller black appearance.  The former was a male and the latter,maybe a female, thought Liz  . Both sprightly and lively, there was something that attracted Liz towards them.

Their frequent visits to the opposite lamp post and entering it through the opening on the top, made Liz all the more curious . She presumed that they had probably built their nest inside as the female was very active in carrying the materials for the nest buiding whereas the male was fiercely protective about the territory . Any intruder was chased and aggressively driven away.

After a few days , Liz noticed somewhat like an insect in the beak of the female. It went inside the lamp post and immediately returned back. The male ,too did this very often. Liz put some grains on her window sill .The male, without any hesitation, flew, took some in its beak, and gave it to the female. The female went into the lamp post and returned after a few seconds. Now, it was confirmed that they were feeding the younger ones maybe a day or two old.  It was such a delight to see the affection they had for each other and for their little ones.

It had become so habitual for Liz to watch these lovely ones that the first thing that she did after getting up in the mornings was to open the window and look out for them. In fact, it was their singing that woke her up each morning. She never forgot to put the grains for them . She had become so attached to these two tiny creatures and the different types of sounds they produced, some romantic, some warning calls, some beautiful long whistles moving the tail up and down in synchronization with the sound that not a single day passed without seeing them..  There were ravens, myenas, sparrows, squirrels and many other birds in plenty  but the liveliness of these two stood out and always caught the attention of Liz . They had become a part of her . It was as if they had cast their magic spell on her. This continued for a week or so.

One fine morning, Liz heard a faint whistle. She hurriedly opened the window and peeped out . She saw the two frequenting in and out through the open window of an empty house on the opposite pavement. They looked a bit dull and sad, often coming to the lamp post ,looking in and flying away. What could be wrong, thought Liz. Were their young ones carried away by the ravens ? Why were they so dejected?  They did not nibble the grains, too.  Liz felt very restless . How she wished she could communicate with them and share their grief.  She kept a watch on them the whole day.

The next morning as usual Liz opened the window but the two were conspicuous by their absence . They were neither at the window of the empty house nor at the lamp post. Liz waited in anticipation that they would return to their usual abode. She sorely missed their vibrant and vivacious presence. Everything around seemed extremely lifeless for her. The thought of not seeing them again choked her. She had a vague feeling that they must have migrated. A week passed by. There was no sign of these two tiny creatures with whom she had developed a special bond that only she could feel and comprehend. Each night she would offer a special prayer for them.

Then one fine morning, the same familiar whistles assailed her ears all of a sudden. I may be dreaming, thought Liz. But the voices seemed very near . Not wanting to miss this golden opportunity of reunion, Liz jumped out of her bed and went close to the window. Yes, she could clearly perceive them. She was astute enough not to disturb them lest they resent her intrusion. God had listened to her prayers. She slowly opened the window. They flew and sat on the branch of the nearby tree. Liz couldn’t take her eyes off them. Their dark eyes and beautiful features were alluring. They started nibbling at the grains that she had put.

This became a regular feature. They had become her best friends. When they were hungry, they called out and Liz would run out to meet them . When their calls were subdued ,Liz would just sit there and listen to them. When their  calls were loud and piercing, Liz would watch them ,flitting from one tree to another ,so lively and full of energy.  Both Liz and the magpie seemed to have understood each other perfectly well. How strange it was that there could be such an inseparable bonding.

The whistles and the two magpie robins had become a part of her life.