You are here: Home / Friends / MY LOST FRIEND WA 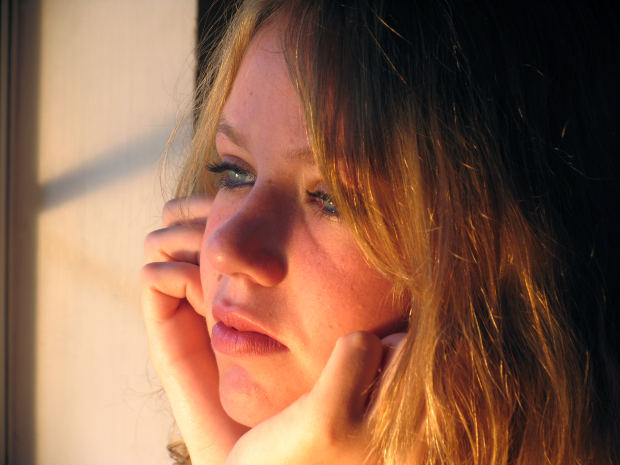 He came to break the monotony of my boring life. He was my soul-mate, my partner, my friend philosopher and guide. But today, without even a trace of remorse, I can say that I have bid him adieu for the rest of my life. Now, about who this ‘he was’.

He was my Whatsapp or Wa as I used to call him lovingly. Please don’t write me off as a lunatic ventilating pointless thoughts. At least, not yet. Why, anyone who knew of our camaraderie would agree that my Wa was nothing short of a real friend or rather, a boyfriend. He was my most trusted companion.

Oh, what a sweet relation it was and how it all turned sour. It was at a friends’ gathering that one of my friends introduced me to Wa. Initially I was a bit shy to befriend him. He was so loud and boisterous while I was the timid, nail biting type. Despite all odds, our friendship blossomed and we got along like a house on fire. Every day I woke up to his ‘good mornings.’ All through the day, he would talk to me. Sometimes he was jovial and funny and sometimes very solemn. His jokes were so funny that I laughed till my tummy ached. When he was in a somber mood, he would give sermons on philosophy, spirituality and what not.

He showed me beautiful pictures of all the places that I had not visited. He even kept me updated on what is happening in the world. I, who regarded newspaper as a piece of paper used for cleaning windows, became an expert on current affairs. I could see the envious faces of my friends and family when I put forward my opinion on every topic that mattered. Nobody suspected that they were in fact, Wa’s opinions rubbed on to me.

Slowly my whole life started changing. My days and nights were filled with thoughts on Wa. Every day I woke up with the thought, what can I do today that will impress Wa? I started doing things for which I never had a passion. Flowers were Wa’s favorites. Sensing this, I started gardening so that every day I could show him pictures of new flowers. I even learned cooking and tried experimenting with pots and pans, although most of them had disastrous consequences. He pacified me “Don’t worry. We’ll make a nice picture out of your cooking trials. A nice picture will make up for the bad dish.” He had a solution for everything. All was well for the first few months. But as they say, good times don’t last forever.

When did I notice the trouble in paradise? Yes, one day he showed me a picture of one of my cousins. “See how beautiful this girl is. You both are from the same family, but you are not half as pretty as her.”

I was annoyed. I knew that she was much prettier than me, but to hear it from Wa?

“Well, obviously, we have not inherited the same genes”

I tried to put the matter aside as a tasteless joke. But that was just the beginning. He gradually started taking control of my life, without my realizing it. Another day, it was the picture of an unknown continental dish that he showed me.  “See, your friend has made this. Why don’t you go ahead and tell her how delicious it looks?”

For some reason, it irritated me. “Come on, Wa. How can you say that this is delicious just by looking at its picture? Besides, she is just a friend of my friend’s friend, whom I haven’t even seen.”

“You are clearly jealous. Just because you can’t make something so good, you don’t want to appreciate somebody’s talents,” he snapped at me. I just shut him off and walked away. Ten minutes passed and he was again beside me with his sweet nothings. I was willing to let go and forgive.

But things kept turning from bad to worse. Every day he irked me with some useless comments. While I was ready to go an extra mile just to keep our friendship alive, he never shied from making ruthless comments about everything I did. I started getting the negative vibes from him, maybe I was not good enough for Wa. I was hanging to the end of the thin rope when the last blow struck me.

One of my so called friends showed us the pictures of herself taken during an overseas trip. The very next moment Wa was by my side, pestering me. “Have you ever gone on a foreign tour? I know you haven’t. Why don’t you pack your bags and set out to some exotic destination? Just think of the moment when all of your friends will see the pictures. Visualize the look of envy on their faces. Isn’t the very thought too exciting for words?”

I was so mesmerized by his words that I straightaway started searching for the best deals. It was only after a while that the stark reality dawned on me. How could I even think of a foreign tour when I was barely making both ends meet? I tried to knock some sense into my best friend. “Wa, this is just idiotic. I don’t have the means to go on a tour like this. You better hold your tongue and don’t give me more trouble than I can handle.”

But he was not one who would give in so easily. What followed was more of a mental torture than a friendly advice. The thin rope I was hanging on to, had broken. I screamed at him “Don’t think that you rule my world.  I made you my friend for my happiness, not to suit your whims and fancies. Let me remind you that I am not your slave.”

Horrified is the word that would least express the feelings I had when I saw the beastly smile on his face. He lashed out at me “Of course you are my slave, you silly fool. Have you not realized that yet? You obey my commands. Your whole life revolves around me. And the fact is, you can’t live without me even for a few hours.”

I was caught off guard. This was a plain revelation of the truth. But no, I would not accept defeat. In an attempt to take control of the situation, I blurted out “Ok. That is what you think. I will show you who is the master and who is the slave”. I uttered a feeble good-bye and slammed him shut.

But as Wa said, it was difficult to live without him. Every small electronic beep reminded me of him. My days lost their charm. Once or twice, I was on the verge of giving up the fight. But the monstrous look on his face came back to my mind every time and I got back my resolve. Slowly, very slowly I regained my life before Wa. My family was my biggest support although they hardly knew the trauma that I had endured.

Today is the first anniversary of my split up with Wa. And surely life is much lighter and brighter. Now I live life for myself and my family. There is no need to prove to any one that I am having a blissful life. If any of you happen to have a Wa as your best friend, my advice to you is to try dumping him for a while. Believe me, you won’t regret.