This short story is selected as Story of the Month February’2016 and won INR 1,000 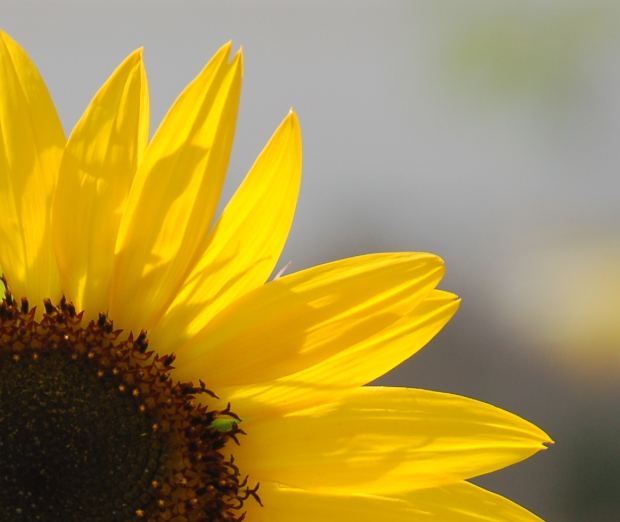 “Can you compose your own story for the ‘Creativity Galore’ contest?” asked Lithiksha to Shakthi, during the lunch break in Seventh Day Adventist School.

“I hope I can. I have to work on it. You know, it takes time to compose a story,” replied the 14 year old Shakthi.

“Well, but I can’t see the creativity in you. You are a bad writer with an illegible handwriting. I have read some of your stories which you had written last year. But they didn’t make any sense to me.” Lithiksha’s harsh words sent poison darts to Shakthi’s heart. She was offended easily. The stories which she had written had gained schoolwide appreciation. But her so called new best friend was taunting her. Yet she put up a brave face and replied, “You could have told me last year itself. I’d have improved my writing skills. Why didn’t you say so?”

Well, I didn’t want you to become a great writer. I will never allow you to excel in writing, Lithiksha thought to herself while replying, “You weren’t close to me last year. Krithika was your best friend. Unfortunately due to her transfer, you have chosen to be with me.”

Though Shakthi could see through Lithiksha’s pride, she did not speak back. Staying calm during haters’ speech was something which she had learned during the course of her writing. My day will arrive, she quietly thought to herself.

“And the first prize goes to Lithiksha for her story ‘Dancing in the rain’,” announced the principal. Lithiksha’s walnut skin gleamed with happiness as she went to the podium to receive her prize and join the other winners Mridul and Harini. While receiving the certificate, her eyes wandered to find Shakthi and flash her a wicked smile. But the latter was not to be found in the auditorium. Puzzled, Lithiksha alighted from the podium and searched through the crowd of smiling faces for the girl who could not win the prize. At last, she found her standing along with the Chemistry teacher Ms.Alisha. Plopping down on a nearby chair, she began overhearing the conversation between the two.

“I really loved your ‘Emotions beyond words’ story. It was deep, heartwarming and sentimental. It left me with a lingering taste long after finishing it,” said Ms.Alisha, while patting Shakthi on the shoulder. A surge of jealousy passed through Lithiksha’s heart. Though she had won the first prize in the competition, not a single soul had given her feedback about her story.

“I was in an enchanted mood while penning the story ma’am. That made me to write it perfectly. But I think it didn’t go down well with the finalizing jury,” Shakthi gave a pained reply.

“That’s okay Shakthi. You needn’t worry about it. A good story must win hearts, not prizes. Your story has done that. I hope you’ll receive many personalized appreciations like mine.”

“Thank you so much ma’am. This really means a lot to me,” replied Shakthi with a warm smile. After shaking hands with her, Ms.Alisha left her alone. Lithiksha could see the twinkle in Shakthi’s eyes. I must destroy her happiness. Thinking so, she moved towards Shakthi.

“Hi Shakthi, I am soooo happy. I never thought that my story would win the first prize.”

“Congratulations Lithiksha! I am happy for you. I liked your story. It was simple yet elegant in terms of the plot.”

“Yeah, even your story was good. But I thought that it wasn’t good enough to win a prize. It lacked depth. I could feel that something was missing in it. I just cannot describe it.”

“Really? Well, I am happy that my story has touched a few hearts. I don’t need the prize. Appreciation is what I love.”

Lithiksha’s face twitched. Ha! This girl isn’t budging. Let me try some other comment to destroy her happiness.

“Well, but my story had touched the main jury’s heart. That’s what a good story should do. To make everyone feel along with the character, instead of making a few people feel. Are you planning to become an author Shakthi?”

“Yes, I am. It has been my dream since my childhood.”

“If you are planning to become one, then you have to hone your writing skills a lot. Read more books, improve your writing style and get your grammar correct. Okay?”

Calm and composedly, Shakthi replied, “Okay sure, I will. By the way, what are you planning to become?”

“I am planning for a government job as that will be life settling and also I can earn enough money to run a family. I cannot imagine my life as an author as that wouldn’t suffice to lead a productive life. Writing will never satisfy my financial needs. It’s just a hobby for me.”

“Oh no! Please don’t demean writing. It’s my passion, not a mere hobby. And there is a difference between hobby and passion. Many wouldn’t understand that. So, I cannot stand if someone thinks cheap about writing. Especially, it shouldn’t come from a girl who has won a prize for her work. Good luck for your government job!” exclaimed Shakthi with a genuine concern.

“Thank you, good luck to you too!” Lithiksha’s reply was sarcastic. She ignored that ‘writing’ advice from Shakthi. Pride had swallowed her a long time ago. Hence, she wouldn’t pay any heed to a girl whom she thought inferior to her.

Days passed away. Lithiksha and Shakthi successfully completed their 10th grade and parted ways for their 11th grade. It was a refreshing change for Shakthi who had been continuously subjected to Lithiksha’s goading remarks.

“Have some hot tea dear. It will refresh you and make you to study well,” said Lithiksha’s mom as she placed a glass of steaming tea on her study table.

After gulping down the tea, she grabbed her book with renewed energy and flipped the pages. She reached the General Awareness section and began studying it. As she reached the 11th question, her eyes froze. She hadn’t expected such a question to pop in front of her. Never in her life.

Lithiksha immediately browsed for the book and its author. The search results threw up pictures of the girl who was her then best friend. The same girl whom she had loathed. That girl whom she had prevented from becoming a good writer. She was a published author, a world renowned one that too. She was also the highest paid author of India. As she kept staring at the name ‘Shakthi Menon’, a flood of memories submerged her. A feeling of regret passed through her. She couldn’t believe her own eyes. The girl whom she had ridiculed, derided and mocked was a world renowned and a fan-friendly author. And she had been ignorant of that fact.

At the next instant, she connected to Facebook and searched for ‘Shakthi Menon’. Sure enough, there was an official page for Shakthi Menon with a blue tick mark beside her name. The page had received 2 million likes. Shakthi had written not one, but five books on the whole and all were bestsellers. Lithiksha’s eyes bulged out. After her 12th grade, she had quit writing, reading books and also visiting bookshops. Hence she was oblivious of such an author. She frantically reached for the Message option and typed out a message.

Lithiksha Parvi: Hi Shakthi, do you remember me? I was your best friend in 10th grade. I am very happy to know that you are a Booker Prize winner and also a famous author. Hope you remember me, though it has been seven years since we lost touch.

After hitting ‘Enter’, she impatiently waited for Shakthi’s reply. She wanted to mend her ways by genuinely befriending her.

Shakthi Menon was seated beside her bedroom window, enjoying the cool sea breeze. She visited her Facebook page for a status update about the weather. It was then that her messenger popped with a message. It was from a girl named Lithiksha Parvi. That name rung a bell inside her mind. Curious, she opened the message.

After reading it, she typed a reply.

Shakthi Menon: Who is this? Sorry, I don’t remember having such a ‘friend’. Sorry!

After all, Lithiksha was the driving factor of Shakthi’s life. Jealous, but still a catalyst for her. If it wouldn’t have been for Lithiksha, Shakthi would never have become an author. Her rude remarks echoed throughout her pained mind while she had penned her bestsellers. She had wanted to get back at her then fake best friend. And she did it. But now, the same Lithiksha was trying to befriend her again. Well, success brings people closer. But I will never let her spoil my life yet again. Toxic girl! My reply will teach her a lesson, Shakthi thought to herself.

Even after eight months and having seen the reply message, Lithiksha never replied to it! She could only dwell in regret and embarrassment. Shakthi had indeed given a fitting finale to an abrupt tale.