You are here: Home / Friends / Ring of Sielis 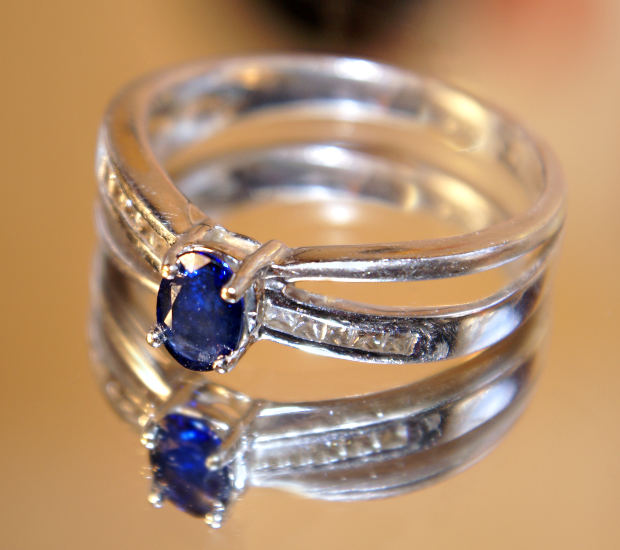 “I am tired” whined Rohan Longshore to his friend Joe Genman.

The boys, both aged fifteen, were on trek through Ezhumala Forests; part of the seven day vacation their families had booked. Both had been inseparable friends for as long as either could remember, also their families. Rohan, rather short, pudgy and shy, was the exact opposite of tall, lean and smart Joe. Yet friends they were, maybe opposite poles attract for humans also.

The forest lay serene and unmindful of their presence, yet they were the center of attraction of all forest activity. Crickets chirped all around them, the leaves whispered to each other stories long forgotten, birds of all feathers looked down upon them both from their high perches. A snort was heard, carried away from its owner by the gentle wind. the sacrosanct path, made by hundreds like themselves who had marched down the very same forest, years ago (or yesterday), lay in front of Rohan and Joe, winding and twisting around all obstacles thrown at it by the myriad forest trees, wrenching away from the very heart of the forest a clear path for all living beings to follow, if they so wished.

Rohan and Joe had been trekking for nearly two hours continuously through the unforgiving forest. Their very bones were tired . Yet each other’s company kept them going. But there always is a limit. They had set out as a bunch of ten people, seven were lagging behind them, one had rushed ahead.

“Let’s rest here for a while Joe” said Rohan as he slowed down to a complete halt.

“You are right” said Joe as he too stopped , “We can rest here till the rest catch up.”

The boys let their bags down and sat down upon the warm rocky ground.

“It sure is rough around here.” said Joe as he settled down, with his back against a gigantic tree.

They sat in silence for a while, listening to the forest noises. Rohan absent mindedly patted the grass near him. The steady rush of a river was heard nearby.

“Wow!” exclaimed Rohan as he suddenly pulled his hand out of the grass. Something had struck his hand and had slipped onto his finger.

“What is it?” Joe asked with a clumsy curiosity that only boys of fifteen can have.

“I found a ring” the excited, yet amused, voice of Rohan came sailing back.

“Show it” said Joe as he held out a hand. Rohan gave it to him.

“Hmm…” mused Joe as he examined the ring. It was a delicate thing, with very many intricate carvings. “Somebody must’ve lost it. We can give it back to the organizers when we get back.”

“You keep it till then.” Said Rohan as he closed his eyes and tried to concentrate on the world around him.

Joe put the ring into his breast pocket. He slightly patted the bulging mass, before completely settling down also. His eyelids grew heavy, heavier and he got lost in the world of no worries.

Joe woke up with a start. The sky had been deep blue when he last saw it, but now it was a shade of red that signaled night.  It was quite in the deep woods, a quietness that screamed into the listener’s ears. Even the chirping of crickets had stopped. Pin-drop, eerie silence. And Rohan was nowhere in sight.

“ROHAN” yelled Joe, shredding the silence, as he looked around for his friend. He possibly couldn’t have left, could he?

The trees seemed to be suffocating him, enclosing him in their long reaching limbs. Suddenly, there were noises and in a flurry of activity, a dozen hooded figures, black splotches in the growing darkness ,crept out of nowhere and stood in a semi- circle around Joe, none speaking, almost robot-like.

“Where is Rohan” yelled Joe at them. It seemed to make absolute sense that Rohan had been abducted by them. The suddenly converged on him and within moments he was completely and neatly tied up. And spontaneously, they stepped back into their semi-circle formation.

“ What are you DOING???” Joe yelled at them again

The hooded figure exactly opposite Joe stepped aside. A tall and lean Lady came strutting in. She wore heavy jewelry and even heavier make-up. There was such an air of haughtiness and arrogant power surrounding her proud face, that Joe immediately felt intimidated.

Putting a bony finger on Joe’s chin, she pushed up Joe’s face towards her. Looking at him straight in the eye from her coal black eyes, in a voice barely above a whisper, she hissed “Where?”

For a moment Joe was unable to speak. He then mustered courage to ask back, “Who are you?”

“Where is the Ring of Sielis?” she hissed again.

“The what?” asked Joe , completely flabbergasted.

“You don’t know.” The Lady straightened up to her full length. “The Ring of Sielis, forged in the great mountains of Sielis by the very best of dwarves, and bestowed with magic of centuries, the one ring that gives it owner power to control the world, the last of the items The Great One, Lord Darkenot requires for his revival.” She bent down once again, her nose nearly touching Joe’s. He felt an intense longing to slap that face.

“I don’t know what you are talking about” Joe whispered.

“The Ring of Sielis is with you” she screamed into his face, “Give it to me now!!! “

Joe suddenly remembered the ring Rohan had found. He could feel it in his pocket.

The lady suddenly pointed one finger across the gathering darkness of the forest at a nearby tree which Joe could’ve sworn wasn’t there a moment ago. Joe looked to where she was pointing. There tied to the tree, lay an exhausted looking Rohan. A mountain of muscles, looking extremely like Bane form THE DARK KNIGHT RISES movie stood near Rohan, with a serrated edge blade pointed at Rohan’s throat

“It is either the ring or your friend”

“It is in my pocket. Take it and leave him alone.”

“Ahhh…, so you know to obey.” She slid a bony hand into his pocket and took it out. She looked at it started cackling.

“My Precious” she said in a teeny scratchy voice, delicately handling the ring.

Someone suddenly started slapping him black and blue.

“Wake up you clumsy idiot” Rohan said as he slapped Joe back and forth. The noon was still in its full fury.

Joe jumped up from his slumber and hugged his friend.

“We are safe” he cried in joy.

“Whoa….Stop this. What are you doing?”Rohan asked in a voice saturated with surprise.

The boys quickly packed up started moving again. They walked for quite some time listening to the forest abuzz with noise.

“Where is the ring?” Rohan asked suddenly, remembering it.

“Oh that.”Joe quickly took it out of his pocket, “My mind says this will cause us a lot of trouble.” So saying he hurled the ring far into the forest. It landed on a river bank, rolled a short distance and fell into the river, never to be seen by humans again.

“What are you doing? First you hug me and cry. Now you throw a gold ring away. Have you gone mad or something Joe?” Rohan was half angry, half amused.

“Life is a dream Rohan, a dream.” replied Joe, trying to sound philosophical. “Further, it was neither mine nor yours.”

Rohan gave him a puzzled look before moving on.

The boys walked for some more time, taking in all the forest noises and scenery. Joe took out a camera and started flashing images. Rohan was too busy mulling over his best friend’s behavior that he stumbled three or four times.

Presently they came across someone stretched out on the grass, face first. It was their companion who had rushed ahead in front of everyone else. She seemed to be foraging in the long grass growing on either side of the path.

“Did you lose something, madam?” asked Rohan in a concerned voice.

She replied in a frantic voice , “ My gold Ring!”