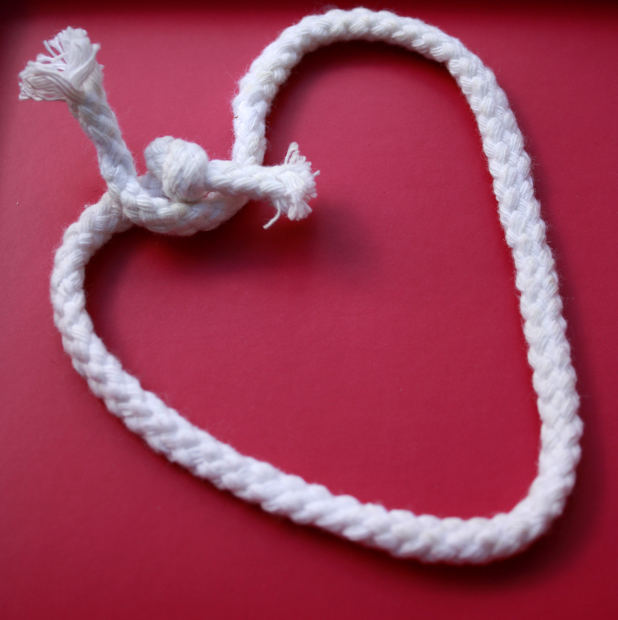 It was like nothing had happened in the last 20 minutes when he rushed inside the house and saw her happily rolling the dough. She still had the same smile when he had left moments ago, everything was too weird.

He went into the kitchen to comfort her, but what she said was even eerier than her smile.

“Kitchen is off limits. If you want more cookies, you will have to wait a little longer.”

He frowned and checked “Mary, are you okay? I know it’s hard…….”

“What are you talking about? I am perfectly fine. Go sit on the couch and let me make this last batch for Tom tomorrow.”

His heart sank. He was no psychiatrist, but he knew she was pretending to be cheerful and evading the break-up which had happened just now. So, he decided to do what she said and act normal in front of her, whereas, his mind was furiously finding a solution for this awkward situation.

As he sat on the couch, the guilt got stronger. He started to regret his decisions as he shouldn’t have forced Tom to break up with her on the day before the first year anniversary. And it was extremely rare to find both the girl and boy admired each other and became a couple, in the end, it was often the male doing everything to get a girl’s attention, but not her love. Mary and Tom were different, they both expressed their love for each other almost at the same time 364 days ago.

Chris was a witness of that merry moment.

“Can’t believe I am finally saying it today.” Tom took a deep breath to blow away the tension.

“Come on, I believe in you. I am sure she’ll like you a lot.” Chris encouraged. “Besides, I am here for you. Even if it does go wrong, we are still in the best amusement park in the world.”

“Oh yes. The craziest roller coaster ride for you and I.” his face lit up.

“But let’s hope you don’t get to do that with me.”

“Thanks for arranging all of these for me, man,”

“Anything for my best friend.” Chris cracked his fingers. “Now let’s do this thing right”

Suddenly, he heard a loud bang of a metal tray crashing onto the floor and ended his flashback.

“Are you okay in there?” He got up on his feet.

But there was no response. He ran into the kitchen, only to see her sitting on the floor with her knees pulled in and crying crazily. He got by her side and embraced her, like comforting a child who had broken her favourite doll. But her heart was broken into pieces, unlike her doll, it would take a long time to stitch them back together.

“Shhh. It’s not your fault. Your cookies are the best that I’ve ever had in the world.”

She pushed him away, shouting, “Lies. If mine are the best, why did he choose that artistic skank?” She charged out of the house leaving a loud bang on the door.

Chris, shocked by the sudden outburst of emotions, got up and chased after the impulsive Mary.

He chased her until she ran out of breath. She came to a halt and turned to him.

“Stop following me!” she gave him a furious stare. “Leave me alone.”

She took a few steps and looked back. He was standing still, locking his worried eyes on her. She ran further.

But Chris took a hunch and guessed where she was going, so he didn’t chase after her. After her shadow had disappeared under the glimpse of the bright moonlight, he took a deep breath and walked away.

Five minutes later, he arrived at the pier. He searched for dock number 5. As he expected, Mary was sobbing alone under the saddened moon. But he noticed something wrong with her because Tom’s jacket was placed on her shoulders. When he was about to step forward, he saw Tom running toward Mary and gave her a can of soda. Then they were hugging and kissing each other.

Chris couldn’t take it anymore. He stomped on the wooden planks and rolled up his sleeves.

“No! Don’t hit him.” Mary got in front of Tom and opened her arms.

“But you just broke up with him….”

Mary gave him a firm stare and everything went silent for a while.

Eventually, she continued. “Chirs, I know you don’t want me to get hurt. But people make mistakes.”

Chris leered at Tom as he clenched his teeth, Tom tried to avoid his stare.

“I know he was a jerk, but he finally chose Susan over me.” Mary held Tom’s arm.

“Mary Yates! Snap out of it. You are emotionally unstable. You were sobbing when Tom getting that soda for you..”

“That was a misunderstanding,” she beamed. “I was overjoyed when Tom chose that Susan over me, so tears rushed out.”

“Come on Mary, don’t be kidding with yourself.” Chris insisted. “You are not rational enough to make choices right now………”
“Shut up!” Mary yelled. “If you are not going to support me, get out of my sight now!”