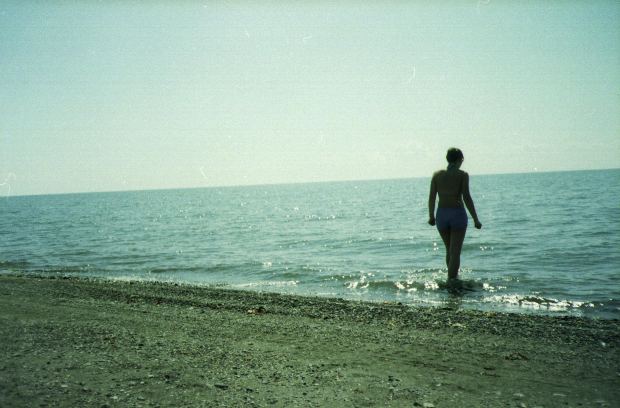 It was a beautiful day at the beach. They were happily crossing each others’ fingers and taking a stroll on the soft and tender sand with their sandals off. There was not a single cloud in the sky, everything was so clear and bright. Sunlight was not harsh nor dim, it was just right. He took a deep and relaxing breath. Then his whole body was filled with the fresh air mixed with a little sea scent.

Then she stopped and glanced at him. “Let’s dip our feet into the water.”

The water was cool. When the little ripples rushed onto their feet, it was like washing their faces in the morning, but the refreshing feel was on their legs instead. She let go of his hand and splashed water on his face. She laughed very hard when his nicely done hair was sabotaged by her sudden childish act. He laughed too, and splashed water at her.

After they ran out of energy, they lied their wet bodies onto the smooth sand. They both panted for a while. Then, at the same time, they turned their heads to each other and laughed blissfully.

She whispered “I had a great time. Thanks for bringing me here, Tom.”

He suddenly felt a painful on his right cheek.

He woke up on his bedroom floor and with a great pain on his right cheek.

He rubbed his hand on his new bruise and moaned “Ow! When am I ever going to move on?”

Chris still hadn’t forgotten the night she ripped his heart. After she screamed at him, telling him to go away if he would not support her decision of getting back together with the cheater Tom. There was a long pause where he stared at Tom like an eagle trying to kill its prey, and Tom was trying to avoid meeting his eyes.

“Something fishy is going on here.” he said to himself. “Tom didn’t even try to defend for Mary nor himself this whole time. All he did was stood there and held her hand.” So he made a decision that instant.

“Tom Turner! What are you hiding from her?” He burst.

“I am not hiding anything. I know I broke Mary’s heart, but I know the right thing to do. So I broke up with Susan and came here to comfort Mary.” Tom defended.

“You cannot lie to me. Once a cheater, always a cheater. Mary will believe you for now, but I will never believe you.”

“If you don’t trust me, then don’t. I don’t need your approval to get back together with her.”

“Mary, this guy is not worth trusting. If he really had loved you, he wouldn’t have cheated in the first place.”

“Stop it, Chris!” Mary burst into tears. “I love Tom. I don’t care if he cheated on me, as long as he chooses me in the end.” Tom drew his head closer to her face and wiped away her tears. He gave her a smooch on the forehead and said “Sorry babe, this will never happen again.” She gave the sweetest smile, but to the wrong person.

She eventually turned to Chris. “If you are still my friend, you will support me no matter what. But if you don’t support me, please leave.”

Chris had had enough of the drama in one night. He looked into her eyes, all he saw was the cry for help and desperate for care. He was mad at himself for not being persistent when she told him not to chase after her when she had that mental breakdown.

“You’ll regret it.” He gave her a hard stare.

“I said goodbye, Chris. Leave.” She was stubborn.

Then, he heard the cracking sound in his heart getting louder as he walked further away from her.

Chris brushed his teeth and washed his face, but he did not feel the refreshing splash in his dreams, he felt painful as the cold water hit the bruise on his right cheek. He went downstairs to cook his breakfast. However, misfortune never comes singly, he was out of eggs and bread. So he poured himself a bowl of cereal, nonetheless, he was out of milk. He went back to his room to get changed and have breakfast outside.

Chris had breakfast at the nearest restaurant. Then he went grocery shopping, to buy eggs, bread, milk for breakfast, and some alcohol to sterilize him whenever Mary’s face popped into his head. When he was going home from the supermarket, he passed by an alley where he heard a girl crying loudly like her body parts were being cut off by some lunatic. So he walked into the alley to check if everything was alright. But what he saw made him believe Tom’s words.

Susan was crying and screaming at the same time. She was holding a bottle of beer in one hand and sobbing crazily. “Cheaters never have good endings.” Chris said to himself, slightly relieved. Maybe he was using her misfortune to fill up the big hole in his heart, but he soon started to feel bad for her. Judging by her crappy looks and her horrid smell, she seemed like she didn’t shower for days as she was drowning in her despair.

“Who are you? Don’t come near.” Susan leaned onto the wall as she was trying to stand up straight. She poured the big bottle of beer into her mouth and screamed “I said don’t come near, pervert.”

Chris stopped moving. She fell to the ground, falling asleep soundly. He carried her onto his shoulders and walked home. He threw her into the bathroom tub and turned the knob for cold water. She woke up immediately.

“Where am I? Who are you? What are you gonna do to me?” she pulled her knees in.

“You are in my house. I am Chris. You are going to take a shower because you stink and you were drunk when I found you lying in the dark corner of the alley.” He answered calmly. Although she was still drunk, she was rational enough to make the decision to run away in a stranger’s house.

“Go away. Pervert.” she managed to climb out of the tub, but still couldn’t get on her feet. So she tried to crawl out of the bathroom, but she went the wrong way and hit her head on the cupboard. She fainted, again.

When she finally woke up, she was going through a severe headache and very smelly. She managed to read the note beside her, lying in the bathroom cupboard.

I am your host Chris Yeung. You were drunk and smelly when I met you at the alley, so I decided to help you out.

Enjoy your bath. And your clothes are on the other side of the sink.

Regards
Chris Yeung
The nicest host in the world

She laughed coldly as she took off her clothes and adjusted the heat of her shower. Tears began to drop as warm water ran over her body, washing away the dirt. But she wanted to eradicate more than dirt, she wanted to erase her memory.

She still remembered the heart-breaking call she received on the day he told her that he loved her. She remembered all of it: his harsh tone, his pathetic excuse, and that Mary whore he loved so much. On that day, she bought 2 big bottles of beer and started pouring down her throat as she wandered on the streets. The last thing she remembered was the feel of riding on someone’s back comfortably.

“Guess I owe the nicest host in the world a big thank you.” she sighed as she dried herself up with a soft towel. She dressed herself up and got out of the bathroom. The scent of a perfect breakfast rushed into her nose and signaled her stomach to groan. So she walked down to the kitchen and sat down.

“Smells good.” she praised. “You are really the nicest host in the world.”

He turned to her and gave her a heart-warming smile. “Glad you enjoyed your shower.” He turned and flipped the bacon. “Breakfast is coming right up.”

She lightly licked her lips as her mouth watered. “Can I get some warm water please?” she remembered her headache.

He pointed to her right, there already was a cup of water poured for her. She held it in her hands, the heat was just right. She took a sip of it, her whole body was filled with warmth. It seemed like her troubles had all vanished in that moment.