You are here: Home / Friends / Overwhelmed With Friendly Zombies … 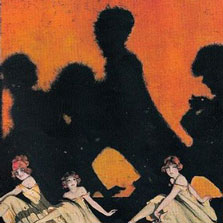 Late at night my friends and I were having a pajama party, eating chips and drinking cola. Narrating ghost stories to each other and playing on the Ouija board instilled horror in me. When suddenly my friend’s mum called, she was calling her back home urgently. We wrapped up everything and walked through the door.

All of us were walking down the street, gossiping about the latest news and trends around the world. I dropped my friends and was returning back home. Now without my friends I realized that how dark and starless the night was. There was a deafening silence around me. Some lamp posts were flickering and the leaves were rustling. In this gloomy night, there was nobody except me and the muteness around.

I was about to reach home when out of the blue I saw a bloody hand with long nails on my shoulder. I shouted in terror and started running in the opposite direction. To verify whether I was hallucinating or not, I looked back and on the spur of the moment I toppled over a stone and fell down with a thud. I now saw myself surrounded by pale, ghastly zombies. I screamed out loud as their pearly, milky skin gleamed under the moonlight. They had lank, straggly hair and chaotic, maniacal eyes that burned with madness. Their teeth were like a line of broken tombstones and their breath stank like the vomit from a drunken sailor.

I was spellbound and paralyzed with fear. I couldn’t move. As those zombies were approaching me, I could hear them cracking bones and clamping their fangs. My heart was thumping and  eyes were popping. I was trying to drag myself out of their trap but unfortunately couldn’t. Unexpectedly, there was a loud outcry and a blinding light. I saw Halloween decorations around and discovered that I was a victim of a prank planned by my friends. Not even in my wildest nightmares I could imagine myself in such situation. Tears rolled down my face as I breathed a sigh of relief. I got a tight hug from my mischievous and notorious friends.

Later I  found that the call was fake and the bloody hand was of rubber. I saw all my friends dressed as vampire, zombies, ghosts, witches and other paranormal figures. Gladly I enjoyed the Halloween party to the fullest and I will cherish this deadly Halloween forever.