You are here: Home / Friends / That felt like the longest flight ever! 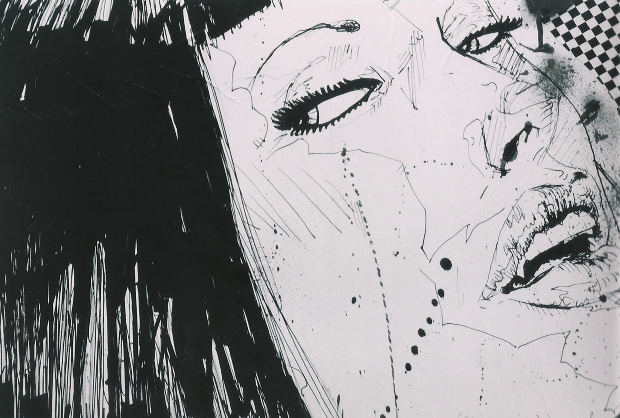 Friends Short Story – That felt like the longest flight ever!
Photo credit: carygrant from morguefile.com

He boarded the flight with a soft whistle on his lips, a twinkle in his eyes, a spring in his step. He felt happy after a long time. He was finally going home to meet his parents after a year of good but tiring work at the news channel. Imagining the comfort of his home, the loving embrace of his parents and the smell of jasmine flowers that would invade his nostrils the minute he got home, Armaan sank into his seat quickly. His was the window seat. So, he would be showered with the undivided attention of the white fluffy clouds floating on the light blue expanse of the sky. He settled down for the 2 hour 20 minute flight. Strange! He thought. So close yet so far. Aching to be with his family ever since his elder sister Richa delivered her first baby, Dad retired and Mom almost had a fall on the stairs 15 days ago, owing to her arthritis. He sighed and smiled at the same time, twirling the thin black wire of his headphones connected to his phone, sitting in his khaki coloured shorts pocket. He continued to tap his foot to the music in his ears.
Of course, they were all going to harass him about their favourite topic, “marriage”. He shrugged his shoulders at the thought. But he could handle that. He reassured himself with a confident grin. His girlfriend Mira was ready to wait for him at least for another 2 years.
So, he was in no hurry. Suddenly, he smelt the aroma of Ma’s kheer flying in through the air, mixed with the spicy smoke that danced around when Ma fried those crunchy, yummy pakoras…. He closed his eyes for a second and broke into a chuckle. Funny, he thought. The first thing that came to his mind when he thought of home was food. But Ma should not strain herself, with that shooting pain in her knees. She should rest, really. He will take her out for an exclusive lunch at her favourite restaurant this time. Every visit home, he promised her, but never kept his word.
“No, No, No, Mamma no…..” a cry broke through his thoughts. He opened his eyes to see a little girl, wearing a white frilly t-shirt, teamed with pink shorts, a stuffed cotton brown pup crushed beneath her arms.  Her chubby cheeks streaked with tears. Quickly, a not so young woman, with piercingly pretty eyes came by her side. Armaan looked up at the woman. She looked familiar. Was she one of Richa’s friends? He couldn’t recollect. Obviously though, she was the girl’s mother. “Get inside Mini” said the woman. The little girl wiped her cheeks with the pup’s tail and shook her head. “Window seat” she said and pointed to Armaan. Trying to look away would not help he decided. The mother smiled politely at him, not sure if he would oblige or not. Her curly hair was tied up in tight, firm, ponytail.
She stood there like a stone at the end of the three seats. Armaan stood up, holding his phone in his palm, cupped in his long, slender fingers. He unplugged the earphones from his ears.  The little girl who was called Mini shot a cold stare towards him. Not wanting to fall prey into ruining his mood, he walked out, making room for Mini. In less than a second, Mini was bouncing on the seat, tucking her two tiny feet under her hips, pressing her nose against the glass window as her eyes shone with delight. The mother mouthed a “thank you’’ to him. “No problem” he said as he waited for her to sit next to her daughter.  Armaan plugged the earphones back into his ears. He hated all the noise in the aircraft. He usually took late night flights to avoid this. But this time, he did not get tickets. And he would be home soon. Just 2 hours and 20 minutes he told himself as he tapped his fingers on the arms of his seat

“Aren’t you Richa’s brother Armaan?” a voice sprang up to him asked suddenly. Armaan smiled with recognition lighting up his eyes. He pulled the earphones off from his ears, “Yes. I thought I had seen you before. I was right.” he said. “How is Richa now? “She is good. Blessed with a baby girl too” he said glancing at Mini, who had busied herself in assigning shapes to the clouds. “I am sorry, but I don’t remember your name” Armaan’s voice trailed off in embarrassment. “I am Lieutenant Gargi Sharma, Indian Army” she introduced herself, pride echoing from her soft yet firm voice. She held out her hand. Armaan shook hands with her. As expected, a steady handshake from a strong woman. “I am on my way to join duty at my new posting”, she finished. A flash of admiration seeped into Armaan’s eyes. Women in uniform always made one feel proud, automatically generating respect for them. “Can you give me Richa’s number please?” she asked, cracking into Armaan’s thoughts. “Oh Yes!” he said as they both quickly exchanged numbers. “She will be over the moon to meet you” he said, in a sparkling voice. She nodded briskly. “Me too!”

For a moment, Armaan’s thoughts wheeled back to his childhood days when Gargi would come to meet his sister Richa. Armaan’s family always thought Gargi was shy and quiet. Richa was the only friend she had. Thanks to Richa’s outgoing personality. “It takes courage to let go of the familiar and embrace the new.” Who would ever think someone such an introvert and frightened all the time would join the armed forces? “Truth is indeed stranger than fiction.”
Flashing back to the present, Armaan thought she looked visibly exhausted at the moment. She was breathing heavily. Armaan looked at her face, wondering if she was crying. But it seemed more like she was sniffling. It would be rude to stare at her he decided and looked at the other passengers settling in. Colourful handbags, mid-size black, brown, blue and red cabin baggage bags, soft but endless chatter in Hindi, Marathi and English flowed in and out of his ears. The flight was ready to take off. As they fastened their seat belts, Mini was letting out a shrill scream, it sounded like a mix of excitement and fear. Her mother tried to silence her, but in vain. It’s her first flight, Gargi was saying, more to herself. Armaan let out a joyful laugh. Gargi joined in. Her dimples dug deep into her cheeks. “She has such a magical smile” thought Armaan.

The first 20 minutes after the flight took off were good. Armaan shut his eyes wishing for some silence. Non- stop chatter and half eaten nursery rhymes playing on her lips, broken crayons, torn wrappers of which spread out on her lap, Mini sat munching on a packet of biscuits that her mother had forced her to eat.  Mini fell asleep after the turbulence stopped. Gargi straightened the arms of her seat and let Mini lie down on her lap. Smoothening her child’s silky black hair with both her hands, she looked more relaxed than before. She asked the flight attendant for a cup of coffee. When the coffee arrived she became frantic as she looked for her purse to pay for it. She struggled to pick up her handbag that she had kept below her seat between her feet. All the shaking drew Armaan out of his reverie. He offered to hold the coffee cup as she released the handbag and paid for the coffee. “Thank You” she said with cheer in her voice. “You are welcome” he said aloud. As Gargi tried to zip up her unsettled handbag, a photograph fell out, reaching the tip of Armaan’s grey sneakers. As he bowed down, below the seat reaching out for the picture, his eyes curiously questioning, whom this man was.  Gargi’s voice reached his ears, “That’s my husband’s photo” she replied dryly. He died a year back in a freak accident. I have been lying to Mini about him,
all this while. Have to wait for her to grow up a little, before she can face the truth.”

Armaan did not know how to react. Shock, grief, sympathy flooded him all at once. He wanted to ask Gargi what happened, how did it happen? Did she need something? She turned away instantly indicating that she did not probably want to discuss it. Restless and unsure of what to say to her, they maintained a stinging silence. Armaan fidgetted in his seat, just waiting for the flight to land and get home.
Only 30 minutes left for the flight to land. Armaan took a quick power nap after his brief exchange with Gargi. As he straightened himself awake, he turned to his side to see her fast asleep, her head drooping on her neck, just an inch away from leaning on his broad shoulders. He noticed how she had pursed Mini’s palms into hers. But Mini’s eyes were wide open though she continued to lie on her mother’s lap.  An announcement was made about the flight landing in 30 minutes. It shook Gargi awake from her sleep. She rubbed her eyes and looked around. “Mini do you want something?” She asked. Mini did not answer. “I think you will have to sit up sweetheart, the flight is going to land soon”. “And we can meet daddy right?” chimed Mini. Gargi’s eyes drew in her tears like a reflex. She hugged her daughter tightly. But said nothing.

The flight landed and so did Armaan’s thoughts that were racing like horses. He stood up allowing her to move past him. Gargi held Mini’s frail hands within hers as she joined the exodus of people waiting to leave the aircraft. She turned back, her eyes widening and lips curving into a tight smile.

“Take care” he said, gently patting Gargi on the shoulder. “And come home. Richa would love to see you” he said warmly. She nodded quickly. “Thank you for the window seat” she said quietly. Mini turned around and waved to Armaan. He flashed a bright smile at the little girl and waved back. He felt queasy in the stomach. “This is probably the longest flight that I have ever had” he thought to himself and pulled out his cabin baggage.