You are here: Home / School and College / A Dream – Short Story College Experience

[Disclaimer: A Dream – This short story is work of fiction and resembles no bearing with dead or alive] 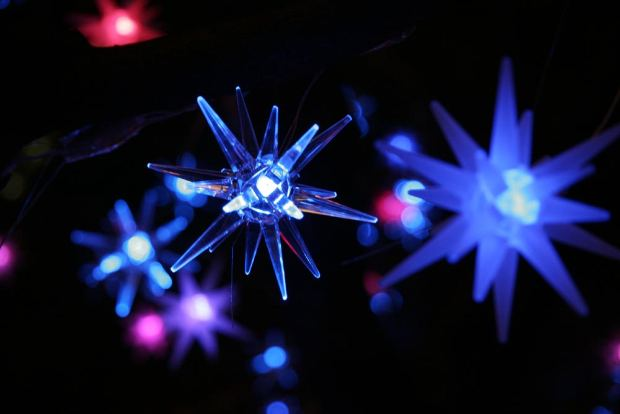 A Dream – Short story of a war hero with moral lesson
Photo credit: dantada from morguefile.com

Ajay was sitting quietly in his last annual function of middle school; The Prize Ceremony was about to start and he was confident this time that he would get a prize. He didn’t really know why he desperately wanted a prize — to hold the precious small cup, to get the applause from the audiences, or to understand the feeling of others who get the prizes.

In previous years he tried very hard and participated in all the activities — academics, literature, sports and what not — to stand on this big stage to receive prize amidst thundering applause from the audiences. Unfortunately he could never make to any of 1st, 2nd or 3rd positions in any events. At last, in final year he tried the toughest but safest bet — Target “The Student with Most Attendance”. He had to only not to miss any day in school to receive the precious cup in this category. To do so, he had to come every single day when the school was opened: be it shivering winter when people don’t want to even come out of quilt or be it hot summer when burning roof of their classroom was not less than live oven. He came to class even when he fell sick and his body revolted to provide any support to him.

The coveted prize “The Student with Most Attendance” was about to be announced. He was restless with anxiety and expectation though he was quite sure to win it. But destiny did not support him. His effort and dream both got shattered. It was not his name. He checked the records later to find himself absence for two days due to leave he applied for her mother sickness. No matter what, he already lost the final chance to stand on this big stage to receive the prize and accomplish his dream.

He tried hard to forget his failure but deep in his heart the dream was still alive without getting even slightly faded. All the hard work he did to reach to that big stage paid off, in a way, when after eight years of long wait he became officer in army. His commitment to get prize or medal was enormous. He was one of the brightest officers to let nation proud of. During Kargil war, while fighting for his country, he lost one of his limbs. He was decorated with many accolades but always felt something missing. He was retired after the victory and returned to his same small town after a whole decade. (He never applied a day leave in these ten years of army service). Nonetheless, stories of his bravery reached to the town much earlier to him.

One day he was invited by the principal of his old middle school. When he reached his Alma mater, time rolled back eighteen years and he found himself standing in same function hall as he once desperately waited for announcement for “The Student with Most Attendance”. School was feeling proud to have him as chief guest on its annual day. Principal requested him to come on “The Stage” to give away prizes in various categories.

As he was holding every cup from every category, one by one, to give away it to winner students amidst loud deafening applause from huge gathering that included even his old principal and other teaching staffs, his tears could not control but came out to be evident of this glorious moment — today the much awaited dream was accomplished on the very same stage.