You are here: Home / School and College / February,Rain and The Auditions… 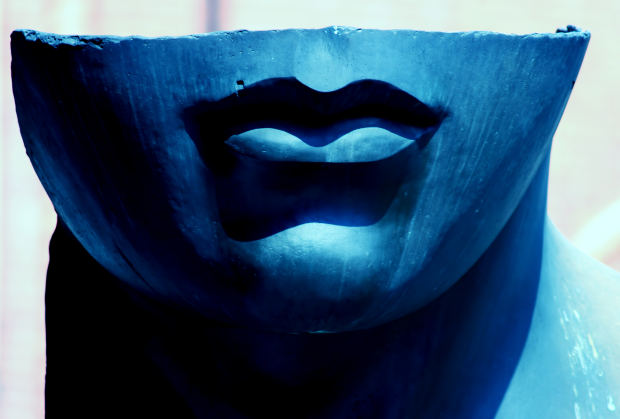 White full shirt, with a pair of blue jeans, brown punk hair, stud in left ear, and glares shining brightly and reflecting back what is to be seen by him, was that guy, roaming continuously around the balcony of his college. It was the time of year, when one would expect a lot of heat and dirt and sweat on another’s body to be on display. As per regular schedule, the guy came and attended his regular lectures with slight amount of anxiety hovering in his mind. That feeling of anxiety, which was the outcome of the continuous hard work he did, for the results, which may crash his soul. The guy, always called as the DANCER of his college was in an unusual state of mind, where he was conflicting with his long term achievement of being a dancer and his newly introduced outburst of anchoring.

He was all known for what he did last year on the stage with the proper movements on the particular rhythm i.e. dance. He was now thinking beyond his imagination to do this newly eroded feeling of his own i.e. anchoring. He wanted to prove the world that he has the potential to do what he thinks he can, and what he actually can. No matter whatever the situation occurs, he would strive against them to make his mark among the odds. But the destiny had something other in den for him.

He talked to people regarding his voice, he questioned them about the stuff he knew he can’t, but he actually can, which he don’t know he can. And the reply would be same as always “you rock”. These words would actually ignite his young mind in order to take the next essential step to become an anchor!

With his heart pumping rapidly and beyond the allowable limits, he stepped inside his teacher’s cabin and profoundly asked, “Am I selected?” and as he had already made up his mind for the reasonable reply he would get, his teacher said, “try hard tomorrow”. Asserting these words was really a difficult task for his teacher also, as the teacher was aware of the dilemma he was facing regarding his feelings!

Pain and agony and a slight amount of hate were being developed in his heart for the selectors, who commented “He is just good at dance”. The whole point of his own to prove him was now in vain.

The annual function of gathering was racing towards the current date and he was still not sure what he has to do. The guy who performed last year was now incapable of performing the unwanted. He knew that he was not meant to be in anchoring but he wanted to do this because of the fact that his voice was not acceptable to the people. He just wanted an opportunity to get close to the audience and connect the dots.

He was sure for one thing; that whatever he will perform this time in the annual function would be the thing except dance, for what he already had his share of accolades. Perforations were being introduced to his thoughts constantly by the people around him, but the fact he wanted to survive was making him stand against all of them.

As the time was leaping its boundaries, the conquest was getting more and more intense for him, which he hardly was going to survive. But somewhere in his mind, he knew he can beat them up all players and leaving them starving on the ground. The lack of time, plenty of perforations in his thoughts, and the wise little comments by his friends and acquaintances were making the decision for him more problematic.

Time for the college was now over and he was getting back to his home for the better judgement of his performance. White full shirt, with a pair of blue jeans, brown punk hair, stud in left ear, and glares shining brightly and reflecting back what is to be seen by him, was now that guy, who had been betrayed by his capabilities. He anyway had to give his last share of auditions on tomorrow to let the people know about his other qualities.

February was the month, and the dirt and heat was making his anxious mind go wild with all the anxiety shaking vigorously along the area covered by his obnoxious mind. And suddenly he felt few drops of some liquid with molecular concentration of H2O, dwindling just below his eyelashes. He knew he wasn’t crying, but to make that thought more precise, he splashed those drops from his eyelashes and again started with his driving stuff. Again the same thing happened and he now was worried about the fact that the liquid was water and was emerging out of his eyes endlessly.

He was totally engrossed in his own world, neglecting the fact that he was driving a vehicle with the existence of other body parts too.  An avalanche was energising in front of his sturdy eyes, and still he was unable to grasp that. A huge swirl of dirt and dust traversed him and some particles got stuck in his eyes making him inefficient for viewing to the normal focal length of his eye. He stopped roadside trying to figure out what was happening and that was when he saw his surrounding full of dirt and dust, leaves from the trees scratching upon the road and the people trying to get themselves safe from the storm. And when he totally figured it out, that was the moment when it started drizzling. The first rain of the season, the season during which, scarcity of water is to be estimated, but the happenings were total opposite of the universal fact.

He was as usual confused about the timing of rain, but still he was in his own agony of not being selected for the anchoring job for the college’s annual function. He started with his vehicle, contradicting the fact that it’s not safe to drive when it’s raining. The temperature of his body was getting lower due to the rain water rolling over his blood veins externally over the protective layer of his skin and still he was not sensing the same. The drops of water were trying to thrash his mind out of the current status of pain and bitterness. And in a way, god was showering his precious water over him to let him know that he’s not alone, he has somebody on his side to make him feel heavenly.

That white shirt was now covered with layer of dust and water and those glares were off his eyes, and the total content of his clothes was now full of water. Cold water flowing down his forehead, twitching his eyelashes, discharging upon the small opening of his mouth and then moving across the neck to the inner portions of his chest was making him shiver. In a way, the rain water was refreshing his whole body with new integrities. That moment made him realise the fact that, what happens, if he is known as a dancer, it is good to change one’s opinion about others only if the previous opinion is not true to the full extent. In his case, the opinions are true, so if he wants to change others’ opinions regarding him, then he has to quit the first job at first place and then think of the other.

Now he was sure for one thing, whatever may be the results after tomorrow’s auditions; he will leave his job of dancing and will try to get a new identity in his own way without letting others know that he had quit his first job. This transformation was the outcome of the feeling which he suppressed during that time when, the rain water was flowing through his body.

This newly produced boy was now trying to hope a better amount of development than the previously anxious boy.  He was now availed with the fact that whatever he has transformed into was the right choice and for the benefit of his own. And this is how the lost smile returned to his face with new heights of charm rendering upon.