You are here: Home / Friends / Beauty 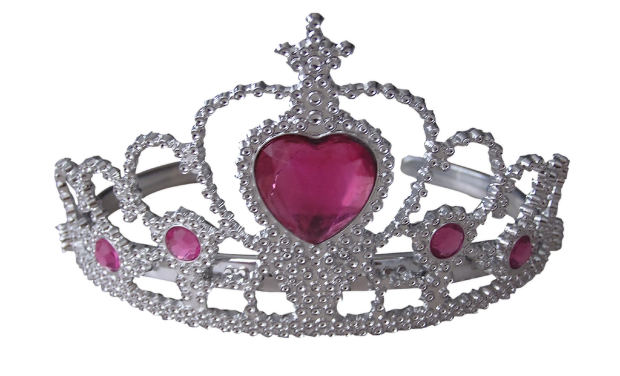 I stood there, staring at my lifesaver who has risked her life to save me and there she was, lying on the hospital bed with bandages everywhere. Then I remembered the flashback of our life. She was the new girl in our school, Anna. Everyone called her weird for being quiet but she had great beauty. She had the prettiest face in our school and she had very nice manners but she was hated by everyone. Even I hated her. I was jealous of her as I was the most popular girl in the school and I didn’t want her to be liked by everyone because of her beauty so I spread rumors about her so everyone would hate her but, she never looked at me with anger although she knew that I was main cause of her being hated.

I was very proud of my beauty and I felt that I was the most beautiful girl in the school. I had two other popular friends. I bullied Anna mentally most of the time and I never realized that I was that rude. She would cry bitterly every time my friends and I would talk about her mother. Over time, she was being liked by some people in our school. One day, I saw that there was a poster given out for our prom night. I wanted to become the Prom Queen this time. When the Prom Princesses were announced, Anna was one of them. My heart was burning with jealousy when I heard her name as I had the fear that she might be chosen for Prom Queen.

I was busy giving everyone free cupcakes for me to be chosen as the Prom Queen. Anna was being liked by more and more people because of her good attitude. I was really angry with her.

I saw Anna buying a dress for her Prom from the same boutique I was buying mine. Lastly, we chose the same dress but she was looking stunning in that dress with her beautiful long brown hair. I compared myself to her and saw that she was way more beautiful than I was. When she was going back home, I followed her and went into her house and tore her dress in front of her. Her was very small and I didn’t see any of her family members in her house. I was beautiful eyes filling up with tears but I didn’t feel sorry for her.

It was the day before Prom night when I was walking on the street while listening to a song. The volume was very high that I did not realize a car was behind me and was honking to warn me that it was in a very fast speed. Suddenly, Anna pushed me out of the way to save me but she got hit by the car. She was bleeding badly so I shouted for help. I felt as if a bullet went through my heart when I saw her bleeding. She was taken to the hospital as soon as I found some help. Now, there she is, blood is being pumped into her body and I pray to god that she heals fast. tears are rolling down from my eyes and there’s nothing I can do except for praying. I never knew that the person I hated so much would risk her life to save me…

I waited impatiently to hear news about her and I couldn’t sleep. I saw the doctor coming out and asked about Anna. He said that she would be fine by today. I was over the moon to hear the news. I went into her ward and apologized to her. I found out that her parents died in an accident and I invited her to stay with me in my house. She hesitated at first but I managed to make her agree. I told my parents about her and they allowed Anna to stay with me. Since then, I found out that, beauty doesn’t lie only on your face, your attitude matters a lot. I gave her my prom dress and quited from the prom contest. She became the Prom Queen and we became Best Friends Forever.