“Sometimes, life brings you to such cross roads

that you feel it’s better to smile

Than to explain to the world 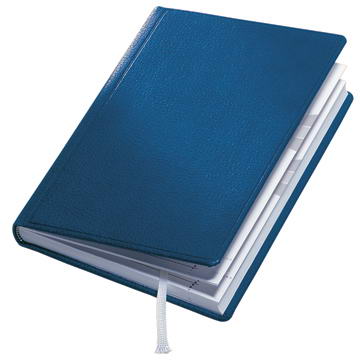 It’s 11 AM and I’m propped up on the hospital bed waiting for my breakfast to arrive while the catheter (the thing they put on your hand so that they can give you IV’s and drips without poking you a dozen times) is making it increasingly difficult for me to type into the laptop.

HOW did I happen to be in this situation?? Well… It’s a pretty long and strange story but that’s what I’m going to explain now…

Yesterday was Wednesday and I was looking forward to my third day in college having already bunked day two. I left home at around 8 and met up with Dave (my best friend in college) halfway through. If not for Dave, I would have definitely gotten bugged to death while travelling alone to college every single day. We kept up a constant chatter. What with me being the most talkative girl in school, college and elsewhere and he was making fun of my “utility bag” (Bcoz my college bag had everything from lip balm, post its, glue to money, tablets and of course my cutie bro’s photo) Well, they were essential for me and I had no intention of letting them go.

“So, Ri.. What plans for today?? Your treat huh?” asked Dave

He called me Ri which was short for Ria. I mean how lazy was he to shorten my already tiny name?? I was the popular Ria at college so it didn’t matter. Today was an important day and before I tell you why, let me make you familiar with our group of 4 super smart guys Adrian, Joe, Dave, Rey (pronounced Ray with a tinge of h) and 5 super amazing girls Stacy, Dot, Maggi, Hilary and the great Ria… (Please do not ask me how we landed with some of the pet names cause then I’ll have to tell another longggg story)

So, today we were going to celebrate Stacy’s birthday as it was on 21st April and we had vacation and we couldn’t get on with it but she thought that they were going to surprise me today as my birthday was on 16th April and was not done too. But we both didn’t know one thing which came as a shocker to both but I aint spilling the beans now.

Coming back to the real world I answered Dave. ”Ya dude, Just hope it works”. I grinned.

Finally, our bus came to a halt and we both got down and I got my phone out to call my super sweet, caring, loving and amazing, boyfriend Rey. Ria and Rey made the perfect couple. It was total bliss being with him… Oh! sorry for bugging you guys but you know I just can’t stop when it comes to Rey. He picked the call in an instant and a huge smile spread across my face. I won’t be telling you the conversation that issued but we found Joe and Rey dutifully waiting for us near the gate. I had to stop smiling because Joe was staring at me in a weird manner and I guess he probably thought I had lost it and also because my cheeks had started to hurt.

I gave Rey a hug and we continued inside. We had to order the cake for Stacy’s party but he said he wanted to go with Hilary because they had a fight apparently which he wanted to sort out. I felt sad at first because I was really looking forward to spending some quality time with him but I let it go because I can’t literally hijack him from his other friends, can I?? And we all were going to bunk the first class anyways so I didn’t mind..

While they both went to get the cake, Maggi and I went to find Stacy but after around 20 minutes of searching for her we gave up and went to get Adrian from class. He refused to miss his class so we just came away and Adrian was right behind us after a few moments.

“You could have come when we called right?”, Maggi Asked.

“Sorry guys, I didn’t know whose class it was.”. He winked. “And where’s Stacy?”

“Oh, We didn’t find her so we guys are going to meet up with Rey and Hilary as they’ve gone to get the cake for the party.” I confirmed.

We all were just about to enter the college grounds when my phone started its chorus of “Fall for you”. A smile always came over my face on listening to that tone. I flicked out my phone and saw “Rey Calling” flashing on my screen.

We spotted Hillary and Rey and moved towards them. After discussing the plans for the party we continued with stories of our vacation. And for the first time I was not the person who was hogging the entire conversation and it was all thanks to a weirdo device which I’d call the “Neck cam” even though it is in no way a camera. Thank God for that.

Well.. The thing is I sort of have this weirdo and strange cancer which you get due to some genetic mutation in the genes. It’s rare as only 1 in 50,000 people get it and it does weird things to your body. I wouldn’t want to go into the details though. So the Amazing doc’s have inserted a metallic cube into my throat which keeps track of my heart rate and brain activity and stuff. And thanks to that I couldn’t talk for 2 whole days. I mean, can you believe that the most talkative girl had to shut her mouth for 2 complete days? You’ll have no idea how horribly irritating it could be. It’s all pretty fine now but I still have to follow a strict diet and there’s this huge list of things that my body is intolerable to.

I know an aunt of mine who was lactose intolerant by birth and she would get convulsions every time she had even 1 sip of milk. But my sis and I made her drink a whole glass of milk once while performing a magic show. Well, she didn’t actually have to drink it so it didn’t matter. I wish I had that because then finally my mom and granny wouldn’t be forcing me to drink milk every single day. I don’t really have a grudge against milk but sometimes I’m just not in the mood for it. But you see, fate is always against me. Because my body is perfectly tolerable to milk but I’m not supposed to eat junk food at all and I’m also NOT supposed to eat NON VEG….

What sort of torture is this?? The most talkative girl who wanted non-veg 3 times a day was made to keep quiet and chuck non-veg for some 5 months due to a stupid, silly cancer.. I really hate it and am definitely going to have my revenge when I’m cured (which is a distant dream). Coming back to my neck cam, I had an option of getting a different external version which was cheaper but it would’ve been weird when my friends questioned me about it so I went for the throat thingy even though it was a few lakhs costlier.

“I don’t like that guy you know”, blurted out Rey pulling me back to reality.

I just burst out laughing because I understood what he meant. It wasn’t the first time he mentioned his dislike towards the tiny Shaman charm dangling from my mobile phone. He always said he never liked that tiny guy but I didn’t know the reason. It was a pretty cute charm presented to me by Fifa (FYI the pet name did not mean she liked football) on my birthday. And I did like it as it was meant to make your dreams come true and all I ever dreamt about was Rey. So I went ahead and explained it to all and they too joined in the laughter.

All of us finally got up and were going towards class when Joe and Dave came to the ground with a few other guys and it was enough to make both Adrian and Rey bunk the next class too in the hopes of playing cricket.

“I know..” chorused both Maggi and Hilary.

We entered the college gate when we encountered Dot and Stacy so after greeting one another we all went towards our respective class rooms. The classes moved in a blur. It was just the repetition of what we all had already mastered in our tuits so we just kept on taking random notes waiting to hear the bell ring. Finally, the shrill ring of the bell resounded throughout the college and all of us began to leave.

Our whole group met up in the auditorium and we were going to go to the closest mc d for the celebration when Dave said he couldn’t make it as his mother was ill so we dropped him till the bus stand without arguing. Meanwhile, I was missing Rey (like always) as he had gone to get the cake and stuff till we got to the place. We were just about to enter mc d when Rey and Adrian got down from an auto right in front of us. Wow, Amazing timing. We went upstairs and were trying to get ourselves a table and I was speculating about the shock on Stacy’s face when she’d see the cake.

It felt weird because all of us had this strange smile upon our faces as if we each had our own personal secret. I was getting irritated while we were waiting for the table as I personally didn’t want to go to mc d because I could practically not eat anything there and it would be weird not eating on my own birthday treat. We finally got a table and Rey was ultra sweet in reserving a seat for me next to him. We did small talk and finally got the cake out. Stacy was next to me and we both tried to open the cake together.

It finally came apart without much protest and when I finally saw it I was shocked out of my wits. Stacy and I just continued staring at the cake in utter disbelief with our mouths gaping and every one else was just staring at our shocked faces. This just couldn’t be happening. I mean I had planned the whole thing. It was apparently the same thought running through Stacy’s head too..