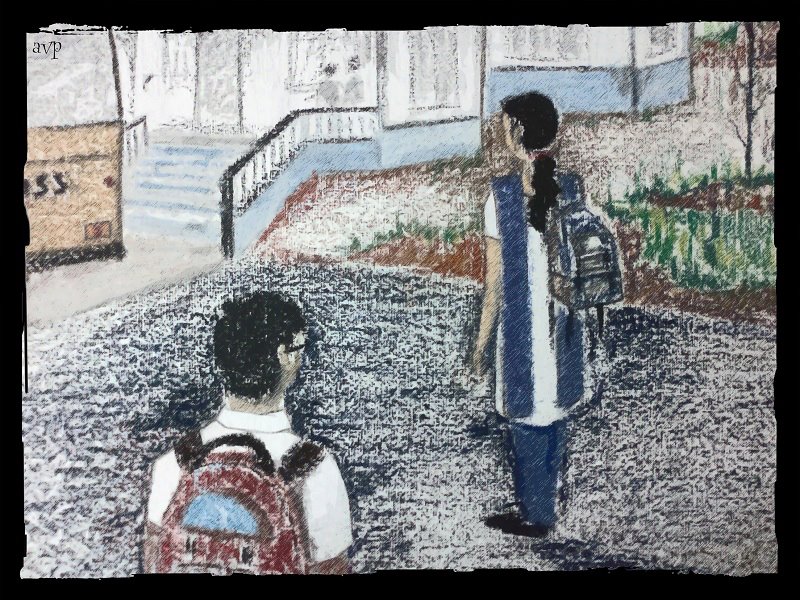 I was in midst of all crying babies of the school. It was my first day in school and really I was disappointed to see most of my going –to- be- classmates weeping and pleading their parents to not to leave them. I said a smiling bye to mamma who had come to leave me to my new school.

It was in pre kg. The new pink uniform and new school bags filled with neatly bound note books excited me. But after seeing ‘first day in school’ situation, I started waiting for the final bell even before the first hour went. Once all the parents left the class rooms, students in white and blue uniforms entered our class. It was the first time we saw each other. He was little taller than me for first standard and was holding hands with one of his girl classmate. Later I came to know his name as Vishnu Bhakta. We smiled for no reason in particular. The first grade kids danced to “come on Barbie, let’s go party”. I seemed to be the only child enjoying the dance. After the dance, when they moved out of the room, he turned back to see me who was staring at him…. that’s when the sparks were set in my heart and unknowingly I was eager to find the real fire…!

I had become the topic of discussion of the entire school. All the students were giving me a hiding stares, afraid to give a direct one. I knew they were gossiping about me. Without my mistake and without my control I was in that situation. I was afraid, insulted, being talked about… that guy had the guts. Tears swelled up, about to burst. It was the biggest humiliation of my 11 years life. I wanted to go and slap that boy on face for creating such a disgustingly popular concept of giving me a love letter not in hands but on the walls and doors of our class which became a seasonal hit even before I reached the school and realize what’s happening.

I was in class 4th grade then. The newly admitted guy to our class had this thing with me. He wanted to beat my scores in the beginning but then I don’t know what made him write an open love letter to me on school walls. I stood near the washroom uncertain what to feel. I was afraid of sudden attention and constant looks from others.

It was the break time and students were given 15 minutes of break to attend their personal needs. But that day they seemed more interested in knowing my story than the needs of their own body. The moment the bell rang I had run away from the classroom without wanting to answer anyone’s curious questions and more over I didn’t want to see that boy who literally ruined my life at 4th standard.

I saw the school leader and my senior friend from 10th standard walking towards me.

“What did teachers say Jackeline?” I asked.

“It’s nothing. They just called his parents. And there might be some kind of formalities and they forget it. Don’t be overly worried OK? You primary section people make a big fuss of everything. Aren’t you?

Saying that she walked to washroom and I stood cursing Neetu for being absent on that day only. I dint feel like speaking to anyone else.

That evening, after a series of questions from all subject teachers and sky touching cry from the love letter guy, finally the time to go home came. I was relieved. Unlike other times I avoided going with my friends and chose to go alone peacefully.

There I saw Vishnu. Vishnu Bhakta. He was then the head of primary section and was in 3 grades ahead of me. He was standing in between the circle of students. By his gestures and movements, and the expression of the students standing silently, I understood that he was warning someone. He was tall, good looking and popular kid of the school. Many of my friends were fond of him also fans of him. I noticed him in mornings during the assemblies as he stands on the stage and give us commands. I had known the words like cute, sweet, handsome and beautiful. But it was that age where I dint know which one to use on him. He is perfectly cute and handsome from the very beginning.

He noticed me looking at them. All the other students turned too. I realized then that Vishnu was taking charge of the love letter boy by which name he had already become a famous kid of school. We exchanged a smile. May be that was the moment fate started writing its story for us….