You are here: Home / Friends / OUTLINE OF A LOST RELATION 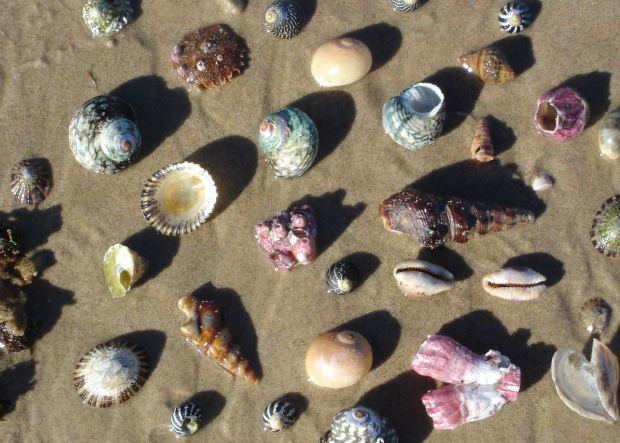 Regular classes for the first year students were started at the end of August. We, the seniors, had been ruling the department for more than five months. Even though most of my friends sought pleasure of getting acquaintance with the junior students especially with girls, I hesitated. I did not enjoy the talent of introducing myself to anyone, even in the middle of a crowd. I consider it as a great virtue of some to be open by self and help others who, without a pull from the outside, would never yield and try to open their own mind. So what I did here to abscond from my this inability to be open minded was to pretend to be an intellectual and engage in silly trivial matters which I deliberately tried to show as significant. This went on for more than a week before a young man in the juniors came to me and helped me come out of my self-created shell.

He was Abdul Basit, a cute handsome young man with a moustache and a light beard, piercing eyes, curled short hair and big ears. He introduced himself and in just no time we found ourselves creating a deep emotional relation which blossomed to an invisible, secure and consummate bond. He had a simple but a beautiful mind and an innocent character. To tell the truth, I was and am jealous of his decency. I always tried to be decent, just like the man that our culture desires us to be. But for Basit, there was no need to try and act. Simply he was decent by birth.

Before completing my studies, I got a job in one of the government departments. Even though my visits to the University and library decreased to once in every week, I believe I had succeeded in maintaining our good relations, which always had an emotional backing. I never considered Basit as a friend, but to this day I do not know what he was to me. Friends always discuss everything with each other and good friends do have no secrets. But I believe that we had secrets of our own, as far as I can conclude or at least I had, and we always discussed notions about virtue, positives and goodness without even a single expression or utterance of a crude word or a glance. It may be the result of the stark decency practised and promulgated by Basit towards those who found themselves lucky to have come under his spell.

As I said, I had tried my best to continue my visits to the department and university even one year after my studies. Basit, who stayed in the university hostel, would usually come to the library. I remember meeting him at the waiting shed in front of the library and we, as we always were, engaged in discussing so many things. He was always a different person, far from being common and I knew very well that I was not the person to advice Basit about anything who, I strongly believed, had a greater insight and world view than anyone in the whole department, including myself.

During the later months, I lost my contacts in the department and university as I was engaged in discharging my duties as a government servant. I feel indignant to say that I was busy. I regret my attitude those days which, if changed would certainly have benefited in keeping my contacts in the department, especially towards Basit. Keeping human relationships is always important or equal to in carrying out our humanly intentions and ‘so called’ family obligations like marriage, having a job or making money. The bond which was the core of our relationship was there as usual, intact, but the new energy which was to be injected to our minds, for its flourishing persistence, was lacking.

I usually went to my working place by train. Sometimes I would go by bus and on that fateful day, I chose bus. I started in the evening and found myself seated in the last raw of the night bus. It would be a long and depressing journey and it was nearly midnight, as I was preparing to have a nice sleep, my mobile rang. We find the mobile to be the most irritable device at times as I felt this time but as I attended the call, I was surprised to find Basit at the other end. I could not identify anything uncommon in his nature and his tone, as we spoke for more than 10 minutes. I promised him to call later and ended the conversation. It was a usual promise to end certain conversations whether we keep the promise or not. I regret now that I failed to keep that promise. Four days later, I had to hurry back my home as a result of to some emergency affairs and as I was sitting in the bus on my way to the railway station, one of my nearest friends in the university called and informed the ‘unusual’ death of Basit.

Everybody tell us not to look back at past. ‘Past is past, Keep your attention to future’ they always say. But I will certainly look back. I believe it my obligation to remember and shed tears for those who had, at the time, instilled me with the energy to live through contentment and distress. I owe this much of my life, whether it is success or failure, to the past, otherwise I would just be like an entrepreneur who always thrust for profit without paying much attention to humanly virtues, ultimately humanity.

I do not know whether anyone remember Basit nowadays even his own classmates. I positively hope they will. I do believe that the world has not changed but the human beings are. The birds have not changed neither the fish nor the animals. But the humans have changed. The power of most human relations have lost their charm, security and rigidness and this tendency will eventually contribute to the loss of that bond which keep our minds together, in joy and sorrow. But I will remember Basit, even if I am a dead man at this moment. I am sure that the bond which kept our minds together will certainly exist as long as the universe exists as an entity.

(Abdul Basit was a student of School of International Relations and Politics, Mahatma Gandhi University, Kottayam, Kerala who committed suicide on 4 December 2009).