You are here: Home / School and College / THE ILLUSION 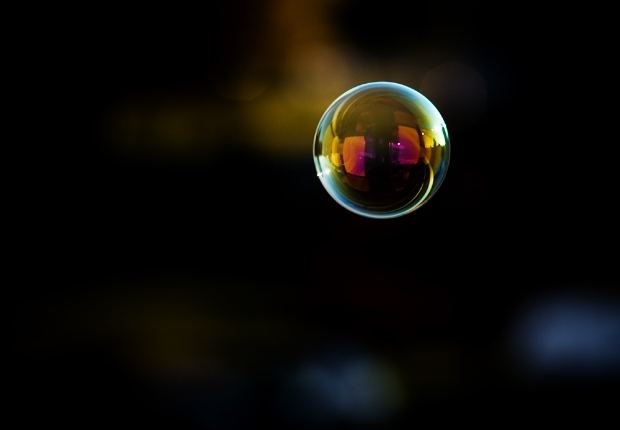 Short Story of a Magician – THE ILLUSION
Photo credit: carunan from morguefile.com

It was the last day of college before Dussera vacation, and everyone was in holiday mood and some even bunked the afternoon classes.

Mr.Namboothri doesn’t spare us even the last period. Normally everyone is very attentive in his class because of his method of teaching which lets everyone in the class to join in providing inputs and thoughts, but today the environment in the class is not that lively.

I was thinking about the trip which our friends had planned and what things should I take to the trip.

“… and if Mr.Vamshi  doesn’t stop thinking about his little trip and his luggage , he can answer to this question”, Mr.Namboothri  said in an unique tone adding a bit of sarcasm and pointing to question on board.

Everyone was watching me and I was shocked completely speechless. Then he laughed at me and said “this question would be your assignment to solve and now its your time to enjoy your vacation and collect your test papers form my table in staff room.” Then he started taking attendance, still not able to recover from the shock I didn’t even answer my roll call.

Then he said “this 74 year old person has been through your age once and has seen many passing through that age “, rubbing his big white beard .

My friends pulled me out as it was getting late and Mr.Namboothri  said “go my boy you got what you wanted” and I was thinking this must be a dream this cannot happen in reality.

My friend Raju has hit me on my head and said “ where are you lost?”

“So this isn’t a dream” and Raju  said  “what dream ? I told you to be ready by 9’o clock tomorrow or else we cannot catch the bus”, I just nodded in reply.

Next day with all our friends I went to kerala. House boats, beautiful greenery and lot of coconuts there was a lot to enjoy in this god’s own land.

As by its name the god’s own land had many temples and we visited one old temple and we started discussing about different temples in kerala and in our discussion we came across anantha padmanabhaswamy temple and its treasures.

Raju didn’t believe in that treasure thing and  Dinesh was trying to convince him about it , he was saying a lot of things about tantras and about tantrics locking the treasure, everyone laughed it off and told Dinesh that it was a good story and should publish it in yourstoryclub.com .

He tried to reason it out by saying many tantrics even live to this day, you can ask even Namboothri sir he also belongs to a tantric family of kerala.

Others did not care about it much but this thing made me remember what happened that day I got goosebumps.

After a lot of selfies  and lot of group photos being clicked we entered a village carnival where we saw a man who was telling future of people by face reading and Raju said “this man thinks as if he is THE INVINCIBLE ESHWAR.”

“who is he?” everyone looked at Raju .

Dinesh intervened and said “he is a famous Magician of our country and he too was from kerala, he gave many shows in India and other countries in other countries he is known by his stage name THE INVINCIBLE ILLUSIONIST”.

Everyone said “from now on we will call you Wikipedia Dinesh , from where do you get all this information?”

“from Wikipedia itself” Dinesh replied.

After dinner everyone was busy editing their new profile pictures, updating their posts and chatting with girls whom they didn’t even met once.

I started searching about THE INVINCIBLE ILLUSIONIST there were really less pages on web related to this and what I came to know is he is also called as Invincible Eshwar in India is a famous magician of 1960’s who was a master in almost all kinds of magic tricks such as PRODUCTION where magician brings something such as rabbit or pen out of nothing, TRANSFORMATION where a magician converts one thing to other like a watch into a pegion, TELEPORTATION where one thing is sent to some other place, ESCAPE where the magician escapes from different death traps in a chained position. And also he was an expert in MENTALIST magic where the magician says what a person is thinking or what is he writing or what does he has in his wallet etc.

Many magicians where expert in one or the other field of tricks but he was specialist in all hence he was called INVINCIBLE which became his stage name, but he suddenly stopped performing in 1968 and nobody has records or any information of where did he go. Some people even think that he vanished because of his failed tantric experiments.

So did Mr.Namboothri played  mentalist magic and teleportation tricks on me that day?

As I was going through different websites I came to know that the original name of this illusionist is Eshwar Vazkh Namboothri. So this man also is a namboothri , what is with these namboothri’s are they all freaks.

Days passed and the college reopened and one the first day there was felicitation organized for Namboothri sir as he was retiring from the professor job on his 75th birthday.

Raju was going all crazy as he was the head of felicitation arrangements and he gave me and Dinesh the responsibility to write his opening speech.

Dinesh started dictating the speech and I was writing

……… today we are here to felicitate such a great personality Mr. Eshwar Vazkh Namboothri.

“What?” I said in surprise.

I took my smart phone and searched once again about invincible illusionist and searched for images and I saw a young man in magician’s attire with with a unique smile on his face the same way Mr.Namboothri smiled that day.

I ran towards the staff room and there he was everyone was greeting him  and looking at me huffing and puffing he came to me and asked whether I needed anything.

“are you … are you the INVINCIBLE ILLUSIONIST ?” I asked gasping.

“These internet generation kids are really fast so you came to know about my little secret, so are you afraid of my tantric stuff?” questioned Mr.Namboothri.

“No, but why did you stop performing you where known to be best among all magicians and why didn’t you ever say to anyone that it was you”I questioned him.

He smiled again and started walking and said “ Do you know what is important in making an illusion ?” taking my pen out of my pocket and suddenly waved his hand to make it into a parker from a normal ball pen.

Looking at my surprised face he said “it’s the element of surprise, this thing entertains everybody when they get the unexpected. But out the magic show in the illusion created by god we don’t enjoy the unexpected things”

Looking at my confused face he said,

“I was at the brilliant phase then I even left my job to pursue full time job as magician and my shows where booked upto next 7 years in different countries and at that time in America I was performing a show.

There I met a one of my old friend. He was a good guy had no bad habits except for acting hastily in situations  and that costed his life.

He died in a road accident ,everyone said that it was written in his destiny I thought it was because of his foolish hastiness.

Then while I was practicing an escape trick from death trap I met with an accident and I drowned in water and I suffered some injuries.

In the hospital I saw one of my assistant’s behavior to be really different then to console him I said don’t worry I have super powers I know everything which is happening around.

It was meant to be a joke but he started crying and said he was sorry and it was not accident all the assistants wanted to kill me and frame it as an accident as they wanted my money. but “I knew you had super powers and you came out of trap please don’t punish me” he said.

I was shocked this unexpected outcome did not entertain me then I thought if life is like an illusion then why are we not  entertaining.

Then I visited a local magic show in disguise and due to the events which happened before I was not happy with that show but a person beside me was enjoying it.

Then I came to know that when a person enters the magic show he knows that something is going to happen so he is not afraid or sad about the unexpected surprise but enjoys it when it comes.

This gave me the knowledge that life is also like a magic show and god is the magician we expect some things to happen we plan but we don’t know what comes out of god’s wand that is destiny but we can still enjoy this life as a magic show if prepared with facts that we will face unexpected things and we will die some other day as a spectator is prepared for surprises and lives the every moment in the show .

So I left the life of magician and gave all my riches to my assistants and became the spectator of this greatest illusion created by GOD.”

I was moved by his story. Then he brought a gift box out of air and said “ This is my last lesson to you as your teacher son,  just try to live the moment out of all your ambitions , desires and all the accomplishments and sorrows which you may face in life. JUST LIVE THE MOMENT”and gave me the giftbox.

“ I will surely try to follow your lesson, but how did you do that?”I said pointing  the giftbox.

so please do comment about what you felt about it