You are here: Home / Funny and Hilarious / Driving Disaster 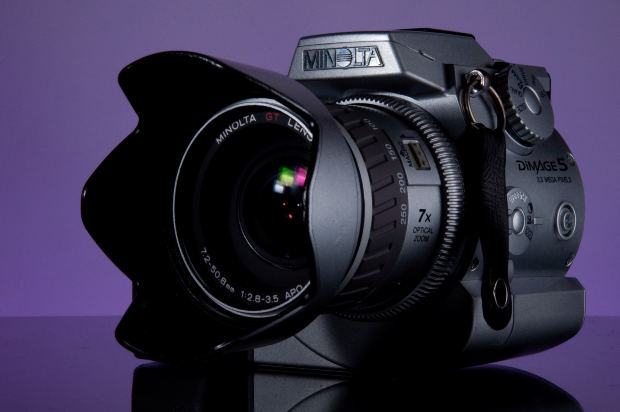 The sun blazed on, causing haze on that hot summer morning. It was Saturday and Destiny walked up to the Driving Centre. She wanted to enroll herself for driving lessons…yet again. Inside, slouched peacefully in the Lobby, was Stephen, the Boss. The officer that was usually in the Lobby was on leave and Stephen was forced to do the job instead.

In the car, just outside the Driving Centre, Ella sat, dozing away in the front passenger seat, waiting for Stephen to bring out her new pupil for the day. And in the News Studio next door, Abbey and Angel sat arguing about nail varnish, not noticing the frantic signals from the camera man who was trying to say that they were on Live television.

‘No, I think a sparkly blue would look better.’ said Angel looking passionately at her nails.

‘Pink for me.’ cried Abbey.

‘Huh, do you think you know more about fashion than me?’ fumed Angel.

‘Brooks!’ Abbey called to the camera man. ‘Do you think pink…your saying we’re Live? Oh man!’ Abbey screeched as Brooks took the opportunity to try and make them understand.

‘Ouch…why you.’ Angel pounced on Abbey, knocking her out of her chair onto the floor. Then she sat on top of Abbey with a triumphant look on her face. As Angel looked at Brooks to see if he was cheering her on, she realised once again that she was on Live telly.

So she went back to her chair and trying to look as dignified as possible, said ‘Today, we will be presenting a news report called Driving Disasters. In this episode, we shall record the studio next door and find out why it is so unpopular. Over to our Spy camera man – Alex.’

Alex, who was listening to all this via a walkie-talkie, switched on his camera as he heard his name, taking in Ella who was snoring like an elephant in distress. Then he crept out of the garage and over to the Centre itself, taking in every detail. Meanwhile, Destiny had reached the Driving Centre and was now entering through the spotless glass doors.

She walked over to Stephen who now had a newspaper placed over his face, as if to shield himself from the sun even though there wasn’t any. The ends lifted and came back down as he gently snored. ‘Stephen,’ called Destiny softly. No answer. She lowered her head so that it was level with his. ‘Stephen!’

Stephen awoke with a jump. He jerked his head forward, head-butting Destiny in the process. Then, rather dazed, he sat up and looked at Destiny. ‘Yes?’ he asked, trying to sound business-like but only succeeding in sounding like a drunkard. Then he saw who it was and scowled ‘You again.’

‘Yes, me again. I’d like to enroll for today and…’ began Destiny cheerily.

‘Sorry but today is fully booked.’ interrupted Stephen curtly. He didn’t like Destiny as she had enrolled seven times before and every time, had managed to damage the cars. And the driving tutors.

‘Doesn’t look like it.’ remarked Destiny, going through the records book.

‘That’s a spare. The actual ones with me.’ fibbed Stephen, snatching the book from her.

‘Oh, it doesn’t take any genius to know that I’m your only customer.’ replied Destiny coolly.

‘Well, it’s because of you that you are the only customer. You injure so many people and then we get the blame. We not you. It’s a real blessing that no one has been killed by you yet,’ began Stephen exasperated.

Both of them were so locked in battle that they didn’t notice Alex recording them through the glass. He was hidden in a bush and only the camera and a microphone could be seen.

‘And anyway,’ continued Stephen. ‘We’ve got a new car because you damaged the last one. And seeing your height, I don’t think your feet will reach the accelerator.’

‘Oh no. I’m going to have my way. If you don’t I shall complain to your mom.’ said Destiny slyly, knowing that probably the only person Stephen feared was his mother.

‘Oh alright. I’ll take you to the new car.’ And he led her out to where Ella sat snoring, completely unaware that they were being trailed by Alex with his camera and audio recorder.

Stephen knocked on the glass of the new Land Rover and Ella awoke with a jerk. She was about to ask, in a rather cross voice, what the matter was when she spotted Destiny. Immediately a look of utter terror crossed her face. Now Stephen was facing Ella. Destiny had her back to her. Stephen was giving her some last minute instructions.

Ella hysterically signalled Stephen that she did not want Destiny as her student. The last driving tutor had been her cousin and the last time she saw him, his head was wrapped in bandages, both his hands were fractured, his right leg was broken and he kept muttering ‘That Destiny…’

Stephen ignored her. He could do anything to get Destiny off his hands. When Ella saw that she had no hope, she joined her hands and looked up to the heavens, hoping for at least some protection. Destiny had now jumped in beside her and was putting on her seat-belt. Ella, rather grimly, put her’s on too.

Soon they were whizzing around town at a terrifying pace. After about half an hour Ella said, ‘I think you can go back now.’ Everything had gone so well, she didn’t want it to go all wrong now and in any case, surely they had driven halfway around the world now!

Destiny nodded, rather pleased with herself and careered around, leaving tyre marks on the road behind her. Right then, Alex was recording every last corner of the garage, where the Land Rover had been parked, reporting each movement to the studio. In there, Abbey and Angel were reporting it to a million viewers worldwide you were anxious to know the reason behind the failure of the Driving Centre. Little did they know that it was not the equipment, but Destiny that was to blame.

Abbey was just showing a Live clip of what Alex was recording when suddenly the screen went black. Abbey stared in surprise. Angel gaped. Brooks freaked out. A million viewers worldwide groaned. It wasn’t right to leave them in suspense.

For what had actually happened was: Stephen was waiting at the shutter of the open garage, waiting for Destiny to arrive (he didn’t have much hope that she would though). He suddenly spotted an approaching fire and as he craned his neck to see what it was (it was actually Destiny racing for the garage at break neck speed) he hadn’t noticed Alex creep into the garage into the far corner, turning over junk and reporting to the studio in a low voice.

Back in the car, Destiny of course, had her spirits soaring because she hadn’t hit anything. So she drove back at top speed leaving a trail of fire and making Ella wish that her parents had never met. And instead of slowing down when she reached the garage, she stepped on the gas.

And suddenly the car hit something and there was a scream, ‘Ahhh.’ And that was that. The end of the camera, the audio recorder and most probably…Alex.

‘Ooops.’ said Destiny while Ella sighed and shook her head.

Then Stephen called out, ‘Well, on the good side of it, your foot reached the accelerator…’