You are here: Home / Funny and Hilarious / A loop of excuses 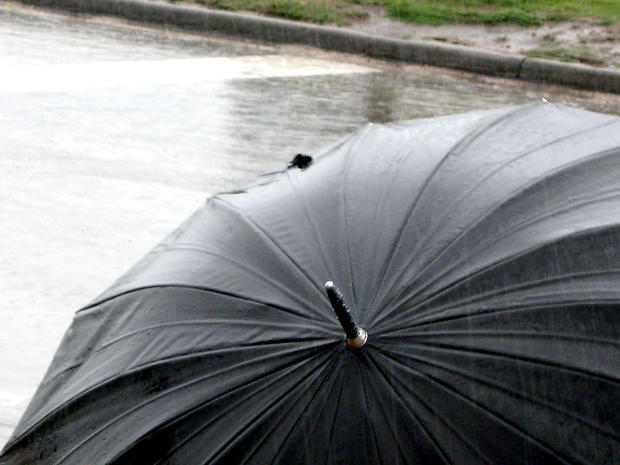 Once there was a big cricket match about to take place between two ever competing groups – India and Pakistan. Swapnil generally is not so casual and tries to give 100% attendance in his office. But he has not taken leaves for now quite sometime, so this is a good opportunity and reason also for him to manage one day of leave. Boss has already mentioned that some important stuffs need to be done on that day. So Swapnil knew pretty well that on asking for the leave he wont be allowed to take so.

Swapnil is very serious and dedicated to his work. So when he saw that he wont be having that much of stuff to do on that day, he thought of giving that day off. So he decided to secretly give a bunk on that day without informing anyone from beforehand. He dint think much about how to manage once he again joins back thinking that he could then somehow make up some excuses. Also since he has not taken leaves before like this, as there had been a lot of important big matches like this before also, noone could also even guess that he was absent because of the match.

The day came and Swapnil was off from the office. The big match started. The match was getting played in South Africa. The whole time was completely filled up with excitement and lots of thrill, tension and enjoyment. The two teams each gave a good competitive fight and at last to Swapnil’s expectation India won the match. Swapnil was very happy going to sleep at night, as after a long time he took a leave which was really useful. Also the whole day was raining which also gave some idea to Swapnil about what excuse he would be giving when he joins back and he is being asked for his absence.

The next day, when Swapnil went to office, one of his colleagues, just looked at him and said, “Hey what happened yesterday? Why dint you come? I know that you dont remain absent for a simple cause. There might have been some need for you. Anyway still boss declared yesterday only, to be one important day. You could have taken the leave on some other day. But again may be you had had planned much earlier. Anyway, boss was looking for you. Please go and meet him.”

Swapnil got a bit scared and went slowly towards the boss’s room. He knocked on the door and an soft, clear reply came, “Come in.”

Swapnil went inside. The boss was writing something. He symboled Swapnil to have a seat in front of him. Swapnil slowly approached and took a seat on one of the chairs. He dint have to wait much as the boss completed his writing and closing the files and keeping the pen in the pen stand looked up at Swapnil and asked, “So, what’s up? Why did you remain absent yesterday, when I specifically called it an important day?”

Swapnil was very serious and dedicated with his work. He tried to have 100% attendance. And because of all these he was really liked by his boss. He knew that in actual boss also knows that he has not taken leave for so many days so could take but the only thing is he took leave on an important day. Boss also knew he dint have in particular much stuff to do yesterday, and also since Swapnil’s usual nature is not like this, he must have had some urgency. Moreover he has a good relation with boss, so the boss would anyway forgive him. So he thought that he should tell him a serious lie, rather make the situation a bit lighter.

Swapnil said, “Sir because it was raining.”

Boss: “Raining? Raining means? could you not have come with an umbrella?”

Swapnil: “Sir my umbrella was broken.”

Boss: “Broken? So do you have only one umbrella?”

Boss: ” So then could you not have repaired it?”

Swapnil, “Sir in that case let me tell you that my father only has a umbrella repairing shop – the only shop in our locality. But the shop was closed.”

Swapnil, “Sir because my father dint open the shop.”

Boss: “Ah, that I understand but why dint he open the shop” asked a bit softly understanding that this is getting a bit personal, but could not help it without a solid reason.

Swapnil: “Sir because my father was at home, working, very busy.”

Boss: “Yes so then? he was working on the umbrella right?”

Swapnil: “Not on, with. He was working with the umbrella.”

Boss: “What do you mean with the umbrella? You said you have only one umbrella and that is broken. So how could he work with the broken umbrella?”

Swapnil: “His good umbrella I meant.”

Boss: “My goodness!!! So could you not have asked for the umbrella from him or to repair your one?”

Swapnil: “No Sir, he was in the terrace planting trees.”

Boss: “Ok. So what? You mean to say you couldn’t call and ask him?”

Swapnil: “No Sir, I did indeed call him.”

Boss, “What nonsence!! What do you mean he couldnt hear. Is he deaf?”

Swapnil: “No I was calling from downstairs.”

Boss, “O my God, this is getting nowhere now!! So I want to say, why dint you go to the terrace and call him?”

Swapnil: “Sir, I already told you, it was raining. So how could I go to the terrace when I don’t have another good umbrella?”