You are here: Home / Funny and Hilarious / Wrecked Routine 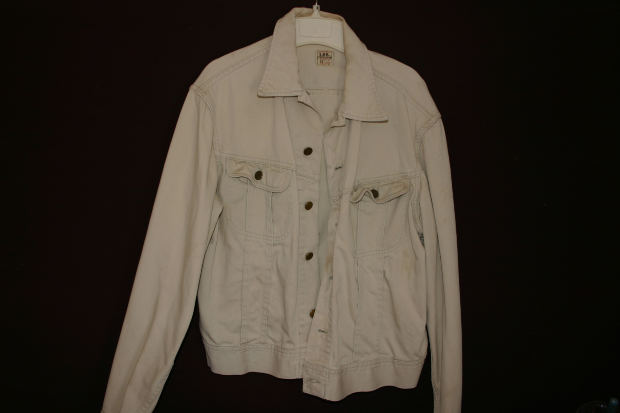 Andrew Solomon’s life was probably the most remarkably predictable one for any human being. All you need to do to predict his life is to observe him for just one week and it is the exact same rituals over and over again 24 X 7.

Andrew Solomon was what you could call the average man. Medium height, slightly fat and with a partially bald head of graying hair, the only thing that set him apart was that he was still a bachelor at 55. He had an uninteresting job at a local bank, typing out receipt after receipt after receipt for each and every transaction. He rarely took days off. Every working day morning he would wake up at six to the uproar of his alarm. He would pour himself a cup of coffee and down it in one gulp. After refreshing himself he would settle down onto the dining table at exactly 7:15 and open The Morning Post, surfing through all the main heading. He would fold that up at 7:20 and put it safely in his briefcase above all other documents before going ahead to eat the leftovers of the previous night. After that he would dress himself up in his plaid shirt and tie and put on his old worn grey overcoat, a birthday gift of a close friend.

At seven forty five sharp he would leave his apartment, say a casual hello to his neighbour who would be watering the garden and catch the 7:55 bus to his bank and would arrive a minimum of fifteen minutes early. From a nearby shop he would buy a pack of cigarettes containing twelve. Immediately he will polish off three, put the rest in his coat pocket and take a gulp of water from within the bank before settling down to work at exactly nine. After continuous tapping away for three and a half hours (with an occasional gulp of water) he would take a break for an hour to eat his lunch at a nearby canteen and finish off five more cigarettes.

He would then settle down to read quite a bit of his newspaper. He would get back to work at 1:30 and continue for another three hours till four thirty. Packing his briefcase, he would go out saying “See you tomorrow fellas” to his young and inexperienced co-workers who worked till five or six in a rat race to come on the top. Andrew would then take the 4:45 bus back to his neighborhood.

Arriving at around six, he would sit in the park and watch the children play as he finished both his cigarettes and paper. Dumping both into a nearby dustbin at close to seven he would go to a local restaurant called ‘The Savory’. After hanging up his coat on the second peg, he would settle down on the table nearest to the window and order his dinner. Dinner was probably the only unpredictable thing he did. The menu he would choose depended entirely on his mood. He would always ask for more than what he wanted and pack up the rest for the next day morning. After dinner he would put his coat back on take a leisurely walk back through the gathering darkness.

Now that you know you know Andrew’s entire life schedule, I, as a silent and passive observer, record here an incident that not merely altered but completely demolished Andrew’s routine for one full day.

It was a clear Thursday morning. Andrew woke up with quite a start. The sun was well into the sky and the early morning chirping of birds was long gone, replaced by the heavy hum of passing traffic. Andrew picked up his rustic alarm. It was dead.

Loudly cursing, he threw away the sheets and quickly refreshed himself. His watch showed the time as well past eight. No time for breakfast. Andrew put on his overcoat. The Morning Post was missing. Just as Andrew rushed out of his house, he saw it in his neighbor’s dog’s mouth.

8:35. No time to wait for buses. For the first time in his life he quickly hired a taxi which seemed like hawks looking for preys. Hiring taxi meant no more cigarettes for the rest of the month or overtime work or cutting down his diet. He wasn’t ready for any.

He arrived at the bank ten minutes late. The first(and hopefully the last) time in his life. After a hasty apology to the manager, he quickly got down to work. It was near one that he got off only to find that he had money left in the wallet only for one meal, either lunch or dinner. For the first time his life he went hungry for lunch. On an empty stomach, devoid of practically everything since morning, Andrew slogged away in his cubicle till four. Suddenly the manager, known to play with people’s minds, passed by and gave Andrew a disapproving look. Andrew decided to rectify his late coming. His routine was anyway broken. Andrew worked till well past five thirty, on an empty stomach, another first in his life. On his way out he said, to empty chairs, “See you tomorrow fellas”.

Andrew left his office like a war-ravaged man. Climbing aboard the first bus he saw to his home Andrew sat down and waited. Halfway through, the tyre burst and Andrew lost half an hour staring at the hard pavement outside. By the time he got back, it was nearly seven thirty. Andrew walked into The Savory, a defeated man. The second peg was occupied and he hung his overcoat on the only available one, the eighth, for the first time in his life. All tables near the windows were occupied by various assortments of people and Andrew got one bang in the centre, under every diner’s scrutiny. He ordered a bright and colorful meal to brighten his dull spirits. After eating his fill, which did help to lift his spirits, Andrew paid the bill, took his coat and walked out. It was past nine. He began to walk back home, for the first time in his life at so late an hour.

Out of no reason, his mind brought back news from The Morning Post about abduction, mugging and murder of old people returning from their jobs late at night. Out of an instinct, he turned around and saw one man only in the entire lane. And he was staring defiantly at Andrew.

Quickly turning away, Andrew tried quickening his pace. An intermediate look behind showed him that the man too had quickened and was following Andrew with steely determination. His brain frantically started bringing forth every piece of news it could get hold of. At some point, when Andrew turned back, the man was barely a few feet away.

Andrew broke into a fully fledged run, as fast his old legs would carry him. Behind him, he heard the heavy footsteps of the man. It wasn’t easy for a person, who last remembered running when he was twelve to escape his father’s wrath, to run again at fifty-five. The other man soon overtook Andrew and stood in front of him. Andrew came to a squeaky halt.

With a sudden surge of courage, Andrew looked into his would-be-assaulters eyes, clenching his fists at the same time. Adrenaline, stored up for nearly fifty years, flowed freely throughout his body.

Pointing to Andrew’s chest with a grim determination, the man said, in a surprisingly soft but firm voice, “You are wearing my coat.”

“What do you want?”Andrew asked the man in a steely voice.

Andrew arrived home after eleven. Needless to say it was day of too many firsts.