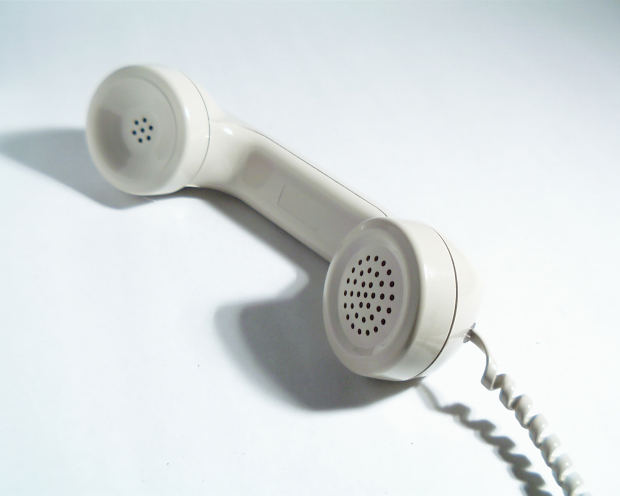 Ball in the air, every eyes present in the field chasing the distance it inclined to cover. More than half of the players were certain that ball will cross the frivolously designed boundary rope but Sandeep hoped otherwise. Unfortunately like always, Sandeep was again too optimistic in his expectations. As ball crossed the boundary line, it was apparent that the result was not in favour of Sandeep’s team.

Before that with long run up Sandeep dared enough to experiment with the last delivery of the match. It was loopy slow full toss inviting eventful smash from batsman. Scenario was 5 runs needed in last ball and Sudeep stroked the monstrous six in the limited over casual cricket match, regularly played by certain teenagers for amusement in small uneven ground of Tagore Nagar.

Sudeep raised his bat with cushy smile and plodded slowly towards Bunti Bhaiya to celebrate their win. Like passionate lovers they hugged each other to elevate the quantum of their excitement.

Moreover, Sandeep with loose shoulder, glaring towards his shoes soon reached near stumps and kicked it with frustration to wipe out its presence from that rough pitch.

“Why my efforts do not emanate fruitful results?” Sandeep shared his view with Bunti Bhaiya in toned voice.

“Don’t worry Sandeep; you are too sensitive to accept realities. It was just a game. Result changes with time and space,” yelled Bunti Bhaiya endeavouring to ease out the matter. His normal suggestions are also injected with rational content, in fact very difficult to ignore. Automatically, it needed to be followed in order to avoid twitchy tensions.

Thereafter, with cricketing gadgets in hand Sandeep and Sudeep with Bunti Bhaiya scudded back to their home. Others also went to their respective destination through different way.

Sudeep was calm and quite but Sandeep consistently investigated Bunti Bhaiya’s thought on various other subjects. Sudeep like a mute spectator kept on walking without giving due importance to our chirpy talks.

“Totally, his actions are governed by his mood,” Sandeep pondered while observing Sudeep.

Soon they reached home. After tasting some delectable edibles, Sandeep rang up Bunti Bhaiya to update his plans for the coming night.

“Hello, I am tensed for tomorrow. What kind of question may come? Done with Mathematics and Analytical Reasoning part, still more attention needed to be given for General Knowledge,” shared Sandeep with rapid speed in his elocution.

“Hmmmm – don’t worry, everything will be alright,” said Bunti Bhaiya.

“What should I do? Can I leave general knowledge part? No, I’m just revising what we studied till yesterday. That’s it,” Sandeep answered his own question herein. Hard to stop him when he expresses his feelings, Bunti Bhaiya knew it better than anybody. So, he also learnt to improvise situations perfectly in accordance with Sandeep’s nature.

“Ohhh! By the way, what’s Radha Ji doing?” said Bunti Bhaiya. With stunned ennui, Sandeep understood that Bunti Bhaiya, through his wit compelling him to transform his mood. Very easy for Sandeep to do it, as people like him can’t pressurize their mind too much.

History behind Radha Ji is enthralling. During 10+2 days, when Sandeep’s joint family sleep at night time, he used to jump from his balcony and find his way surreptitiously till he climb up to Bunti Bhaiya’s house. Central thrust of such thief kind of escapism is to learn mathematics in order to get passing marks in final examination. Bunti Bhaiya than was a mining engineer and very intelligent gentleman, being seven years elder to Sandeep.

Unfortunately, studies take time to initiate when best friends sit together. Although, Bunti Bhaiya was Sandeep’s teacher here but they shared incredible flawless tuning between them. That commencing mathematics in his cool room with computer at desk was quite a task. As a result, Sandeep always surge his intellectual capacity to elicit idea which may add some new enthralling flavour in their memories.

His eye catches landline telephone. Wow, his instinctive response, eyes got widened taking shape of button. Sandeep went near the phone and managed to play with its frizzy wires. Later, he felicitated his uneasiness by carefully rotating each of its tangible part.

“Wrong Number,” said Sandeep. It was enough for Bunti Bhaiya to divulge the frantic idea of his younger friend.

“Worth trying, but which number,” shuffled Bunti Bhaiya. Given Indication was enough to reciprocate that permission being granted to Sandeep for beginning extreme mischief at mid-night.

“Hello, May I talk to Radha Ji?” astonishingly said by Sandeep.

“To whom you want to talk,” sweet girlish voice came from other end.

“I want to talk with Radha Ji but no matters can chat with you also. No worries at all.” Soberly Sandeep presented his point. Suddenly, contrite thought emerged in Sandeep’s mind and he disconnected line with fear.

Sandeep shared his experience with Bunti Bhaiya who was sitting beside him. They laughed madly and suddenly their phone ring interrupted their merriment. Both saw each other with disappointment.

Sandeep indicated Bunti Bhaiya to pick phone by twisting his eyes. Otherwise in down stairs Bunti Bhaiya’s parent may know about the incident. With brevity, Bunti Bhaiya picked up the phone.

“Fuc*ing idiots, tell me your residence. Don’t have manners. I’m a big bureaucrat of the city. I know how to deal with bloody rapscallion like you,” firm male voice accosted from other end of unknown person.

Sandeep disconnected the phone with scary heart. First time, he felt short of words, difficult for him to face Bunti Bhaiya.

Again ring buzzed our psyche. Instantaneously, Bunti Bhaiya picked up the phone and regretted for the said mistake in a bold manner.

“Mistake happens by human being only, chill out uncle, next time it will not happen. I’m giving you surety. Try to understand and discard the matter herein only,” said Bunti Bhaiya humbly.

“Ha ha ha, don’t take tension buddy,” said Bunti Bhaiya. He has this canny behaviour to evaluate Sandeep’s feeling at times of silence. It amazes Sandeep and soar his love for this unmatchable friend. Some more call came but ignored by Bunti Bhaiya.

Sandeep slept subsequent to the event and returned back to his home in early morning. Passion for study elapsed and mood became awkward.

“Why the bloody tragedy occurs in my life?” said Sandeep to himself with sarcastic smile. Rotated his head towards sky and blinked one eye. Don’t know why but he confuse near by peoples with such kind of self-important activities.

Next day, they met each other. Bunti Bhaiya was quiet. So, Sandeep tried to outburst the tranquillity by saying Radha Ji. Thereafter, he laughed wildly.

Bunti Bhaiya was still calm, wiped glass of his specs with white handkerchief and told something which buried artificial happiness of Sandeep.

“Luckily, just saved from disaster,” said Bunti Bhaiya. He further explained that few people lodged complaint against him regarding event of last night to his father.

“My parents somehow tackled the situation, as those people had time to collect my address from telephone exchange and came to my home in order to search felon,” said Bunti Bhaiya.

“Bloody ras*als, don’t have any other work,” scanty observation of Sandeep presented with responsible husk.

Sandeep couldn’t digest the expression and sneered like motor pump, accelerating the sound of laugh slowly and convincingly. Later, he felt guilty about his carelessness but consoled himself through another distinct self-made belief.

“Incidents like this add flavours in life, without which memory lane remains incomplete,” shrieked Sandeep to himself.

Such pompous belief helps Sandeep to forgive himself consistently and move ahead with non-extinguishable positive spirits.