You are here: Home / Funny and Hilarious / The fugitive groom 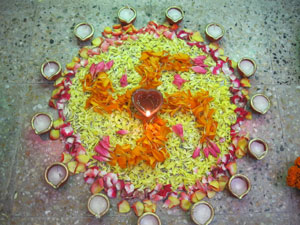 The clock struck six. Although Sushena feigned sleep, the aroma from kitchen was tantalizing.  Granny was probably making ‘ kotte kadubu’ –the malnad special. Oh dear! Sushena loved the thought of it. The morning sun pierced through the corner window also unfogging his pile of dreams from last night. Soon enough, the room was filled with the sweet fragrance of champa flowers from the backyard. The morning prayers at the adjacent shiva temple were on its heights. The rhetoric chants jolted sushena’s   sluggish nerves. “vishweswaraya…….trayambakaya…tripurantakaya…….trikagnikaalaya………….kaalagnirudraya……..neelakantaya…….mrityunjayaya….sarveshwaraya…..sadashivaraya…….shankaraya…..mahadevaya…….namaha…..” so it went.

He put on his glasses and thought about the big day ahead. Was he sure he wanted to do this? His senses detoured as he heard his sister downstairs. Sushena scampered to the hall while the chanting from the temple tailed him.

The family had gathered around. No, it was neither anyone’s birthday nor anniversary. They had come all the way to help sushena find his bride. Sushena was 27 now. How long could they wait? The boy had a satisfactory job at an advertising agency in Delhi. Though it was not good enough, his uncle’s  sister-in-law’s  neighbour’s grandson had come up with a few proposals which were to be moved. Everyone seemed so meticulous. Mother and granny were wrapped around the kitchen chores. His father and uncles were preparing the itinerary. Grandpa was busy shaping his moustache. The kids stormed around from everywhere. As far as Sushena was concerned, he did not have the slightest comprehension of what was planned for him. The only thing he cared for right now was  ‘the kadubu’, ‘the sweet rasam’,’ the shavige’ and’ chutney ‘ that would be served to him at the girls’ places. Of course, people came home on vacations to have good food. What was so wrong with it? sushena had no reason to feel shame.

The engine groaned when the whole family squeezed into the car. One little jerk and the car wobbled making tiny shrieks now and then.

Their first visit was to the Keshavs’. They were an old friend. So, it might prove a good alliance with them. The girl was a classical singer. Sushena’s mother was in tears when the girl sang exuberantly. But, sushena was highly disappointed because he was only served with coffee. The girl’s father expressed his disapproval upon the fact that sushena was not an engineer. Well, where was sushena’s fault in that? He couldn’t understand. Wouldn’t he have done engineering if he had got a seat? “Shameless people!” his mother grumbled.

Moving on, they next visited the shastris’. Unlike the keshavs, the shastris provided sushena with delicious food which pleased him a lot. Few moments later , the girl’s father expressed his deep condolences on his daughter rejecting sushena. His little beard was the culprit. The girl somehow had grown a sudden dislike to it. This freaked him a lot. So, what if he had a beard? If it was not for this cute little beard, priya would never have dated him. He felt a slight spasm in his heart on the thought of his ex.

The kashyaps welcomed sushena with great pomp. The next session went on mostly with sushena’s mother exalting him for his valour and good conduct. Sushena was now condemned to think about this. Who were they talking about? Was sushena really on good conduct? He had had sex without his parents’ consent.  Was it with priya? No…..It was kajal. …..No, it was both ………….Twice with each. What if his family came to know of it? God ……he would be busted. He was relieved when he was rejected again. This time because, he wore glasses. His parents eyed him with the look of disgust. But, hang on. Again, how could sushena be blamed for it? he never fancied wearing glasses. He would have had sharp eyes only if his ancestors had.

The evening sun had reddened the horizon and was now smiling maliciously at sushena  and seemed to badger him because of his failure in the new venture. For a moment sushena had an instinct to punch the sun on his red hot face. But the birds flying towards the west were well armed and would swoop in to protect and pamper their big blistering boy. Sushena was now treated as a weed outgrown which had to be repulsively thrown out. Poor sushena….well who had asked them to find him a bride? Why couldn’t they mind their own business? Was it his fault he was rejected 7 times in a single day? Some girls disliked his looks. Some were dissatisfied with his status of economy and qualification. Some were suspicious, some were surreptitious and the others were discourteous.

In order to end this ordeal righteously, sushena  was dragged to visit the Dixits’. Their house seemed to be more voluminous than sushena’s. The girl too seemed to be pleasant. Finally, he could feel a sense of cheer in the atmosphere. The girl’s father came out with the test results. What would he hear? an yes or a no? It might be an yes because the girl was still smiling at sushena . Or may be not. The girl’s mother seemed to indoctrinate her. Finally ……..an ‘YES’…….oh my god sushena’s mom almost jumped up from the seat. What a joyous moment for our sushena!!! Hang on.

There was something else. The girl’s father continued that his daughter was willing to marry sushena . But, as she was a busy woman working for 7 hours a day, it was sushena’s responsibility to take over the kitchen which meant the boy had to take up a vigorous training on cuisine for 3 months from his would be mother-in-law. Sushena’s head buzzed around. His mind and body swaggered .He felt a slight thud. He promptly got up, told he had to use the restroom and disappeared around a bend. He didn’t look back until he had reached the backyard and suddenly paced up his momentum and sprinted across the paddy fields, the town hall , the shopping complex and finally the railway station. He clambered onto the moving train and saved his dear life also affirming to himself that he would never ever come home for a vacation.