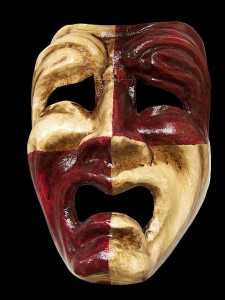 “Ah! Where would he have gone!?” they asked each other, aghast.

“Where could he be now!?” they seemed to have lost their nerve.

“Would that we too had wings to reach for him!” they wished.

Meanwhile, very far away from this place, he was trembling with fear. He had hid himself in the clumps of shrubs. Unclothed; so terrified that he would flit on the stirring of a leaf. Blood oozed out from his multiple wounds. Fright had engulfed him.

Alas! Life is nothing more than a tragedy! Mere pain, it is! Suffering is its process!

No doubt, the fear of death served a purpose to life. And that was the reason, perhaps, he adored God.

In fact, it was no issue, but this very ‘no issue’ quickly snowballed into such an issue that now all other issues became pointless save this issue.

It began like the ringing of a mighty bell that shook everyone there, when people suspected he was god. He cried, ‘I’m not god’. But no one believed him.

Poor fellow! He stepped out from his cottage just for the purchase of a little salt, but a peculiar thought sprang to his mind while walking towards the market. “May what I say, come to be!” he said to himself. There was none there to share his wish. But a mysterious unseen voice whispered in his ear, “Gentle man! Your wish has been approved, but not for your own person, I’m afraid”. He was stunned. He looked all around, but found no one from any side. “Who’s that!? Who spoke it!?” He gathered nothing and continued forward.

While putting his hand into his pocket to find payment for the grocer, he discovered it empty. He became nervous. He felt the ground slipping from under his feet. He perspired profusely. His pocket hadn’t been picked; he recollected that he actually had spent his pennies on cigarettes the preceding night. Poor memory, sometimes, renders a man disgraced. He began searching his pockets, just to excite the grocer and make him inquire what the matter was. And the grocer did so.

“What happened?” asked the grocer.

“God knows where I lost them!” He deflected the grocer’s question.

“Did you lose your money?” The grocer enquired.

“I’m at a loss to understand whether it vanished into thin air!?” He played craftily; because he knew well where the money was spent.

“Don’t worry, pay it next day”, the grocer consoled. A recent lecture of a local preacher came to his mind, in which the preacher had stressed to help the needy.

The grocer’s consolation gave him comfort, or else his heart was in his mouth. Although he was at ease now, still his evil instincts made him play crafty. This very instinct disgraced Satan and he was thrown out of heaven for it. “But Sir, what puzzles me is where the money has gone!” He was, of course, lying. He surely knew where the pennies had gone.

“Feel at ease now, as I tell you to pay me back tomorrow”, the grocer repeated his word. But this time it lacked warmth. He was now apprehensive that the man might lay his hands on more items for credit. ‘What a pity! I take pity on someone, and he creates a nuisance’, thought the grocer.

While leaving the grocer’s shop, he gave him a blessing: “let your rock salt turn to gold!”

The grocer thudded onto the road outside of his shop, as if someone kicked him forcefully. All his rock salt had turned to gold. Other shopkeepers and passersby ran towards him to help and asked, “What happened!?” The grocer pointed towards the man and faltered, “go…ddd. He is god!” He fainted.

“god!!!!!!!!!!!” the crowd there cried. Then all their wishes stirred at once inside them. “It will be foolish to let this opportunity slip!” everyone there thought.

A big crowd surrounded the man. One and all were impatient. Each person wanted to be heard first by him. “O god! Grant me audience first!” each person was visibly eager. The ring of people tightened; they jostled each other to get closer to the man. He was squeezed into the crowd. He found it difficult to breathe. He was drenched in sweat. “Thirst…. Thirst…!” His voice choked. He was asking for water. He began panting with raging thirst. But, no one listened in the noise. They were making a hell of a racket there. They were imploring and soliciting his blessings to gain their wishes. He wept. Tears rolled down from his cheeks. The beseeching intensified. They clung to him. People lost their sanity. In that madness people trampled each other. Husband walked over his wife and wife pounded her spouse. Siblings were out of their minds and stepped on each other. All souls acted desperately and everyone lost sight of their own wishes. Each body was blood-stained and their dresses tattered. Their bruised bodies and ragged dresses had brought visible similarity on their appearances; and now they were not recognizing even each other. They had lost their identity. During this struggle, a button off the man came to the hand of someone in the crowd, and he cried: “I got a gift from God!” As soon as other people heard it, the scrambling increased. In this mutual bid to grab something for themselves, the clothes of the man, pulled in all directions by solicitous people, were soon in shreds. Even his hair was pulled from the roots and they rendered him bald. His underwear too was pulled as a token of gift.

And in this tumultuous situation, when they behaved rashly, he escaped and ran for safety!