You are here: Home / Funny and Hilarious / Humorous Divorce in Benedict, NE 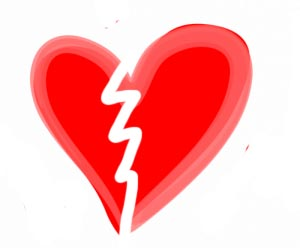 I was surprised when I found out that I got a divorce, never knew about it & didn’t even have to sign anything. I thought to add humor to the situation because it happened in such an ironic way. That pretty much ended my relationship to my sons & even though I breast fed my son for 13 months, taught him how to go poop on the toilet & took him to Dr. visits & Pre-K. (It didn’t matter). My x used his poor me self image & ability with his sadistic personality disorder or what you would call an emotion eater in the small town of Benedict York, NE. This is a tale to warn other parents to never trust the other parent who moves to small towns that there not familiar with because your likely to have your children ripped from your life. Here are the humorous steps that my x took to avoid taking financial responsibility.

* Move to a small racist (demographic must have 98% of white) town that has limited amount of legal representation. This will ensure that the parent who is not part of community has no opportunity to get fair divorce or able to even get a divorce attorney.

* If your lucky you can spread rumors around about your soon to be x that she has some issues mentally. That always works when in reality your just telling people about yourself. Join the local church & create a reputation that is fictional that will help ensure that you get full legal custody based on your newly created reputation. If everyone in the town believes your an angel everyone will believe it.

* Volunteer for a local organization like the fire station or sheriffs department. If you take time to volunteer you can make people believe your the most selfless person, even if you didn’t take the time to help your wife when she had her infant or toddler.

* Make sure that your finances are controlled by a trusted individual like your father. Someone who has been through 4 divorces & managed to murder two of his wives. Gosh I wonder how that happened.

* Start dating someone in the legal department in the small town to ensure that you get free legal advice. Because remember your the victim. Your soon to be x isn’t getting polyps removed from her intestine.

* If the mother has the children make sure that you give her no emotional or financial support. Don’t worry your dad will take care of that & of course she had a hard time with you, without you was a breeze until she got sick. To ensure that after a year she gives you the children while she recuperates don’t let her know you planned on never returning the kids, oh wait you did. Then cut her off of all contact so you can erase your children’s memories of their mother.

* Avoid any and all legal documents that should be served to you to ensure that you don’t have a divorce in a large city because you want the control.

* After this happens make sure that no contact between the mother & child is allowed. Claim that the mother abandoned her children, even if she was adopted & abandoned by her own mother, then left with a nut job who was kind enough to remind her that he skin color meant she was a slave.

* To ensure that the children only know your religious views because only you matter. Make sure the town your in does not have any laws that protect against child molesters or have childcare requirements. So you can leave your kids with anyone.

* If mother tries to find children through sheriff’s department; because you refused to contact her for 3 years & she finally calls the FBI, files a divorce. Contact her & let her know that she is already divorced. And because she abandoned the children in a city that she has never even been to let her know that she has to pay child support even after you refused to pay her over $3500.00

* Leave her children with a childhood abuser because what’s more important than cutting off all ties to the mother, ensuring that her children are abused just like she was then tell her what you did so she decides to take you out with a single. No no there are other ways to make someone feel pain for the rest of his life.

* Don’t provide the mother with the divorce because you can just tell her stories of how she wrote letters to all of his relatives, which she finds funny because he refused to allow her to see any of the letters. Then on top of that tell her you have photos of her sons, drawings & pictures, promise to mail them to her after she sends cards & toys to the boys. Then never let her see the children that she gave birth to because the baby sitter told him not to.

* Try to get the biological mother arrested because taking her children wasn’t enough, she might spend the next 12 years making your life a living hell & you don’t want that do you? No, so do whatever you can to cover your tracks, eventually she might catch up to your fabricated new life & destroy your reputation.

* I didn’t even live in the town where I got the divorce the tiny town of York, NE. No I live two states away. I got away with not paying for any of the debt from my marriage, got out of paying my x, 3500.00 in back child support but that doesn’t matter. I told her the only way she could see my children is if she came to the town where I don’t live & she can see them for an hour. Even though I live thousand of miles away & sold her car for $100.00 that was valued at $5000.00. It didn’t matter that she paid it off. Black people will always be slaves to the white that is what I told her. So there is nothing she can do because my daddy married a white wealthy woman who accidentally died so there is nothing you can do. God ordained me so I walk on Gold. You do know I was chosen!