You are here: Home / Love and Romance / The Final Good Bye 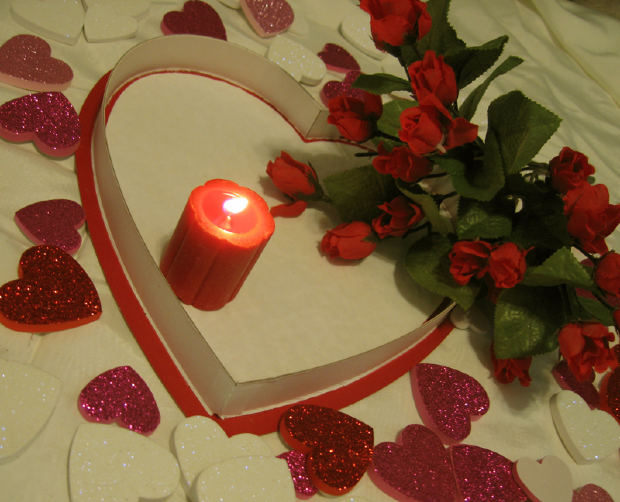 The floor thumped to the footsteps of the boy, and the girl was totally awestruck by just looking at his dance.

The girl, Riya liked to dance but, knew that she couldn’t dance like this boy. Nikhil was so engrossed in his dance, that he didn’t realize Riya was noticing him and his dance.

Once Nikhil finished his dance, there was a huge round of applause from the few spectators in the college auditorium. And, the audience response assured him that he had cleared the dance audition for entering the college fest.

Being part of the organizing committee of the college fest, Riya was also taking the auditions for the upcoming college fest, apart from the other four members of the organizing committee and three teachers of their college. Riya had given full points to Nikhil for his dance, and waited for the other members to complete their marking. The selection was to be done, on the basis of the results by all the judges present there. Once, all the participants had completed, Riya quickly glanced at the other judges sheets to check for Nikhil’s result. And was happy to realize, all the judges had given him good points.

The results were to be announced the next day.

Once the auditions were finished, Riya thought of meeting Nikhil.

She went towards the backstage, and couldn’t find him there and neither anywhere around. She thought that maybe some other time she would try to meet him and tell him that he is an excellent dancer.

The next day Riya spotted Nikhil, in the corridor .She rushed towards him and told him that he was an excellent dancer.

“Do you know Nikhil; you have been selected for performing in the upcoming fest. Remember I was one of the judges for the dance auditions.” Riya blushed telling him.

Riya wondered how come he knew her name.

“How come you know my name Nikhil?

“I have an idea, why don’t you dance with me in the party after the fest? ”

Riya couldn’t believe her ears. The most popular boy of the college was asking her to dance with him.

“Okay. I don’t believe that you are asking me to dance with you.”

“Sure Nikhil I would love to dance with you.” Riya blushed telling him.

They parted ways to attend their respective classes.

All the students were in a state of joy.

Riya was eagerly waiting for the party after the main event as she wanted to dance with Nikhil.

The whole event really well, and as expected Nikhil had won the dance competition.

After the event got over, the party began. Riya was waiting for Nikhil to take her to the dance after all she was shy in asking him about the dance. She looked around and could not find him anywhere. Her friends caught up with her and congratulated her for organizing such a wonderful event and took her to the party. She wanted to look around for him, and at the same time did not want to disappoint her friends.

Riya went to the party with her friends ,a little sad, a little distressed and a little confused only thinking that why he had not approached her for the dance he had sought her for. She really wanted to dance with him. Her best friend Megha saw the quizzical look on her face, and asked her whether everything was fine. Riya told her that she was completely fine, and was just a little stressed out from the preparation of the day. Riya went ahead with her friends to the dance floor. And, there in the distance, she saw him dancing.

Riya went ahead towards him and tapped him on the shoulder.

Nikhil turned around and looked towards her, tapping his feet.

“Nikhiiiillll, you had asked me to dance with you today. Remember?” Riya shouted at the top of her voice, in the loud, blaring sound of the music being played.

Nikhil held her hand and danced with her. Riya could not believe that she was dancing with Nikhil. Riya could not match the steps of Nikhil, but definitely got a compliment from him that she also danced well.

From that day on, both of them started spending lots of time together in college. They even talked to each other for hours and hours over phone. Whenever she came to know that he is practicing some dance steps, in the dance hall, she used to join him to practice and match up to his steps.

Riya was falling for him day by day. She had become the envy of many girls in the college. She knew that this was it and he was the love of her life. Her friends were making speculations about her relationship with him and all she used to say was that Nikhil was just a good friend, but in her heart she knew how she felt for him.

Six months had passed, and one fine day she confessed to her best friend Megha, about her love for Nikhil and even told her that she hadn’t told him as yet. Megha suggested her to go ahead and confess her feelings to Nikhil and assured her that he would understand her feelings for him.

That day Riya went looking for Nikhil, to finally tell him how she felt about him and how much she loved him.

Riya found him in the dance hall, dancing to a latest number.

She waited for him to complete his dance, and then tell him everything, but somewhere she was getting really impatient.

She was watching his dance and observed that his face looked tensed and his steps were at times not matching up to the beat. It seemed that there was something in his mind, and whatever it was she would soon find out.

As soon as Nikhil stopped dancing and grabbed a bottle of water to drink, Riya went up to him to talk.

“Nikhil I need to talk to you.”

“Can we talk later Riya; I am not in a mood to talk right now.”

“I wanted to tell you something, it’s a little important.”

Riya started thinking again whether to tell him or not.

“I..I love you Nikhil.” She blurted, and suddenly blushed when she realized she had confessed her feelings to him.

Nikhil thought for a moment and finally said.

“Riya, I appreciate your feelings for me, but you need to understand that you are only a good friend for me, like my other friends.”

Riya’s heart sank when she listened to this.

“And as far as love is concerned, I am in love with someone else.”

Riya didn’t say a word and looked at him.

“And who is that Nikhil?”

“Her name is Naina.”

“Why didn’t you tell me this earlier?”

Nikhil just shrugged and said nothing.

“I am going to New York, next week Riya.”

Nikhil thought for a while and finally said.

“I have to go to Naina. She is in New York and needs me.”

“Even I need you Nikhil, I really love you. And, we have spent so much time with each other.”

“Riya, why don’t you understand, I don’t feel any such thing for you. You are only a friend, and nothing more to me.”  Nikhil was really angry.

Riya didn’t know what to say or think.

“Naina is suffering from a life threatening disease and is fighting a battle between life and death, and I have to be with her.”

Riya was shocked on hearing this, and went away from there without saying anything to Nikhil.

Every night, Riya used to cry to herself, only thinking about him.

After this episode, Riya couldn’t speak to him. She wanted to be there with him, to be at his side but couldn’t gather the courage to do so.

Finally the day arrived, on which Nikhil was going to New York.

She decided to go to the airport and bid him good bye.

They met at the airport and she gave him a hug and finally said good bye.