You are here: Home / Love and Romance / Andy and Disha 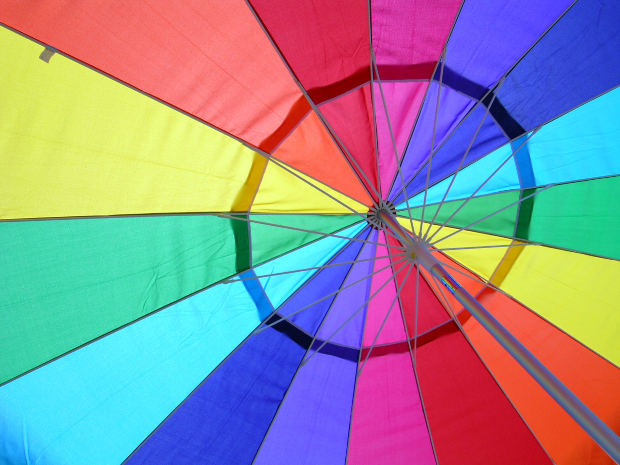 Disha woke up to the buzz of her phone and broke into a smile seeing the message.

She searched the entire cupboard to find the white top and matched it with jeans and rushed to the college.

As she walked through the university gate, her eyes started looking far and wide amongst the swarm of students. She could spot Andy dressed in body hugging tee and jeans even from a distance.

Her heart suddenly skipped a beat.

They exchanged a quick hug beside the shade of a tree. Andy could not resist from giving a peck .She began melting away enjoying the feel of the lips on her cheeks and their world froze.

Their universe was suddenly invaded by a cheerful but awfully loud greeting by Anjali.

“Run folks, Run. We are already late by 10 minutes for Narayan’s class”. Anjali continued her stride pulling along both Disha and Andy.

She suddenly stopped and gave a look at both of them “Do you two talk to each other before dressing up? You both were in black yesterday and today you both are in white”.

Andy was quick to respond throwing away a quick smirk acting surprised and Disha supported by starting a laugh and all three giggled their way into the class.

Both Disha and Andy smiled within themselves that Anjali suddenly became wary today though they had been doing this since the last six weeks.

They were also little sad that it had come to her notice and this game of “black”,”blue”,”red,”green” could not go on.

Disha came back to her present still staring at the white gown on her bed. It was a crafted silk ball gown with a long flowing skirt. The beautician rushed into the room and almost shrieked seeing she was not ready even a bit.

“I thought you already had the pack on your face. Do you realize you that there will be at least a thousand eyes on you in the next three hours?” the beautician said with a tone of concern.

“This is again going to be one of those weddings where the groom cannot hold himself from checking out the bridesmaid once in a while “Anjali announced barging into the room flaunting herself in a figure hugging silhouette. It was three years now after college and Anjali had grown much more stunning from those days of the college.

Disha ran through her list again in her mind.

Veil, hairpieces, shoes, necklace, earrings, clutch, perfume, jewelry and the granola bars added by Anjali to go on for the long hours at the reception. She mentally ticked it all.

Everything seemed to be in place and in order, except for that little thing beating in her chest which does something more than its actual business of just pumping blood. Somehow it did not feel to be in place nor in order

“Hey lady, get all set soon to turn yourself into Mrs Peter ”Anjali bantered and walked away from the room.

Disha stood grounded for a while, the word “Mrs Peter!!!” still ringing in her ears. Her heart suddenly felt heavy.

Andy and Anjali were the people Disha met on the first day of the college and it instantly struck off. They went to college together and skipped it together. People rarely saw them not being together.

Anjali stayed a few blocks away from the college but Andy and Disha stayed an hour away by bus.

Andy and Disha stayed in the same neighborhood but that was not the sole reason they became close to each other. From the day Disha met Andy, it was as if something inexplicable had happened in her life. It was as if she had met life itself for the first time. Disha felt Andy as cheerful, energetic and pleasant and all the good adjectives a person can be assigned with.

As Andy and Disha started getting closer, Disha started realizing herself more than ever. It was the same with Andy. It was as if each completed the other’s life

Andy and Disha started living in a world they had newly discovered and soon their joint study sessions was just between Andy and Disha instead of Anjali, Andy and Disha. They would blame it on the distance whenever there was a question from Anjali about her exclusion.

Disha could never wipe away her memories of that evening when they got closer and explored each other physically in every way a loving couple do.

And there was yet another fateful evening when Disha’s mother overheard their conversation and it was beyond her mother could ever fathom.

Any amount of explanation and reasoning could not get her mother to accept the world Disha and Andy had created for themselves.

Hell broke loose and their world was torn apart.

After three hours of efforts from the beautician, Disha was transformed to a princess from the fairy-tale. Disha’s phone started ringing and the other people in the room jeered noticing it was from Peter. Disha’s father and Peter’s father were the best of friends and together owned a textile manufacturing unit.

Peter completed his education in the west and returned to take care of the family business. He expressed his interest in Disha the first time he saw her in a family gathering and to her surprise proposed to her in a restaurant he had called for lunch.

Before she answered, she met Andy later that evening and wept a lot.

Both the families were very excited, Disha’s mother the most when they all heard about the proposal.

Disha walked down the aisle with her head bowed down almost symbolic that she was unable to face the reality and given in to the untruth. The ceremony was quick and the crowd lauded and cheered as the bride and the groom exchanged vows.

She was taken by surprise when she spotted Andy amidst the crowd all dressed up and looking spectacular as usual.

“Look who I got here as a surprise for you. Can you imagine that Andy, our best friend was almost missing your marriage for the sake a job interview in another town? “Anjali shouted still pulling out Andy from crowd towards the couple.

“Peter, Meet Andy, or formally Andrea D’ Costa, our best friend from college and our partner in all crimes “ Anjali gleefully introduced Andy to Peter.

“I am so glad I met you. Disha mentions you so many times that I almost started feeling a little jealous. Only now I realize it is actually Andrea and I have no reason to be jealous of” Peter broke into laughter before he could complete and all laughed with him.

“Hey Pete, You have no reason to be jealous of any of our college-mates. We unfortunate girls studied in ‘St. Philomena College For Women’, remember?” Anjali added and all burst into a laughter again.

Disha met Andy and wept a lot on that evening Peter proposed to her.

“A mother who is an epitome of acceptance could not accept our world. The world is still not ready, Disha. It would be hard for both of us to see three families and a great camaraderie destroy” Andrea had somehow convinced Disha that evening before she went back to agree Peter’s proposal.