You are here: Home / Love and Romance / Autumn Memories 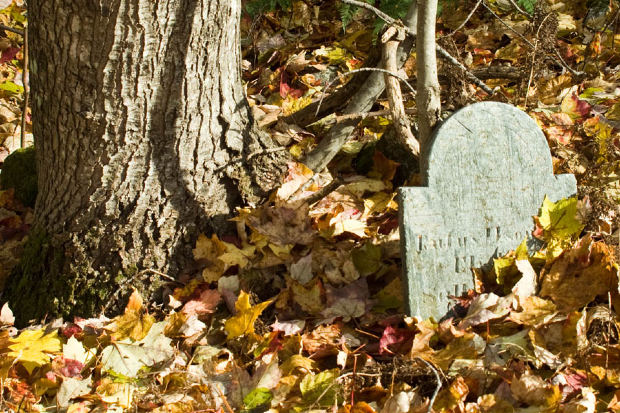 As the first yellowing leaf fell off the tree, Josephine hopped around, trying to catch it before it touched the grass. Clutching it to her heart, she remembered her dead husband’s last words fifteen years ago.

“This year, I’m the leaf that falls off the tree. Hopefully, you’ll be hanging on for years to come”

The memory brought tears to her eyes and a sudden ache in her lonely heart.
She recalled how theirs had been an arranged marriage, a marriage out of convenience.
She had hardly been eighteen back then, when her single mother passed away, leaving her in the hands of a strange man, her soon-to-be husband.

‘Darling!’Her mother had whispered, her eyes watering with the strain of having to stay awake. It was like her body was ready to collapse but her mind was refusing to stop yet. Josephine ran to her side, her heart hammering in her chest at the awareness that the moment had finally come.In her heart, she knew that she wasn’t going to have her mother around for much longer. But a small part of her, the silly part that wished for this all to be a horrendous nightmare, hoped otherwise.
“Promise me you’ll let him take care of you!” The dying lady said, struggling to caress her daughter’s cheek for one last time.
Josephine was wondering who her mother was referring to. But the presence far behind her answered without the need for words.
As she watched the solemn man, much older to her, lean gently against the doorframe, his head bent and his eyes fixed on the bunch of roses clasped tightly in his hand, Josephine’s heart wrung itself painfully.
But before she could turn back to her mother and try to tell her that she’d do anything but live with a man she hardly knew, the lady was gone.
That day, the vicious part of her, one that she wasn’t aware of, swore to hate the man for as long as she lived.

But it was difficult to hate a man like Roger for long.
He was what most women dreamt their fathers could be like and hoped their husbands would learn from. With his eternal kindness and extremely cautious flirtations, he had swept her off her feet gradually.

“I think you should smile, at least for today.”
His deep, male voice prickled the tiny hairs at the nape of her neck. Instantly, she was aware of her clumsily bunched up hair at the top of her head.
Turning, she looked at him, puzzled.
“It’s… our anniversary!” He said, clearing his throat.
Her eyes widened in horror, her face expressing how terrible she felt for forgetting a detail as major as that.
“It’s ok,” He hurriedly spoke, as if reading her embarrassment. “I don’t mind.”
She hung her head in shame, not knowing how to respond, wondering what was making her hate this man when he was being so very gentle with her. She wondered if love was really that difficult to develop, when it was obvious that the man in front of her could most possibly be better than anyone she would have been able to pick on her own.
“We have our whole lives left,” He said, smiling, reading her thoughts, as he gently touched her hand. “Hopefully you’ll remember the next one.”
Placing a bouquet of roses next to her on her bed, he quietly walked out, shutting the door behind him, as the room regained its silence that Josephine has grown accustomed to.

Despite her reluctance and forced hatred, Josephine had found that her young heart was melting for Roger as he determinedly continued to woo her. As the days turned into weeks and the weeks turned into months, their emotional separation was dwindling but the ache of their physical distance was making her go crazy with longing. It made her realize how much more difficult it must have been for him, having to watch the three feet difference between their rooms and wonder if their hearts would ever become one.

A shy knock on the door was the most that her trembling fingers could manage. As the door opened to Roger’s surprised face, Josephine looked away, wondering if he had been expecting somebody else.
“Is it lunch time already?” He asked, glancing at his time, aware that Josephine only ever knocked on his door to tell him his food was ready.
“May I come in?” She managed, her voice quivering.
He glanced at her face and loosened his tie.
She watched as he battled with his own mind, knowing that he was getting late for work but being unable to refuse his wife anything.
“I’ll…I’ll come back later!” She said, taking a step back.
Watching as his eyes turned into pits of shock, she hesitated.
“No!” He said, trying to control himself from shouting out the word. “Absolutely not!”
She entered his room, taking a look around it properly for the first time in two years.
Sitting on his dressing table was their wedding photo, a detail she missed even though she cleaned his room twice a week.
It was weird how people only noticed that which they wanted to see.
“Joe…?” He said, worried.
She turned to him, gulping.
“I… Open your cupboard,” She blurted out as his eyes shifted to the panicked rise and fall of her chest.
His footsteps slow, he walked over and opened the doors.
After a few seconds, he spoke.
“It’s empty.” He said, his voice flat.
She kept her head lowered the whole time, not knowing what to say.
“I…I don’t understand, Joe…”
She looked at him, her eyes coy till they met his.
As she watched the beginning of tears in Roger’s eyes, she instantly understood what had happened.
“I… Are you asking for a divorce?” He asked, his lips quivering.
Unable to say a word, she took his hand in hers and dragged him to her room.
Opening the cupboards, she turned to face him.
“I… I just thought your clothes looked better here.”
She turned and looked at the bed, as his eyes followed.
“My pillow too?” He asked, the beginning of a smile in his voice.
Her throat went dry as he walked towards her and placed his hands on her shoulders. With one finger, he lifted her chin up and kissed her forehead.
“How long I’ve waited for this…” He murmured as her eyes connected with his.
At her utterance of the three most beautiful words he had ever heard in his life, they kissed passionately and made love for the first time in their entire married life. But it surely wasn’t their last. Love had finally found them both.

However, one terrible autumn, fifteen years ago, a fatal heart attack took his life.
“Have I told you recently how much I love you?” He struggled, his voice raspy.
It reminded her instantly of her own mother many years ago and how she too had been taken away from her well ahead of time.
“Only every day!” She replied, her eyes moist and her fingers wrapped tightly around his. “And you’ll continue to do so once you recover from this,” She added, optimistically.
A short bitter laugh escaped his throat.
“You know how seasons change?” He asked, his voice coming low. “Flowers wilt, birds stop flying and trees become bare. We’re like the seasons too, Joe. This autumn has my name on it. I’m the leaf that falls off this year.” He said, his emotions evident in his voice. “And I hope to God that your turn doesn’t come for many more decades.”
As he brought her fingers to his lips and kissed them, she cried bitterly for the man who would always be the love of her life.
Her wedding ring shone brightly.

Josephine had thought that day to be the worst in her entire existence and constantly wondered how wonderful it would have been if she had loved him from the start. They’d have had two more years to make many more beautiful memories. But these thoughts were a waste of time and they represented regret that could never be taken back.

It was shocking to her that no matter how much love they shared, they had never had children. It used to upset her when she had thought about it, sitting by the window sill, waiting for Roger to get home, but then he always managed to make her feel better about herself. He had never let her feel guilty for being the reason behind their child barren lives.

Over the last fifteen years, life had become very dull for Josephine.
Every year, in autumn, she’d stand by the tree in her yard, waiting to see if the leaf that fell off the tree would be hers, waiting patiently for her turn. Because, in life, she had nothing left to wait for. But in death, she longed to be joined with her husband. That longing grew into an obsession that took over her mind and soul.
She’d sit under the tree, holding on, hanging on, but not wanting to any longer.
For fifteen long years, she spent her lonely days awaiting her chance.
The first night after Roger passed, Josephine didn’t think that she’d be able to live through the silence that reverberated through the walls and the emptiness next to her that consumed her. But eventually, the silence grew more tolerable and the empty seat next to her became a familiarity.
Every night, she still left a plate out for her husband.
But tonight, she wouldn’t need to.
With the leaf still in her hand, she knew that her time had come.
Taking a deep breath, she let it go.
Slowly, the leaf fell to the grass.
And with that, so did she.