You are here: Home / Love and Romance / The Birthday Present 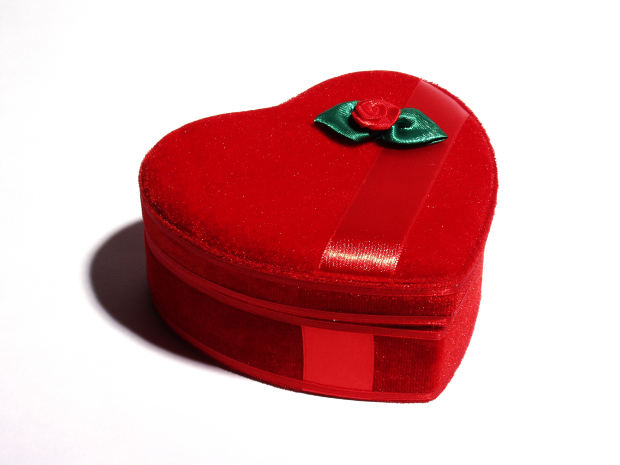 “Hey!”
“Here,pass the ball”shouted Amir,a sweet 15 year old boy who lived in the valley of heaven,Dafyan.
And now the ball comes under his feet. He started sprinting with the ball out pacing his opponent.
He halts and dribbles across two defenders. Moves forward to the goal line and aims at the goal.
The goal keeper anticipates and dives at a full stretch.

But that was a fake shot. He changed foot and scored easily.

“Yeah..”he runs down the field with arms open wide and the rain kissing his body at every corner.
His teammates follow. The game ends 3-0 with Amir as the man of the match.

“So we scored 3 goals that means the total we are getting today is”said Amir calculating the winning prize.

The captain of the opponent took time counting his pennies and ultimately emptied it in Amir’s hands. Amir was delighted as he had won a crucial amount for his team. Now the time came when this amount was to be distributed. Amir got Rs50,and the rest shared the remaining.

He was excited, as now he wanted to spend this money. He thought hard but could not think about a particular thing, so he dismissed the thought and picked up the route to his home. The rain had stopped now and he was very hungry but the route had no shops. He continued walking.

After a distance he saw a girl selling roasted corn(bhutta).

He ran near her stall that consisted of 4 bricks and some burning wood and waved the Rs50 note.

The girl lifted her head who by time was heating up the fire. Their eyes met and twinkled.

“Only one?”she asked breaking the silence.

No response from Amir who was busy staring the girl

“Oh sorry! I was calculating the price”

“So how much a bhutta costs?”asked Amir in a soft voice

She quickly peeled another corn and placed it on the fire, occasionally waving the bamboo fan over it and turing it at short intervals. Amir was mesmerized by her beauty. He stood motionless.His heart would go sad the time her hairs hid her face,but he was patience as she gently stroked them behind her ears.

“Here are you two bhuttas”said she handing them to Amir, who by the time was in his senses.

“But I don’t have the change”she replied, searching her small money box.

Amir thought for a while and replied, “No problem,keep the change” he winked and ran away.

She smiled. This continued for some days. She was always short of change and he would always relieve that. It took Amir some time to find her name but he did. Her name was Jaya, a simple name as Amir would always say. Slowly and gradually they became close friends.

She did as he said, “You always asked me who was the girl I like the most?asked Amir in a special tone.

“There she is”replied Amir pointing at the well, she turned back to she herself in the shining water and Amir by her side smiling.

“What do you think of yourself?”she shouted.

Amir was taken a back, he was not expecting this from her.

“You called me just to show me this nonsense and you mean to say that you love me?” She was in rage

“Oh!I see but here is my answer,
I don’t, I do have other things to see”

She left the scene and Aamir was heartbroken. They did not see each other for days and whenever Aamir passed by, Jaya would turn her face. Amir was frustrated and was cursing himself for his actions.
He left playing football and was always wandering alone in the streets.

“Hey Amir!How are you?” a voice called from behind.

Aamir quickly turn back to see Abu dressed in his football outfit.

“So why aren’t you coming these days? You know we lost the match yesterday “said Abu offering Amir a chocolate.

“Oh I’m sorry but I recently had some work to finish”said Amir in a sad voice.

“No I am fine”replied Amir giving a fake smile

“No you are not” said Abu

“Oh you proposed since when?” asked Abu.

“A week ago I guess”and they sat on a bench.

“Oh and I know the answer,she rejected you”.

“You know she is always like this from the time she lost her parents, she rarely talks to anyone”

“What happend to her parents?” asked Amir.

“Oh you don’t know about this?” questioned Abu.

“So here is the story. When she was small around 8, the police broke in their house suspecting some terrorist activities. Her father retaliated with a waving pistol which was an attempt to save his family but the police open fired at the man. Her mother was in the kitchen and ran out holding Jaya. The police people shot her as well suspecting her to escape. Later the news came out to be fake and Mr Singh,the police commissioner was suspended. Now he lives in the village near by.
Many say it was an accident but only god knows the truth and yes she hates the police and for her these love matters aren’t a matter of concern.”

“Thank you Abu”Amir cried with joy having known the reason for Jaya’s sadness.

Jaya turned back to see Amir but she ignored him and proceeded in her tracks. Amir came running and stood in front of her.

Jaya came by as she was told but Amir was nowhere to be found. She waited for an hour and left annoyed.  She was at her home and just had her breakfast and was going through the news paper when her eyes widened in surprise.

“Mr Singh,the former police commissioner found dead” a headline said. Jaya gave a faint smile but in her heart the joy of the world was achieved. She folded back the news paper and sat back. An envelop was kept on the table bearing her name ,she was confused about its existence so she opened it and it said.

“Hey dear
I hope by now you would have got your special gift.
Amir.”

She was confused so as to what was this gift and suddenly turned her face to the rest news paper that showed Amir held by the police.

Amir had murdered Mr Singh for the sake of his love.