You are here: Home / Love and Romance / The Bracelet with Love 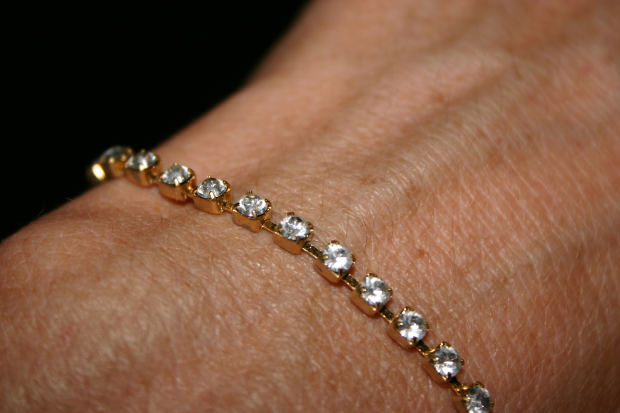 The hustle of people moving around, the crowded space full of people and the welter of sound of people talking with each other and phones talking have always been annoying him, particularly the lack of personal room. But he has used to it. Every morning he experiences the same.

“Who says me to live in a busy city?” He thought to himself.

“Who makes me having to travel by train every day to work?”

He isn’t quite fond of travelling by train. But he quite likes to observe inside the train, observing other people around him. It seems like everybody are busy. Some are reading newspapers, some talking on phones, some taking a nap. And more just standing like a zombie and doing nothing. Since he was a child he was eager to explore the world, nevertheless his eagerness has been fading away. Yet he is still more observant than most others.

It was the usual scene that he saw every day, until he saw her.

She was a young, petite girl. Her lovely face and soft, shiny black hair has attracted him. It was seconds before he noticed something even more special.

She was wearing a bracelet. It has a blue crystal tip adorned by golden surroundings. And the shape was special. A diamond shape, plus intricately decorated red linings on top of the crystal left him a special image.

And since that day he met the same girl everyday inside the train, at the same apartment, at the same time, though there are exceptions at times. He seemed to enjoy the company of her, but he hadn’t spoken anything to her, just watching her intently.

Until that day, things have changed.

One day he was near her inside the train. Unexpectedly she dropped the bracelet. It fell onto the ground with a sharp clank. He immediately reached out to pick up the ring. She thanked him, and their first conversation started.

They knew each other for some time, and one day the girl curiously asked him. “Why did you keep spying on me at the first start?”.

The boy silenced for a moment, then he reached his pocket for his cell phone, and he showed a picture of another girl.

There she was. “She’s so beautiful! So charming.” The girl thought. And she noticed there’s a bracelet on her wrist. And to her surprise it looked the same as hers.

He said “She has left me for some time. She has a bracelet that looked exactly like yours.”

The boy lowered his head, full of remorse.

“I tried to please her, and I bought the bracelet as a present. She always like presents, but I am poor and can’t afford many. In addition, I have to work all day long. I should have more time with her … ” He sobbed and couldn’t say any more.

“I understand. Don’t be sad.” The girl patted his shoulder, trying to comfort him.

And the two remained silence, seeming to enjoy the precious mute company of each other.

“What are you thinking of, darling?”

“Oh.” The man extricates himself from his thoughts. “The bracelet, it’s just some old thoughts about you and me.”

“That’s quite some time ago, it was how we met.”

His wife smiles at him. It is an angelic smile to him, attractive as ever. And he smiles back.

“The bracelet. The one that I gave to you.” The man replies with a smile. “Wear it when you’re older, boy. And give it to the girl you love. It’s a bracelet with love, and with no remorse.”