You are here: Home / Love and Romance / Clarity 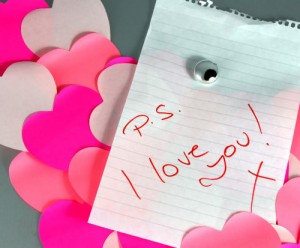 Love Hearts – I Love You
Photo credit: hotblack from morguefile.com

The clock strikes five and people being to leave. She looks at him from her desk, hoping he turns around to see her. Or she could say, notice her. They barely talked to each other in the past two weeks. She was very busy and he was away and both of them were somewhere, in the back of their minds, hoping that either of them could begin talking. In other words, let down the pride.

She saw him look at her, with some woeful glance for a second longer than he usually would, and left.

It was becoming harder by the minute to breathe. They were feeding off each other like parasites. Because somewhere, after a year and a half, it become a chore. At least for him, it becomes a chore. Or so she felt. And she could never have known, because in some weird twisted way, they thought communication could do more harm than good to them. She could feel the distances growing by the days and instead of trying to swim to the shore, they were only trying to find more sea to fill between them.

But at the end of the day, wouldn’t you rather bury yourself in the pillow, knowing damned well, that you tried as hard as you could? While love becomes that missed opportunity, feeding off your insides.

“I’ll see you tomorrow,” she told her colleagues who worked the late shift with her. They wave her goodbye and she gets into her car.

She keeps thinking of words she could put into use to cheer up the sad cloud that had become of him. She keeps thinking of sweet nothings she could say to him, and she came up with nothing. She was always too dramatic, he would say. She was always too indecisive. Needy. She did not know of the things she wanted, till she could not have them anymore. And now, their life too was falling in line with those things. And she was not sure if she was pushing it or keeping it all from falling apart.

A crease marks her forehead and she doesn’t know what she was thinking.

This. That. Him. Words. Obscurity. Suffocation. Anxiety. Love.

And then she screeches to a halt.

All she knows is that her hands are not on the steering wheel, they are over her ears– protecting herself. Her eyes begin to rain, the tears are unstoppable. The other driver is as manic as she is; only he is running around in madness. Her heart beating as fast as it could go, and nothing made sense.

So what if we haven’t been ourselves in a long, long time. So what? I knew that this was what I wanted. I want you.

She opens the door and rushes in. she calls out his name, to no answer. And she finds a note by the telephone and it says:

“I’ve been so terrible to you. I can’t do this anymore. Goodbye, I loved you.”

At first, it is hard to believe. And then the dread sets in and the reality sinks.

Why does clarity matter when the truth behind the haze is so bitter? It does come. The lucid clear sensation that yes, this could be right. The unimaginable feeling that everything makes perfect sense. It does come.

But every second too late.