You are here: Home / Love and Romance / From the Kashmir’s Vale… 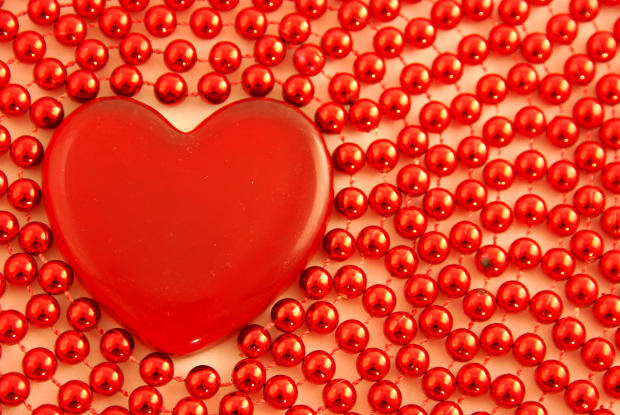 When Aaron and other soldiers were sent to Kashmir’s vale, for the Military Training camp, a team of physics research scientist had also arrived there to produce a documentary film on Kashmir’s atmosphere to complete their undertaken project. Lovely Crystal, a pale faced-young, was one among the research team. She aged around twenty and her pale pink lips and gazelle-blinking eyes made her figure seem to be like Mother Eve. Aaron, who was young and tall, a soldier, spoke frequently with her. She too didn’t hesitate to step ahead. Their friendship, within few days, grew deeper than the Pacific Ocean.

One day, when soldiers were about to train for mountain climbing, research scientists also mingled with soldiers for their entertainment. Soldiers helped them to enjoy the mountain-climbing. Crystal too fastened her belt to climb the hill. Saline mischief in her eyes attracted Aaron to indulge her. She almost attempted to climb for eight feet high. Accidently the belt loosened and she slipped down. Aaron, who was standing right below her, caught her sliding down body. He held her tightly, with both his arms across her waist. She then, turning towards him, encircled his shoulders with her arms and strikes her forehead to his. His heart started pounding with a beat for another is now landed on it.

After eight years with Saba’s warm company, Aaron found such tender affection in Crystal’s hug. But, she was almost half to his age. “Small insolences laughing in your smile, I shall not forget it, not until I cease to breathe” he whispered in her ears. From the day, when he had fallen in her sight, she actually fell for him. After hearing these words from him, she at once kissed his cheek, loosened the belt and ran away.

Two days later, during the rock fishing, Aaron missed to take along his headphone. He seeks Crystal’s help to get it to him soon. So she went. In Aaron’s tent, she looked for it every corner of the tent. At last, she found it. Before it she found the diary, which was written by Aaron himself. It had been titled as “My days with you- Saba”. Crystal carried the dairy to her tent, hided it below her bed and went to Aaron to give him his headphone.

The following night, she made prepared herself to get into the book. At first, the question “who’s this Saba?” knocked her head. Keeping it aside, she entered.

“Today, we can delay it, man. No college from tomorrow onwards…” one of his friends, carrying the guitar, said.

“That’s what man. No study… No Exams…” Steve upholds the latter’s words.

“Let’s hang out this night in Wonder garden” Aaron asked and everyone, of course, accepted.

They carried out the night, chilling the wine.

“Our gabbles and guffaws may reach to Saba’s residence”

Dennis teased Aaron, for being close with her. Saba’s flat was in the big apartment opposite to the Wonder garden.

“Aaron may feel depressed for being away from her. And she’s about to leave to Paris for the fashion show” Dave cracked joke.

“No, no. Both are still in contact, even after hers Hitler father’s tight guard. How can he be away from such a pretty Model” Steve unveiled the secret.

Before Dennis ends up his word Steve started “Yea …And she’s for you”.

Night was carried out somehow gabbling. Actually, next day, Aaron father was to arrive the Aaron’s dwelling.

Next day, after the sunrise, these guys fell asleep on sofas and armchairs. Air-condition was turned on, but sliding window doors were kept open. Ceilings were boundlessly in motion. Beer bottles were laid irregularly on the console table.

When the door gets knocked, can say Banged infinite times, Aaron came out of his sleep and opened the door. His father had arrived to him. After coming across his son’s misbehaviour, he comes to the terms to join Aaron to army. For, at least, he may work for his country. He did hard for Aaron, for no degrees were completed with blistering stars by Aaron.

When he was away from his native, the memories of Saba often tortured him. At last, on the advice of another soldier, he came to terms to write a letter for her.

It took no more time to reach her. At her first glance, her eyes filled with tears of joys. Aaron had appointed a hired taxi for her. If she had true feelings for him, she must pack her bag and catch the taxi, forgetting her breed. Feelings had already blind folded Saba. So, she attempted a crime to get eloped with him.

Four years with Aaron rolled out with permanent attraction towards each other. Both were seemed to be born for one another.

Once, he took her out to snow wrapped mountains and showed her the earthen fence high lightening the border. He rested on the snow and said “Come into my arms; Lose yourself in my dreams”.

She in her navy blue suit seemed, with her blonde hairs lay in curls over her delicate ears, like spring time come alive. “You dwell in the beats of my heart, look what my heart says” she answered.

He heartily smiled at her…. Breeze blew the heavenly music into their ears. Palm trees shook, as to step for the music. When both hold their hands for the dance, she put forward a smile. So provocative, the smile was.

Such a smile had curved on his lips, once before. When her father had tried to keep her away from him, he had held her palm firmly and said “I shall not get away from your path. I’ll take you away from this solely world to my blessing dream world”. And in round way she “you’re my soul and spirit. And how can a man live without it” had answered. Then such a provocative smiled had curved his lips on seeing her father.

Within few days, Lieutenant had warned soldiers about enemy attacks. Soldiers squared their shoulders for nation’s defence. When soldiers went out for the battle, an enemy soldier entered his barrack and shot down Saba. He had bitter vigilance on Aaron, as earlier in one of the battle, Aaron had fired a bullet into his right chest. Immediately report was made to reach Aaron. He came to her, held her upper body in his arms and made his head rested on her head.

“Sorry, soldier. My journey will not end without you… thanks for your presence… Aaron…” she dragged and disappeared from the curtains of the time, forever. Rivers of tears flew from his eyes… “You still dwell in the beats of my heart… Saba” he cried out.

While, in hurry, Lovely Crystal was turning the pages off quickly, her research-mate Anna entered the tent and asked her to put off the candle.

“Yea I’ll do it, myself. You can rest now” she said and acted as if she’s sleeping. When Anna underwent sound sleep, she awakened and started detecting the hand written dairy. Now she was almost amidst of it. She came across an incident…
Aaron was in the secret training camp. It was of Marine Commando Force. Here it was restricted that even Marcos’ soldiers must not inform their parents about their membership in following troop. Then, how could their soul mates can?

Even though he was away from her, both were in sentimental attachment towards each other. In of his call,
“Valleys and Mountains sing together,

That a wounded heart is waiting to get her” he expressed his feelings for her.

In reply, “If you love something let it go, if it comes back to you it’s yours, if it doesn’t, it never was” she said.
And green and blue, his eyes twinkled; like a candle flame, where salt is sprinkled. His heart leaped higher than his fighting-craft ever done…

Night watch guard disturbed Crystal’s peace of reading by his interference. “It’s upon the time limit. Go to bed” he forewarned.

“It’s alright” she so blew off candles and went on bed. His tragic movement, of losing his beloved, had pierced her heart, more than any aimed arrow does. “Now he’s all alone. Should I be his partner, to recover him from his grief…? Would I be able to indulge his thirst, as Saba had…?” such thoughts over and over stroked her mind. So, she couldn’t have sweet dreams, as she used to have it before.

Crystals inspiring and motivating words always used fill Mr. Aaron the air of superiority. Whenever, if he was in tensing sense, her heart filling voice used to recite hymn for him, which used to help Aaron to come out of the inferiority complex. This created a sense of gentle warmness in his heart for her.

Days rolled out, and research scientist left the Kashmir’s valley and reached their dwelling. But, still both were in contact. Being deeply loved by someone, gives you strength; loving someone deeply gives you courage. He was supported with both strength and courage. True love is a durable fire in mind ever burning; never sick, never old, never dead; from itself never turning.

In one of his call, he seeks her permission to tie her knot with himself. She too was eagerly waiting for this golden opportunity. She invited him to her town.

One bright sunny morning, as per appointment with her, Aaron reached her town through the direction of the tracks. Half passed ten said the big round clock on the city tower. He lifts up his sun-burned face and narrowed the eyes to note the exact time. His heart started pounding with a beat that shocked him. Within the fifteen minutes, he’s going to tie the knot with his close friend. He held his fist tightly, takes in the deep breath and march towards the church, opposite to the enquiry booth. Crystal was standing right before the Christ statue, faced away from the entrance. He goes towards her and holds her palm firmly.

She smile at him and says, “Lord, remind me that what matters most in the end is love I carried in my heart, and the love I shared in my life with yourself, my soldier”

“A true friend will be a friend in times of all kinds, forever”