You are here: Home / Love and Romance / The Inhibitions of a Pauper Princess 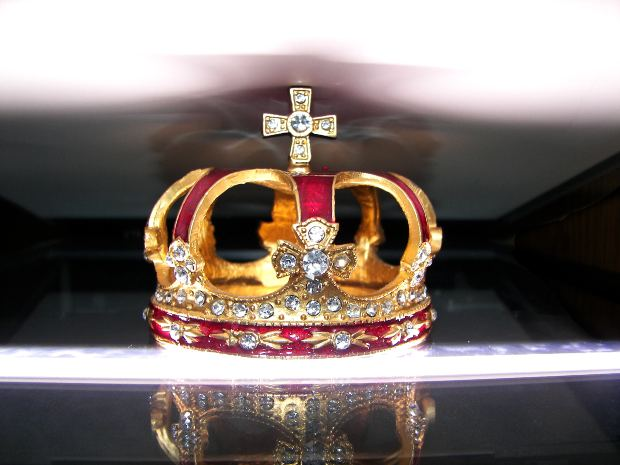 Standing in front of that large mirror, a thousand thoughts were passing through her head…

“…being a girl is a curse!” she uttered to herself and rolled her big round black eyes over 360 degrees.  She couldn’t even describe her feelings to the man whom she loved the most.  She reminded herself of her mother’s words and mimicked the same in front of that large mirror,

“When a girl expresses her love for a man, he comes to thinking that he owns her. And No girl would want to be owned.  She would love to be loved.  Not owned…” Saying this, she unfolded her braid.

How could she say those three golden words to a guy as perfect as him!  She whispered herself “Tall, fair and attractive…” He could be the man of anyone’s dreams.  But he would fulfill the dream of the luckiest of them all.  And that ‘luckiest of them all’ surely wasn’t her.

She kept looking in the mirror and thinking about this man in her life.  This man, whom she met daily, spoke to him largely, sit beside him shyly, advised him briefly, counseled him smartly and lived his life, moment after moment.  But did not have the courage to say what she felt for him.

She remembered how, three years ago, they had met at her friends’ place.  She thought it was a huge pressure to fall for a guy who happened to be the brother of your best friend.

She stood there in front of that large mirror and closed her eyes.  With her frowned face and dull temperature, she once again did what she was best doing at – Daydreaming!

She remembered the first time when she had seen him.

‘Those arms in that utterly mannish vest’, she thought, ‘I wish to be in those arms’.

And she grabbed herself with her own arms.  ‘That torso of yours,’ she said, ‘I wish to be clinging to it’. And she raised her left foot and rested it on her hallux.

She remembered how he had once pressed her shoulders, expressing gratitude when she helped him to come out with flying colors in his ‘Literature’.  She said, ‘I so wish to be adorned by those large hands’.  And she lifted her two tiny hands and put them on her shoulders.

She remembered how his lips would part when they would meet every time.  She raised her neck and moved it from left to right in a semi-circular rotation.  She said, ‘I wish to be rubbed by those lips in each element of my body’.

‘It is difficult when a girl loves a boy…’ she thought.

She could understand the pain of not being loved by a person whom you love a lot and secretly admire and, to add on to it, if he loved someone else, then the pain multiplies in non-human immortal digits.  ‘I am surrounded by burning flames when I see you with her’, she muttered to herself with closed eyes and angry cheeks.

Standing in front of that large mirror, her hands came down.  Her feet rested on the ground.  She moved back her neck as if putting it back on her own body.  She said, ‘It is difficult to be a girl who loves a boy and wants to be with him when he is clearly a Greek God and you are an ugly duckling!’

She then opened her eyes and saw herself.  There she was…  Dark, fat and unshapely…

She murmured to herself, ‘A Greek God would always look out for an Athenian queen and not a big bulky Indian buffalo!’

She could see those curves.  And she mumbled to herself, ‘Only a bull would head towards me…’  She thought it is forbidden for a girl like her to fall in love with a boy like him.  She moved away from the mirror and looked around herself.

She saw that second hand dining table which, she and her mother had bought by scantily spending for four large months.  She saw the unwashed faded blue curtains which were sewed on her own sewing machine.  She saw the rusted stove and the steel utensils.

‘I live in a filthy stable and you in a palace’ saying she smiled faintly.  She walked towards the table and sat on that rock hard wooden chair.  And got back to her reading!  She advised herself, ‘Inter-caste is still fine but inter-class, no chance!’

She murmured to herself, ‘Mother always knows the best’.  Her mother had brought her up in those rotten conditions and always treated her like a princess.  The lady would go shop to shop, every provision shop, each day to fulfill the orders of home-made snacks so that her only daughter could study and fulfill her dreams of becoming a medical practitioner.  She whispered to herself, ‘Mother always knows the best’.

She recommended herself, ‘For the sake of this extremely unique friendship that we share, you should shut your heart up and start thinking using your brain.  It doesn’t seem rational at all.  He looks at you as a best friend.  He likes her.  She is his ‘Athenian Queen’.  He wouldn’t even let you appear in his dreams.  Love is ephemeral but friendship, companionship lasts forever’.  Tears welled up her eyes and she felt low.  She stopped her hands to wipe off her own tears and let them dry.

Sitting on that rock hard wooden chair, she happened to look at the candle stand on her semi-broken centre glass table kept at the corner of her stable.  She remembered he had gifted that to her on her birthday.  She smiled and murmured to herself, ‘Not everyone gets what everyone desires!’  Her eyes were still moist.  Her cheeks were still wet.

She turned her writing pad to the last page and wrote on it with her unleaded pencil:  ‘10 reasons why he would reject me’. She brooded over it for some time.  She picked up the yearbook that was kept at the nook of the table along with the dish of some coriander and fenugreek leaves kept for drying, the smell of which had filled up the whole place.  She, running through the pages, reached to page number 36 where his snap appeared.

‘Prince William’ she said, ‘Why can’t I be your Kate Middleton?’ she sighed.

Then she shifted her focus to the writing pad and sharpened her unleaded pencil.  Suddenly she noticed his details under the snap.  13 November appeared lateral to the detail – birth date.

‘You are one day elder to me’, she smiled making a cheerful gesture.

She gave a closer look to his profile details when she noticed ‘1988’ along with 13 November.  ‘O. M. G.’, she exclaimed. ‘You had to be one year younger to me!’ and she dimmed her eyes.  And under his snap appeared hers… ‘You are the other woman, not me’, she exclaimed.

She spoke to that snap, ‘Little Miss Perfect. Walks on her Toes, drives a Mustang and smells like Rose! How I hate you Missy for stealing my guy!’ and she shut the yearbook making a big bang sound.

In her green blouse and black skirt, she thought she would definitely be the destiny of some pauper.  She lowered her eyes and gulped down that thought below her throat.  Pressing her head with both her hands, she spoke to herself.

‘Why did you allow it to develop so much? What’s wrong with you?’  And then she said, ‘But this way too, it’s inappropriate.  He shares a much wonderful relationship with you, acknowledges his love for you, cares for you, shares each of the precious moments of his life with you and she… she is just a trophy girlfriend of his… Why can’t he himself come to a realization? Why do I need to tell him anything? Does he not understand what I feel for him and what he feels for me?’

Saying this, she again went back to that large mirror, took out the thin circular black bindi and placed it on her forehead.

Hearing the sound of the most familiar car horn, she quickly flooded some books and stationery in her jute knit bag.

‘Are you ready for the big achievement, Prina?’, she heard the man’s deep voice.

‘Today was the Poetry recitation’, she realized.  She shouted in an oppositely feminine shallow voice, ‘Yes Deepak!’  For the last time, she appeared in front of that large mirror and commanded herself,

‘Need to cheer up.  He should not know.  Smile! Laugh’!  With her tiny fingers, she wiped her cheeks dry and ran out of that rattle.

There he was.  The man of her dreams, waiting for her in his E-class Benz… He got out of the car and opened the door for her on the other side.  ‘Princess’ he said that with grace as he always did,

‘please land in and recite the poem once before we reach the hall’.

She suddenly remembered that he always happened to call her ‘Princess Prina’.  She sat lifting her right foot in first and then the left.  He reached the driver’s seat and said, ‘We aren’t leaving till you recite your 14 lines…’ and gave a perfect, vertical face, Greek God smile; that she had longed for the whole day to behold.  She observed the black leather jacket that he wore in summers in his Air conditioned car.  She smiled and recited her sonnet…

‘Dark, so dark, is the voice of my heart

Deep, so deep, is the eye of my Adam

Shallow, so shallow, is the serenity of my thought

It Simmers, and simmers but lengthy beneath

I wish she should come to thee

And hug you with her legitimacy

Sirrah, bring thee to me

In my Cerulean ogle

The beauty of the Amor

My zest with the key…’

She lifted her head up and saw his twinkling eyes.  He listened to her non-heeding to any other voice.  Tall, fair and attractive, two large hands on that steering, torso of a stallion, he dragged himself towards her and clearing her hair from her face and placing them on her left ear, he said, ‘You are my princess.  You are and you shall always remain … – My Best Friend’.

She gulped down her sanity.

He got back to the steering.

‘Why don’t you comprehend? Why don’t you realize? How will I say it? It will make things difficult for the three of us.  I can see it in your eyes, in your lips, in your breath, in your face and in your intentions.  Why do you need to torture me like this? Why? For how long, will I survive this pain? And for how long will you conceal this love? With the largest of the large differences, how will I acknowledge the same to you if you don’t even apprehend what you have inside you for me?’

Clearing her face, she lifted her hair and placed them on her right ear.  And smiled, like she always did…  And whispered to self, ‘Mother always knows the best’, and placed her tiny fingers with her tiny hands on her black skirt as a pauper princess is expected to do.