You are here: Home / Love and Romance / A Last Date 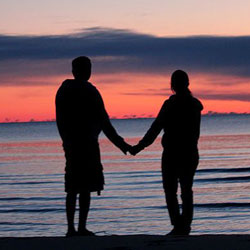 It was a different feeling for her, she didn’t knew how to react or how to express. It was an amalgam of emotions…afterall her whole world is going to change now. Her love was going away, her life,
the reason to be full of life was going away from her. She was numb, carrying a void inside her heart, she was cold and pale,trying to hide her tears behind that smile. A noise, a mess of thoughts was there inside her mind and she again have lived all those moments she shared with him.

Suddenly auto stoped and driver asked her, “madam u want to step out? its gol chakkar..”

She all in a hurry grabbed her bag and stepped out of auto. She took a whole 360 deg view then called him. They saw each other, trying to give as hard looks as they can as if they are ready for some fight. It was rather a kind of ritual for them, their day couldn’t end without a fight. So they argued for a moment or two and then jumped into another auto for metro station… but no matter what they say to each other or what others see them as, deep in their hearts they knew all these silly fights or arguments are nothing in front of their love. Their eyes got fixed at each other, for a moment they looked at each other. He smiled and then she smiled and once again they are back to their love, sharing their stories and thoughts and in between those laughs and talks they reached their destination.

As it was their last day together, she wanna spend most of her time with him in alone. Where they could talk, where they could kiss each other for the last time. So in a crowded city like Noida its very hard to find any such place, so they opt to watch a movie. They both knew they don’t give a damn about movie because story of their love was at a more critical point than any movie could.

They rushed to the theatre as they can’t waste even a single minute. And in all that hurry, she again fell down on the escalators and looked here and there so that nobody could laugh on her. But like always he was watching her, and he started laughing because of her kiddish stupid non-sense things that she does. And that just bursts her into tears, she was holding them from long because she decided not to cry. But now she lost that hold she was crying badly and seeing her like that he just hugged her and hide her in his arms, he knew all the ways to treat his baby girl.

Movie was just an excuse for them, all they did was consoling each other from crying and supporting each other to be strong. He kissed on her forehead giving her an assurence that he’ll be there with her always and come back to her soon. She kissed him passionately giving him a belief a faith that she has given all her’s to him. Movie got over and they went out for some lunch. It was their last lunch together, so they enjoyed it alot, laughs talks…thoughts they shared everything. Now they both realized its been too long for both of them to be together and they should return back to their respective places as he has a lot of things to wrap up. No doubt they were on the verge of breaking, but they acted maturally and decided to go back. They pick up a rickshaw so that they could get some more time to talk and he gave her the most precious piece of advice on the way back to metro station.

They reached the place from where they knew they can’t accompany each other anymore, they had to go in different directions. Reaching up on the metro station, they bid their formal salutations. He kissed her forehead and she kissed his cheek. a hug that they wished to lasts long forever and then…. I LOVE YOU.
She turned back and started walking, then paused for a moment turned back to get a last glimpse of him, he was waving his hand in goodbye. She waved her hand too and then she left that place inhaling all the coldness of the whether inside her…

And this is how he was gone and her heart beating slow and slow, in a hope that she would see him again, that he would come back for her…