You are here: Home / Love and Romance / A letter to marie 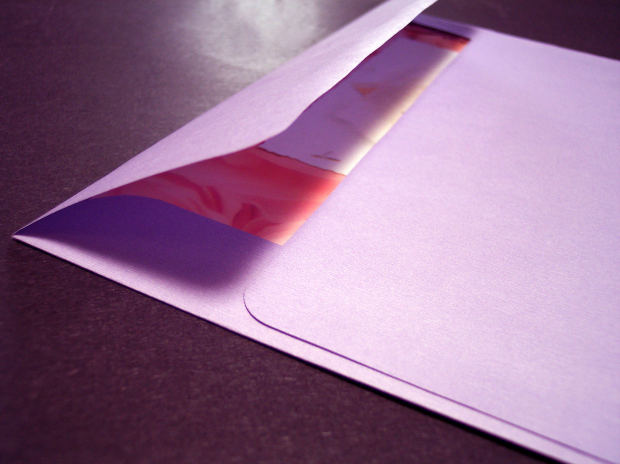 This could have changed my life that day but I could not. I did not dare. I called her, she came like a princess but then, I lost myself in the midst of the fog again. I said in the letter

I wanted to tell you this, I always wanted to tell you this. I felt the thing which no one could have felt for you. Do you remember the day in pre-primary class? We both were talking and the way you were describing about how you wanted your ‘king of dreams’ to be, flipping back your hair and speaking about the bond you would share with him. That made me think, I still think about it. Can I be the one, the one you are waiting for? You are like an angel in the midst of fog. I loved you more than my own self, I still do not that I don’t now. I was hoping to give you this letter one day. I just wanted to conclude that I do love you. I want to marry you. Since childhood I just wanted you and me to be in a church where we would say “I do”. But it looks like you never gave a thought about it. Whenever I came with courage once I saw your face I would get scared. I was rather hoping to give you this letter. I love you Marie and I always will.

Today was the day, the last day I could give it to her for she was going far from here, very far. I went to the station to get a last glimpse of her and give this letter. I went to the station picking up a lot of courage and went. There all her friends were crowded around her. This complicated things for sure. Now how could I give her the letter?

I went near and said “hi Marie. uh…. I.. I was just wonder..wondering that I could um I could give this letter to you as a remainder and my farewell to you. Bye!” and left the station as soon as possible. I did not  think nor expect her to read the letter. I mean why would she read a letter from someone like me?

I walked, pondering over it and walking simultaneously. Suddenly I felt a lot of pain and I felt blood oozing from my head. The last thing I could remember was people coming and trying to carry me.

I suddenly felt someone pressing my leg I woke up with a start and saw Marie sitting there. I thought it was a dream but could not think about it as I fell, unconscious again.

This time I felt a jolt of energy and pressed myself to get up. There was someone I never expected. It was.. It was

She held on to me and helped me get up with tears flooding in her eyes. She said “Why did you do this?”

” I did not do this I was walking on the road and then fell and and everything became a blurr then I felt as though you were there and I never actually realized it was you. I thought I was dreaming when I just woke up now I felt you” I blurted out like a small child in shock.

She became in somewhat an angry mode and then handed me a letter and quickly rose to leave.

I felt completely fit now that she was there. As I read the letter I became more and more shocked. It said

I said those things in kindergarten because I wanted you to be that person but then seeing the lost look on your face I thought you were not interested and that you never liked me. I felt everything you felt towards me. I woke up every morning and tried to get dressed up in a way to impress you but it felt like everyday was a failure for I felt like my attempts were in vain. Whenever you called me and tried to talk to me you ended up telling nothing. I feared that you would tell me to leave you. But the day before yesterday when you came and handed me the letter I was deep in thought wondering what it would be.

As I sat in the train and read the letter my eyes opened up wide and as I requested for the train to stop I was afraid I would lose you but I did not want to give up hope, I did not want to leave you again for I would be lost in the fog and so would you. I came running and running and found a crowd of people standing over you, trying to lift you. I felt a lot of pain and guilt thinking I was late to save you. I called up a taxi and rode with you to this hospital but when the nurse asked my relation with you I ended up saying wife for I realized that I loved you more than I thought. I feel like a stupid writing this to you.

Two days I sat by you, pressing your feet and talking to you, hoping you would wake up soon. The other day when you woke up I expected you to say something but you fell unconscious thus, leaving me in misery again, leaving me in the fog again. Every minute I waited for you hoping to give this letter to you. I love you and I always will. Please, if you ever loved me marry me. I will say “I do” in the church I won’t leave you in the fog again. For now, you would do the greatest favour by resting.

I felt so happy I could jump. I rested remembering her words. I finally fulfilled my wish. She was my dream and so I Hers.

Tomorrow if god asks me how I lived I could tell him I lived his life to the fullest.