You are here: Home / Love and Romance / The Lunchbox 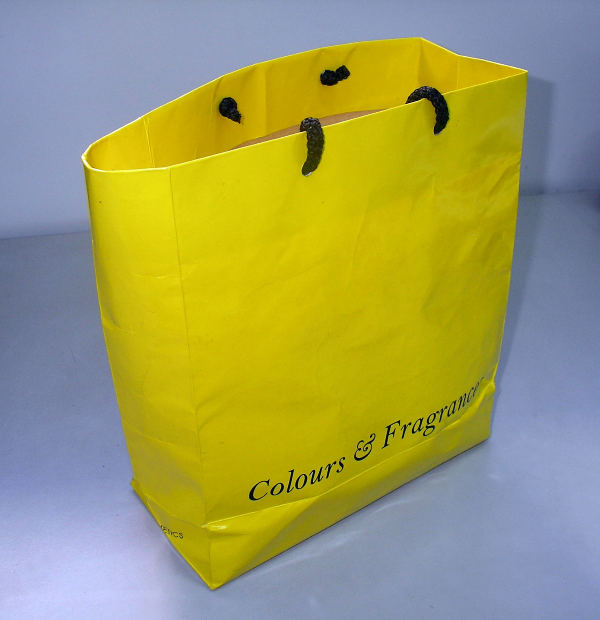 “Twenty seven years is a long time,” she said to herself as she marked her forehead with a red bindi. The water was still dripping from her wet hair when she heard a grumble come from the bed. She could see the reflection of her husband turning in bed, and sighed.

Savita was only twenty-two when she got married. Her marriage was a dark cloud– childless and the death of her dreams. She wanted to know the ways of the world,travel,and know unknown souls. Though when she met Aravind, she bequeathed her devotion to him. His ways were harsh, and at times he would appear to be on his own. The recent years surfaced the cracks in the foundation of their marriage. Age was catching up to them, and she could sometimes take no more.

She stared at Aravind while he pushed away the breakfast and lost himself in the newspaper. The steam rising from the untouched plates and him sipping the tea were the only movements in the room.

“I will be late today,” he said as he got up to leave.

“When are you not?” she replied. He looked at her, amazed; she was not the kind to talk back.

The door slammed shut and she was alone to reflect on what had escaped her lips. If it had been years ago, she would repent. But at that moment she felt different- as if a sense of freedom had taken over her. She walked to the kitchen sink and looked out the window.

He was still standing there.

She did not know who he was, or if she had ever known him. He just stood there- at the crossroad next to the light and gazed into her window. It had been a few weeks but she had never inquired about him. A heartlost stranger for all she knew.

She would usually look away from him, paying no heed. But today she looked at him for a while, possibly a minute, before she pulled away and shut the window.

“Mr. Sharma, I assure you, there is nothing wrong with our files. If you need, we can look again. I–” Aravind was on the phone, trying to talk-down one of their biggest clients from leaving the firm. “I assure you, Sir. If you could just come down once…”

Just then, Aaru, the errands boy knocked and put his head through the narrowly opened the door.

“Saab,” said he and held up Aravind’s lunchbox.

Aravind signaled him impatiently, while still speaking on the phone.

Aaru put the lunchbox on the side table and tipped his white cap, and left.

If there were constants in life, it was the arrival of the four-tiered yellow lunchbox. Twice a day, for twenty-seven years. And lunch was always the same. Vegetable, lentil and two bowls of rice. Constant. It was one of those things that could probably stay the same for the sake of their own existences.

What is a wife but a woman who would cook your food, do your clothes and do all the things you rather not?

Savita was now caught up in her thoughts about being a housewife. It was an underrated ‘easy way out’ for most women. Easy? I know differently.

She had been asking Aravind for a break– they hadn’t been anywhere in years. A wish that was fueled by her desire to travel into unknown lands.

We don’t even walk to the corner of the street together.

She didn’t know if it was her idealistic views about life that was instilled into her by her mother, or just despair, that made her apathetic towards trying itself. She had never even tried to argue with Aravind, for all she knew, he would just leave for work and say nothing for the rest of the week. Birthdays, anniversaries and other momentous events in their life had passed without notice.

The next morning, the same routine followed their cheerless existence.

“Do you have any openings for that holiday we talked about?” she asked.

Savita heaved a sigh and looked at Aravind; expressionless.

She and her solitude.

He and his apathy.

Aaru and his white hat.

It seemed almost as if the constants in their lives were their unsaid words, their stuck-in-a-rut life and the innocent lunchbox.

As she rinsed the soapy plates in the water, she felt the need to open the window and see if the stranger still stood at the same place. Battling her conscience and boiling frustration, she shut her eyes. And opened the window. She opened her eyes to see the man still where he was. He stared at Savita and smiled. He produced a cardboard placard from behind him. It read:

Happiness is a choice.

Aravind sat staring outside his window, watching the quiet chaos of city life from his office. Aaru came in, left the box at his table and left.

He opened the box, and as he did, he reviewed in his mind what would be there– vegetable, lentil, rice and rice. He almost considered not opening it but he did.

Opening it he knew, that it was all over.

The box opened and the first box was empty.

Vegetable, rice, lentil and a goodbye.