You are here: Home / Love and Romance / Only You 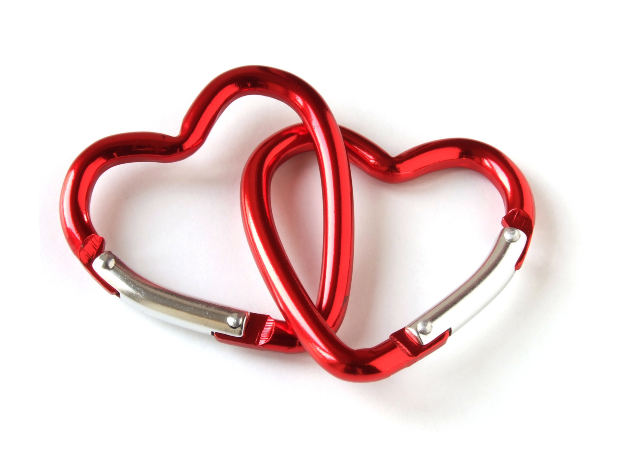 Love Short Story – Only You
Photo credit: sullivan from morguefile.com

Karthick was working in a private company.One day he gets up early in the morning and does all his regular activities.He goes to beach and sits in the warm sand and starts to thinks about his past memories. At the age of 10 he was playing in that same beach with his parents.His dad bought and gave him a chain having of pendant made of shell.On seeing that chain a girl of his age forces her dad to buy the same model of chain but her dad refuses.She worries a lot for that and leaves the place by seeing that .

A new family arrives to his apartment and he sees that same girl whom he saw in beach.Thier mom’s became so close to each other and used to go to each other home.While playing he always used to supports her but feels shy while speaking with her.Her name was Divya.

One day while returning from tuition it was raining heavily.To cover themselves from rain they both moved into a nearby coffee shop he prepares himself and develops some confidence to speak freely with her.When he was about to speak with her for first time suddenly her friends came to that shop and chatted with her for a long time.Karthick gets disappointed and he goes out in rain.

Divya’s dad buys a new house and they all went for the house warming function.Karthick was thinking that they are going to shift their house to that place which was far from their home.He felt a little for that and enquires his mom regarding it.His mom told him that they are moving to abroad and the house which they bought is left for rent.He was shocked on hearing to his mom speech and felt a lot for that.Divya was residing with her family’s in her aunt’s house for a while and was waiting for visa.He was doing his 12th standard,since his school was long from his home his dad plans to change their home and shifts near to the school as it would save time for him.

During his housewarming he goes to terrace and was sightseeing.To his surprise he sees Divya going in a scooty and he ran’s downstairs to see her but could not.He felt happy that she is in the city only and not in abroad.He joins a class for engineering college entrance exam there again surprisingly he saw Divya and spokes to her for first time.

She told that”I lost my mom in an accident and so our plan to abroad was cancelled because of this”.

He replies”don’t worry we are there”.

Their exam got over he calls her for a movie on the next day.She refuses and says”I am going for abroad so I can’t sorry da”.

They both shook hands and left.Karthick plans something to do for his futures in studies and becomes busy in his work.They both made an agreement that whatever the situation they both must be in online for an hour.Since he was busy he didn’t turned up in online.She always waited for him.

After some days he was standing in line for admission in a line for doing his PG course.He saw Divya there.When he went to speak with her she refuses to see him.He realises his mistake.(Days pass on)It was cultural time in his college.Divya was sitting as an audience in that hall.Karthick tries to convince her and sings a song about her on the stage.He attracted her a lot on singing.She feels shy on hearing to it and starts to speak with him.

She says him that “you are looking like a hero right now..amazing performance!!gud job,why did you not spoke to me for 4 years,you broke our friendship but somehow managed now by singing,you impressed me a lot”.

Karthick was in cloud nine on that moment.On the same day at night she makes a phone call to him and asks him to come to her house street corner.He asks for reason but she told him that it’s a suprise.He was standing at that corner she came in a new car and told him that the car was her dad’s gift.She asks him to drive to the beach.He drove and reached the destiny.While getting out of car she suddenly proposed him without replying her he smooches her and told”I too have fallen in love with you” and asks the reason“why you asked me to drove the car to beach?”.

When they got down all her friends was there.It was Divya’s birthday.She bought him to beach surprisingly.He feels bad that how did he forget about her birthday and told“before itself you would have told me na,I had nothing to give to you right now”.She replied him that”that’s  what you gave me a lot in car”(laughs).He presents her a chain having pendant shell before which he bought on that same beach and she says to all her friends that I am going to marry him shortly.

Karthick gets a job.Divya compulses him to marry her soon.Karthick refuses and says that my brother must get married first.

(big quarrel takes place between them).She finally says lets break up.He tries to convince her.She cries and leaves the place.Next day he goes to beach and thinks about his past and was planning about his future.He goes to her house and saw the doors locked.He contacts her friend and finally gets an update that she is in her friend’s birthday party.He rushes to that place and asks his friend”why did you not informed me that its’ your birthday?” and says to one of his friend that his brother was in love with a girl they are going to get married in few months and gives invitation to all his friends and also gives to Divya.She gets it but did not showed any interest on reading it.She was in hanger with him.Divya thought it was Karthick’s  marriage and mistook him that he did not liked her.

They all went to their marriage.Divya was crying a lot and was saying to her friend”I am going to miss him a lot don’t know what to do,I thought this problem would have been solved soon.”

Their friends did not told that it was supposed to be his brother’s marriage.She cries and sits on a chair,on stage she saw Karthick’s brother in groom dress.On seeing this she enquires her friends that“didn’t his brother not married so far!!”.

They all told her that”No,today is only his marriage and it’s not Karthick’s.We didn’t like to say anything to you because you must realise your love on him,go and speak with him”.

All his friends asks Karthick to speak with her.He wents close to her she suddenly hugged him and say’s”I missed you a lot,I made a big mistak,cant live without you”.

He too asks apologise to her.They both again started to speak with each other.He gets his first salary and gives to his mom.His mom says”I don’t need this please save it for your future but be careful while you inverse in anything”.He calls Divya and asks her to come for dinner.She accepts his request and went to dinner she congrats him and says you are looking handsome tonight(some romantic conversation takes place)He says”its time for us to marry and says I have surprise for you tomorrow”.She was waiting for it.

Next day he stands at her street end and calls her to come.She comes and sees him standing with a new bike.He invites her for a ride but she refuses and says him“not now later we will go,don’t mistake me”.

He says bye and leaves the place.He brings Divya to his home and gives intro to his family.In his home all were happy on seeing her.He goes to Divya’s home and introduces himself to her dad at that time Divya was not there in home.She enters her home suddenly and saw him in her house.She was puzzled and doesn’t know what to do.Her dad refuses to their love(he leaves the place)

She makes a phone call and asks”why did you came to my home without informing me,sorry for my dad’s words”,he replied “sorry it was my mistake,I was planning to have surprise for you but did not thought that your dad will say like that”.

She asks”let’s go some were out tomorrow”

he accepts.As usually he was standing at the street end and they went for a long ride they were having some interesting conversation with each other.They both were planning about acceptance of her dad for their marriage.Suddenly a dog came over the road he drove the bike on that dog without noticing it a big accident took place.He was bleeding a lot,she did not turned or looked at him as she was in unconscious.He was trying to lift her but couldn’t as he was also injured and falls down.With the help of public they both were admitted in the hospital.He survived,she was in a critical condition.He goes to see her and saw her dad who was standing next to her.

Her dad did not opened the mouth and saw the affection and care of him on her as he was holding her hands and was crying.Her dad says to him that “my daughter is for you,I accept for the marriage don’t worry she will get well soon”.He goes  close to her ears and says her your dad accepted for our marriage come on don’t give up.After few seconds she slowly opened her eyes and saw him.They all felt so happy and  he says her“don’t worry I am there for you and I won’t let you at any cause or at any situation”.On seeing her dad she smiles and survives.