You are here: Home / Love and Romance / The recurring nightmare 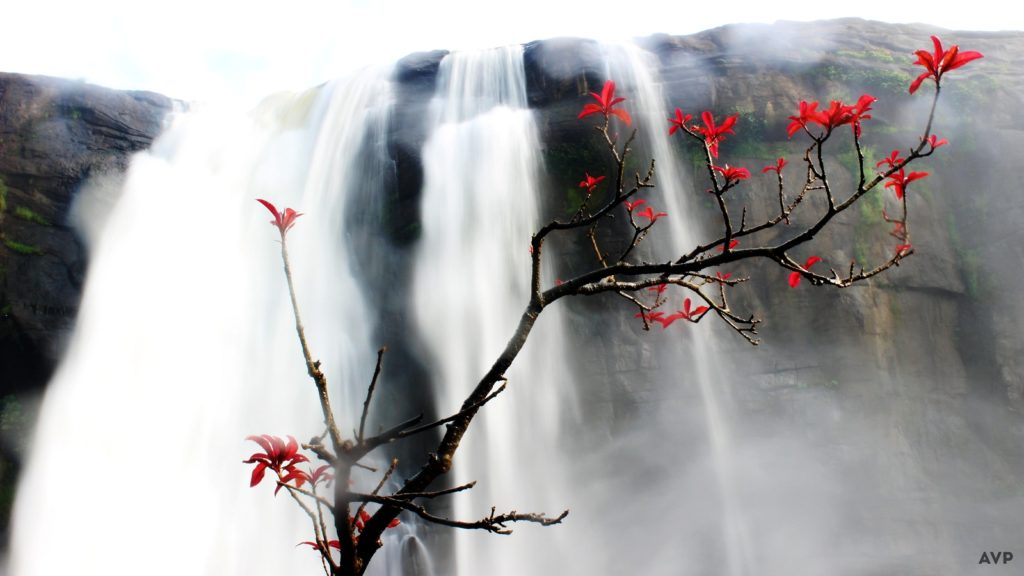 The nightmare again. He was falling from great heights. He could feel the pain in his head from the fall. It was so real. The room was dark. He tried to check the time on his watch. Two-fifteen in the morning. ‘Are you fu##ing kidding me?’ He thought. But the dream that he had, it was haunting. His heart was beating fast and he was breathing heavy.

He sat on the bed trying to figure out what he should do with the time. He was furious that he had lost his sleep. He couldn’t sleep anymore, not after that terrible dream. ‘Why is it so necessary that the person who is an acrophobic should dream about falling from heights’, he thought. ‘But Laya, she likes to go trekking. Her dream is to climb the Mount Everest with me and scream from the top. What kind of fantasy is that? A person who likes to dream about climbing mountains loves the person who is afraid of falling from heights. We are different. How do I fall for a girl who is completely different from me?’ he thought. ‘Maybe because the physics teacher was right. The opposites attract.’

The thoughts of her made him feel fresh. He decided to continue the novel that he had been working on, right after college, for the past six months. He was aiming to finish the novel before 30th August, his 24th birthday. ‘Seventeen more days.’ He thought. He walked in the dark and searched for the switch. He finally found it after many failed attempts.

His eyes took some time to cope with the sudden light. The room felt different. The walls which were painted green are now painted sky blue. Fancy imitations of Guernica, The starry night and The Kiss are hanging on the wall. ‘Laya would have enjoyed this.’ He thought. ‘She loves the painting, not the perfection.’ He was totally confused. The table which used to be on the right side of the door was not there anymore. The drawers, where he used to keep his favorite books were not in the room. Even the bed that he had been sleeping in was different. ‘How did it change over night?’ He felt confused. He slowly walked towards his bed. There was a woman lying in the bed. She was naked. He felt a sudden shiver.

She wasn’t moving. He walked towards her, trembling. She doesn’t look more than forty, maybe in her late thirties or early forties. He felt her body was shining in the light. ‘Is she an angel, a goddess or something like that?’ He thought. He moved closed. She was breathing. He gently touched her. “Hey.” No response. ‘She is in deep sleep.’ He thought. He was nervous and the heart was pounding faster. “Hey.” He called again, louder, literally shaking her.

The woman got up suddenly. But she was not nervous. She didn’t try hiding her naked body either. He was still scared and was still shivering. She got up, still naked and slowly walked towards him. He saw her face clearly. She looked like Laya, but older. She had wrinkles on her face. But she was beautiful. “Don’t worry. It is ok.” He recognized her voice. ‘What the hell is going on?’ He was even more scared. He pulled her away and looked at her. ‘Yes, it is Laya.’

She came closer to him and tried to hug him again. But he moved away. “It is ok. There is nothing to be scared of. It’s me Laya.” He did not believe her. He had even met her yesterday. She is just twenty-two. And this woman looks older. He turned away from her. He was shocked to see his reflection in the mirror.

A scar on his bald head. He started screaming. She ran towards him and hugged him. He moved her fingers through his head to make him calm. “Don’t be scared Adarsh. It is just another day. It had been the same for the last twenty-two years. You will scream watching your reflection in the mirror. You will shiver seeing me in the bed.” She looked at him. He was still looking in the mirror. She continued. “Twenty-two years before, 12th of August 1994 exactly, you won’t remember anything after that. The new memory formed in your brain can’t stay there for more that twenty-four hours. It’s 13th of August 1994 next day again.” He was looking at her in disbelief. She continued. “We will talk like this every day in the morning. It had become a routine in our life.”

He took her hand and kissed it. His eyes were wet. “How did?” He was not able to complete. She doesn’t need words to know what he meant. “An accident. You fell from a building. Doctors said that it is a miracle that you are alive.” She said kissing his hands.

“Why did you? You should have.” She didn’t allow him to complete. “I should have married someone else? I should have lived happily?” She smiled and continued. “I am the happiest woman in the world. I never felt like wasting my life. I am happy that I am living with the one I love. And the one I love loves me more than everything else in the world. You love me with the same energy and innocence of a twenty-three-year-old. Our life is not strange. It’s thrilling. I chose you because I love you. Because we have decided to be together even if the god is against us. Because I can’t be happy with anyone else.” She smiled, but her eyes were wet.

He kissed her. Tears started flowing from his eyes, but it was the tears of joy. Now he needs some time alone. It has become a routine for the last twenty-two years. She covered her body with the blanket. She kissed him again and said. “I will make some tea.” She walked towards the kitchen.

‘He likes his tea strong. A little sugar and less milk.’ She knew everything about him. It took her some time to adjust with the strong tea. But she never felt tired of his recurring days. She loved him deeply. She poured the tea in two cups. She took the cups and walked towards the room. She loved to drink the tea lying on his shoulders. She walked past the dining hall and the hall towards the bedroom. She wanted to be with him. She walked as fast as she could. She passed the door. He was not there. She was shocked. It has never happened before. She walked inside the room. Some one suddenly grabbed her from behind. The cups fell to the ground and broke into pieces. He started kissing her all over. She started enjoying the moment. She was the happiest woman in the world.