You are here: Home / Love and Romance / Soulmates 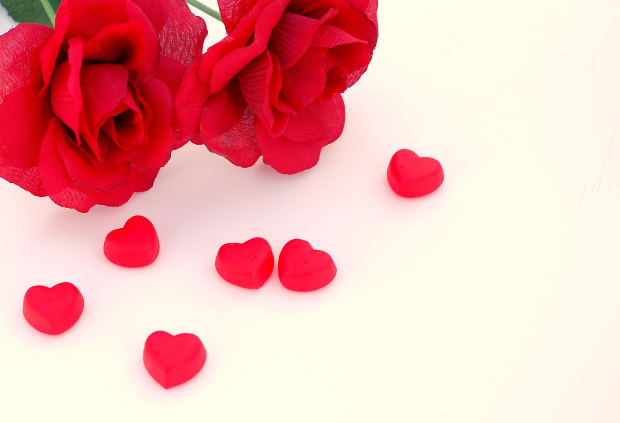 The scenery with love is always beautiful. But just because love is beautiful does not mean it is always happy.

Three months of love took away three years of Ian’s freedom, trust, belief in god and his beloved. Three months of bliss has given him afterlife of hell. Ian’s life seemed to be cursed whereas Jem Adriana was cursed to be blesses. If one could surely speak up anything was tat god is unfair, why is the good people that suffer after all?

Three years back, life was perfect. These new couple Ian and Jem had never known that the world when you are in love is no less than paradise., but good fortune always comes with a price, but the price that Ian had to give was too much. It was unfair, how could three months of love take away his everything? But even if he was to suffer 3 stages of hell on earth, he would not give up on Jem, not for once. He’d rather choose to be Satan’s slave than live a life without Jem. He’d rather choose to lose his life than not see Jem’s face when he woke up at his bedside. Maybe destiny awaited them long before they met. Maybe this was what people call, soulmates.

“Jem you have to sleep. You’ll get worse if you don’t. Come here sweetheart, you don’t need to be scared, it’s just me.”

It was past 1 o’clock in the morning. I had not gone to sleep. Ian had been waiting for me to come to sleep at my own will but since it was getting too late he had started coaxing me to go to sleep with his soothing voice, this voice was the only voice in the world which made me feel secure. I had been siting near the closet since 9 pm. I was fiddling with my nails, my hair, whatever came across my hand. My lower lip was almost going to bleed since I had been chewing on it so hard.

“Dear, let it go. For now please come to bed. For me.” Ian continued to sooth me. I was now staring at my nails, Ian had cut it this afternoon after bath. These short nails felt funny, I neither could scratch nor pluck anything. I started narrowing my eyes at it when I felt a warm hand take hold of my cold arms. I sat still and shut my eyes. “Please, you need to sleep, Jem.”

Whenever someone touched me, I felt like they were going to stab me. I would think that something bad would happen and my body would ache so much. Because of Ian’s warm hand I realized how cold my body was, so I slowly crawled to bed. I could see from the corner of my eye that Ian was smiling but did not utter a word. He knew I did not like to give satisfaction to anyone that I was doing as they told. I pulled my leg up on the bed, I immediately felt a warm blanket cover me up. I knew it was him. Why is he so kind to me?

The morning sun had entered our room. I slowly opened my eyes and turned towards the right. Ian was looking at me and I could see that he had already made breakfast for me which was lying on a table nearby. He smiled at me. Such a warm smile. That same smile which was full with so much hope. He had hope of me coming back. Didn’t he feel frustrated to wake up every morning with a faint hope that maybe today I’ll improve and to know that I was never coming back, to take a look at me and realize that his Jem was gone? Lost forever! Even after knowing this entire scenario how could he smile at me? From where does he get so much hope?

I was staring blankly and I had been drooling over my pillow.

“Dear, do you want to get up?” Ian asked me comfortingly, making sure he did not scare me out of the blue. That same soothing voice filled with so much love and warmth. From where does all this love come from to Ian? I could see him crawl next to me and wipe my mouth and he settled my hair. He then kissed my forehead and asked with a smile, “How are you today?” he then gently lifted me up. As his hands came in contact with me, I did not move muscle. I stared blankly with my head low as I breathe heavily.

“Forgive me for that, Jem. I will not scare you. Shall we have some breakfast?”

I calmed my breathing. The huge mirror across the room reflected how messy I was. The girl in the mirror was hopeless. She did not have anything left. The eyes reflected so much pain and agony. Crying to get out of this suffering. She wanted to be the same happy, cheerful Jem of three years back. She wished death every moment but she wanted to live. There were so many regrets that filled her face and so much pain. I was now crying but I felt nothing.

“Jem what is it? What is the matter?” that concerned voice broke my isolation. I had forgotten I was not alone in this room, only physically though. For me, no one existed around me, they meant nothing. Life had no meaning with me, I was next to nothing.

Ian was concerned, he wanted to know what was causing me to cry but how could I tell him when I myself did not know the reason why. I was just a living doll who was plain white, who had lost track of life and to add up, speaking any word from my mouth irritated me. Ian had been with me for long to know all of his questions would remain unanswered. Why is it he could not just give up? What am I to him? Does he know that I feel nothing, that I have forgotten him, forgotten who he was, forgotten what he meant to me?

It was noon. I was sitting on the cold floor of the kitchen near the refrigerator with my knees’ pulled up to my chin when Ian found me. He was concerned as ever. I knew he was scared, I felt it but he never showed it openly. He came close to me while keeping enough distance and making sure he did not make any contact. He has a plate full of brown bread, a sandwich it was. He knew his was the best I agreed to eat. He held the sandwich next to my mouth and waited for me open my mouth. I resisted for some time but I knew he would keep holding it unless I took it, even if it meant holding for an hour. My body felt heavy so I took it from him. “That’s my girl,” he said warmly.

The doctor came in again to take a look at me. His face “Jem” was lost unlike Ian because he was a doctor, not Ian.

I continued to remain silent and stare blankly while the doctor did his duty. This has continued for 3 years. After finishing with me, he spoke to Ian. Ian glanced at me and then back to the doctor. They walked out into the hallway. Ian left the door half-closed as he went.

I could hear the faint murmuring that managed to pass all the way to my ears but I did not pay any heed to it, suddenly, my attention was broken with a sudden raise in the voices.

“What is with you doctor?” Ian’s voice rose. “How many times, how many times are you going to tell me to give up on Jem? How can you tell me to let her go with such a calm face?”

“You need to be practical. Not a fool dwelling in illusions. You are a wise man and you are wiser enough to know this.”

“If believing in Jem is an illusion. If being in love with her makes me a fool. I am that fool who dwells with illusions.”

“Can’t you see how much Jem needs me? Everyone is the same. Everyone has let her go without even trying. They don’t have the courage to hold on to her. But I am not them, she is all I have. She is my life and I am all that she has left.”

Silence followed. The main door creaked open and closed back. I was holding myself tightly as I saw my reflection in the mirror, I could see the fear that surrounded me.

Ian walked in with his head low. For once, once in three years after being affected by depression I did something on my own. Though I was freaked out I tried my best to look calm. I slipped into the blanket and closed my eyes. Maybe today was special. I heard the bed creak as Ian climbed on carefully. I could sense him looking at me. I continued to keep my eyes closed though I was having a hard time controlling my anxiety. Did I just hear a cry? I slowly opened my eyes. Ian was sitting up. His face covered with his hands. I could see him biting his lip. He shook his head sobbed silently. He then ran his hands up his hair and tried to control his breath. I closed my eyes back. After few moments he gently kissed my forehead and whispered softly, “Jem, I shall always be there for you.”

My severe headache woke me up. It was still nightfall. My breathing quickened and my body felt like it was being twisted. It ached very badly and I was suffocating. My head was thumping hard. I looked to my right and I could see Ian sleeping. His presence made me feel so safe. His face calmed me even though my heart felt like it was being pierced.

The pain increased. I tried to shout but my voice did not come out. I tried to move with this aching body. I wanted him to wake up and sooth me and tell everything would be fine. For once, I wanted him to look at me. I wanted to see his smile desperately. I lost my strength, I was drained out. The only thing that seems to be awake was my mind. My eyes felt very heavy. My breathing stopped. My eyes were closing, his face was being covered by darkness, he blurred out and with the last strength that I could gather up, as my eyes closed and he was beyond my vision, I tried to reach out to him and whispered weakly, “I…an…” and then my life came to a halt. The pain was no longer there. I had left forever.

Everything around me is so warm. There is light everywhere. I feel no emotions at all. I feel that finally I am at peace. There is no sound. This is the safest I have ever felt. I have no desire, no regret, no sadness nor pain. I just feel so at peace. Finally, I decide to open my eyes and there, I see him. I see Ian standing there. That same smile, that same warmth. We are surrounded with nothing and I see him there, standing and looking at me.

“So you managed to follow me up till here?” I ask and a smile escapes my lips.

“Hell or heaven, nothing can part us away,” he replies smilingly.

“Yes. Forever and always.” I hug him. He is so warm and he makes me feel the greatest. I had missed this love in the past three years. And then I tell him, “I have to tell you something.”

I let out a deep breath, look into his eyes and say,