You are here: Home / Love and Romance / Sunset 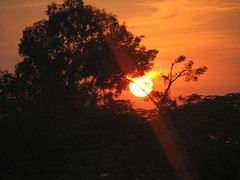 I was staring into nothing.

The breeze kissed my face and I felt at peace. I was far away from home and I felt at peace, finally. The chaos at home was driving me insane, and I could not recall any day I did not feel frustrated and angry. Her behaviour was erratic and at times, it was as if I did not even know who she was anymore. She would get angry, throw things at me, cry and then hide in a corner. Some days she would speak things I did not know she had the knowledge of. But I finally know that I don’t know who she is. I thought she was the woman I loved, but maybe I was just dreaming things.

It all started a few months ago, when I was piled underneath work that I began to feel the distances between us widen themselves. We stopped talking about our feelings, and our marriage began to fall through the cracks within our own lives. And the fights and arguments, and the feelings of loneliness blended themselves into our everyday. All communication between us dissolved and there were days when I only saw myself leaving.

Sometimes I sat in my car as I drove in, just so I could prepare myself for what was to come. I was afraid I might say something to hurt her and cause her more pain, because I would never know what she felt within. I could sometimes hear the thump of my anxious heart as I sat in the silent garage, mustering courage to step inside our house.

I entered the house, tired.

The house looked tragic, with everything lying here and there. The floor was a mess, just like the kitchen and the rest of the house. Even as I walked across the hall, my feet hit things on the ground. I started to pick up one by one. I resisted the urge to go into the bedroom, knowing very well that I might be greeted with a chair to my face.

I was clearing up the last of the living room mess when I came across a piece of paper. It read:

‘Oh Lord, I think I am falling in love with him! Carl is such a great guy! ‘

I was confused what it might have meant. But then again, I knew nothing nowadays.

I was awoken by soft nudging.
“Hey, are you okay?” she asked me. It was most unusual of her to ask of my well being, given the state of our relations.
“I’m okay,” said I.
“What happened to the house? Who did this? It’s a mess,” she inquired, looking around the house.
“What do you mean? You…,” I was confused, but I didn’t ask any further, as I saw anger slowly colouring her face.

“Are you alright?” I asked her as she shut her eyes in pain.
“I just have a headache,” she replied.

She came and sat next to me and allowed me to cradle her head in my arms.

In the moment between one argument and the next, we sometimes found a common ground to rationally decide where our marriage went. And these moments soon began to lengthen. Things felt normal enough. I would return home later than usual due to the workload, but to no noise or flying pans. It had been a week since our last argument, and I felt happy to go home early for a change, for the first time in a while.

I came home and I found her in the bedroom.
“Sweetie, I’m home,” said I. She had her back towards me and jumped when she heard my voice.
“What?! What are you doing here?!” she said.
“I don’t understand, it’s me, dear.”
She cheeks were red, as if they blushed.
“Honey, it’s me, Carl.”

She scurried out of the room and shut herself in the bathroom, where she stayed for the rest of the night. And when she emerged the next day, she had no idea why she was sleeping in the bathtub.
“Are you okay, dear?” I asked, deeply concerned.
“Why wouldn’t I be? Why do you always have to victimize me? Don’t you think I know what you are doing?” she replied angrily.
I sat confused.
“I see exactly what you are trying to do. You are trying to make me seem like I am crazy just so you can rid yourself of me!”
“It’s not that, dear.”
“You want to kill me! You want to kill me!”

The doctor was speaking to me in a very sympathetic tone. He said that Mel had a tumor in her frontal-lobe, which gave her ‘multiple personalities’ in a sort of way. They were going to operate soon. But I could not feel anything. It was immoral, but I felt like I could continue no further. My mind was exhausted with her routines. And I felt helpless.

I left her in the hospital, abandoning her in a sort of way, and drove home to clear out my things. I was taking my clothes from the wardrobe when a note fell out from amidst the stacks of clothes.

‘There are voices in my head. I think I love Carl. He seems like a great guy but I don’t know if he’s going to like me or not.‘

I was surprised by the way she wrote notes in third-person, as if she was writing a diary to herself. And the frequency of my name. I went about the house, and came across tens of notes, all about me. They were here and there, in places I was bound to find them, but I never did. Because I never looked. Almost as if she knew that I had to find them.

‘Southsfield Park, November ’97: That was the first time I told you that I loved you. We were only six years old. ‘

I found more in the garden outside.

‘He is charming than ever. But last night he came home very late. Although I was awake, I pretended to be asleep. I hope he talks to me about his feelings.’

‘I don’t know why you just leave. I’m here to listen.’

‘If only love were enough for you, you selfish bas*ard.’

I returned to bedroom, with my half-filled farewell suitcase and clothes strewn across the floor. I began to put them back when I found a small black box. And the memories came back, flushing my mind with the night that I asked her to marry me. I opened the box to find another note.

‘I know things haven’t been any better than before, but I must tell you that I love you, Carl. I must. Because my words aren’t my own sometimes. ‘

My eyes were filled with tears as I rushed to the hospital. With every second I hoped I got there before the operation began. I felt guilty of even having thought of leaving.

I reached, although late, I arrived to the news that the surgery was going well. I sat there in the waiting room, hoping for the best. I wasn’t going anywhere now. Because I’d found my reasons to stay.

I was later explained that the variation of her narratives and her erratic behavior was all because of the tumor, which caused her to have lucid intervals. The doctor said that she was lucid before sunset. After which her mind switched between personalities.

I was now watching her through the glass doors of the recovery room. She would awake any time now and I slowly entered her cold room. I found her to be awake when I came in. She was staring at the ceiling.

“I’m not sure how I got here,” she said, continuously staring at the white ceiling.
“You got sick, honey,” I replied, taking her hand in mine.
She tried to get up but I disallowed her to do so.
“What happened?” she asked.
“Nothing you should be worried about. It’s over now.”
She was quiet for a while.
“Do you love me, Carl?”
“Of course I do. Mel, do you love me?”
I felt her face remain as it was, as the orange rays of sunset filled her room. My faith was shaking as the rays fell upon my face through the window.

The moment of truth.

“Do you love me?” I asked her.
“I love you, Carl. I loved you even when my mind was a mess of a million voices. I loved you, more than I have ever loved you before. Even if my body is owned by someone else entirely, I will still love you. Only you.”