You are here: Home / Love and Romance / The Date 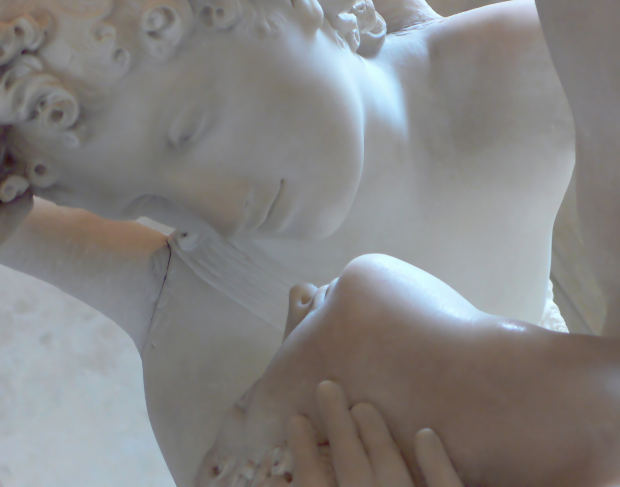 He locked eyes with her. She beats him every time. But this time annoyance was pushing him to win this stare game. He was waiting for a reply, she gave no sign of response. It’s been an hour and impatience was taking a toll on him. His watch rang the cuckoo tune. When would she be a little more confident?

Placing himself on the sofa, Rahul frowned angrily. The last time he threw this question she had evaded it smartly. Why is it so difficult for her even after eight years? The night was growing darker. The CFL’s kept the setting alive for an answer.

‘And what am I supposed to deduce of this suffocating silence of yours?’ asked Rahul sternly. Restricting his desperation to a question, Rahul gave his ear to her yet again.

No echo was heard in the hall. She shot a blank look. She didn’t have an answer to deliver. Perhaps, it was happening the first time. Rather, she was the one who always had a response for everything. Jatin used to term her as a ‘loudmouth’, only to be rebutted by Rahul. Even her heavy breathes seemed inaudible today. The urge to burst out wasn’t evident today in her. Closing his fists in fury, he summoned adamancy.

The door bell interrupted them. Opening the wooden door to the postman, Rahul served him his sign hastily. A single letter wasn’t important today, but a few letters. Throwing it in one of the corners of the dining table he made his way back to the bedroom. She still sat there expressionlessly. He had given her time to think. And she hadn’t used it wisely. Not that he would let it go so easily.

The cooker cooed irritably loud. The dal called him back. Stomping reluctantly to the kitchen, he poured it to his favorite glass vessel. He had always considered kitchen chores to be a woman’s inheritance. But she had proved him wrong years ago. Recollecting his vigor in seeking the word, Rahul returned to her. Unleashing a sigh she sat there like a sheep led to slaughter. Her immaturity towards their inexplicably divine relationship grazed his emotions. The standstill added to his work fatigue. His bosses were bearable, but not the doubt in her heart.

The conviction which you restore within me camouflages the products of insecurities, she had once said. Today, even his relieving eyes proved inadequate to her. Hysterical about her unfamiliar behavior, Rahul sat beside her for the first time in the night. The closeness of their breathes drowned him in the silence. She was evidently muttering something. He could hear her. Yet his ears weren’t sent closer to inspect.

He was arrested by the calendar on the desk. 24th August, it read. Switching himself to rewind mode Rahul smirked at their past which faded into this day. Her reply then was a kiss. She assured him of love, he jumped ecstasy. They were just twenty one then; rather he was short of a few months. The aroma her beauty spread across the park gave him strength enough to confess the deepest feeling he had ever had. She was the one, he realized it then. She has always been the one, he reiterates to himself now.

Matrimony was a gift he was kept away from all these years. Plunging his pockets to put an end to the incessant calls which trenched the air of indecision, he placed his phone beside his ear.

‘You still wake? Are you with her?’ came a concerned voice.

‘Why have you called at such late an hour?’ asked Rahul furiously. His mother’s query was not one which needed to be reciprocated. It was one which was meant to activate a talk.

‘You’d manage it alone, won’t you son? Do I need to come?’ inquired his mom caringly.

She has done it before. And she was committing the same mistake again. Stop intruding in our matters, Rahul wanted to yell.

‘We are fine, I’d all you in the morning’, said Rahul convincingly. His brief assurance wasn’t incentive to his mother. Rahul wasn’t willing to talk to anyone now. It was her and her alone.

‘But for how long will —-the phone went dead again. Assembling his wits Rahul oscillated back to the interrupted conversation. He had decided the date. 24th sounded cool. The jyotish can be called to clarify. He wanted it to be a sober ceremony. His maternal uncle, Rau, will not be invited.

‘Don’t you have your meeting tomorrow?’ she finally spoke. The obscurity of his emotions grabbed him by his throat.

‘Do you love me?’ asked Rahul plainly. He had to act heedless of her diversion. Few more minutes slipped past his question and silence cried dominance. So, you don’t?

‘We have the whole night girl. Tell me what is it that is pestering you? Have I diminished in you?’ asked Rahul stoically. The chillness the air-conditioner spread choked him. Even its remote wasn’t to be seen.

The bruises the accident gave her face had lost itself with time. Laying his head on the cushion, he sighed exhaustively. He was cold, not of the weather, but of her cruelty in depriving him of a confession. She had promised to leave everything behind. Then why was she hesitant now.

The vision became clearer as he opened his eyes further. The bed had got untidy. He had slept when he didn’t want to. His body had lost to his stubbornness. Surveying his bed, he found her sitting calmly in the same corner he had left her last night. She sat there glaring at him delightfully. The answer, he reminded himself. Dragging his tired body towards her, Rahul held her by his arms. She smiled even more.

‘Wait, I’ll bring you coffee’, Rahul said to her as he headed to the kitchen. He never liked coffee, but that never stopped him from making it for her. Now where has the coffee powder gone?

Switching off the lamp which apparently shone at her pretty face he placed the cup of coffee on the table. Now is the perfect moment, he thought. His alarm rang 7.00 am. He had to dress up, but only after the word.

‘Darling, why do you think I would say a no? Isn’t my presence enough evidence to assure you of my love?’ he heard her say blatantly.

He hugged her. He kissed her. And then kept her back on the table. The frame was coming out. She clicked it on a 24th. That yellow suit made her look fabulous. The photograph made her look eight years younger to him.

The 24th had gone, Rahul back to work. He looked at her yet again, she smiled like always. The door was shut behind her.