You are here: Home / Love and Romance / Love will find you 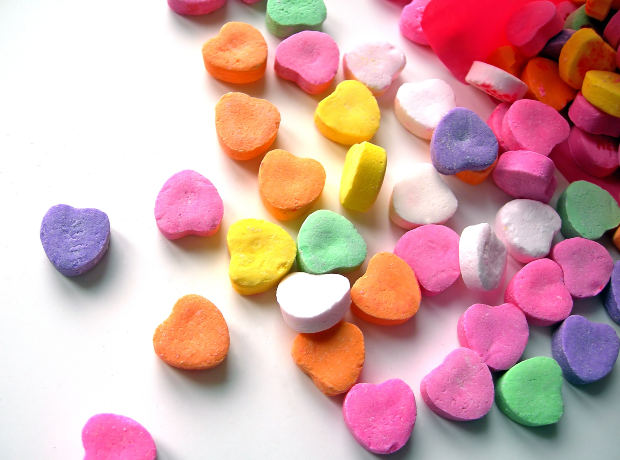 I was an intern at the aviva life insurance company. 2 days before the internship program someone told me that our boss was spreading rumors about me to be interested in him. I got really annoyed and wanted to change the company. I asked my friend who was an intern at hdfc to get me placed there. she asked me to come for the interview. On my first day of internship at aviva, I somehow managed to stay in the lecture room where our initial classes about insurance and related matters were taken. I, not even once looked at the boss. Immediately after the class was over, I rushed for my interview at hdfc. It was good and I had been given the job letter. The problem popped when I had to take permission from aviva boss to change the company. I called him, told him everything, but he didn’t allow me. I got so frustrated that I talked to him about the rumors too. He got surprised (or acted to be so) and cleared everything  with me and insisted me to be in aviva only saying that I’m an asset to the branch (as I was the winner of a pre-internship contest where I recommended 112 people as interns). The major turnoff at being here was that I knew nobody and those I knew, I didn’t like.

The biggest issue was to sell the insurance. Now that was something pathetic as I had to listen to a No from everyone I approached to. It broke my heart n morale everytime. I managed to complete the target upto Rs. 40,000. This was my limit now. Those days, the boss announced a 4 days manali trip for those who completed the target of atleast Rs.80,000. Although I was nowhere even close to the amount, still he allowed me for the trip by just paying Rs.4000 more ( don’t know how did he count that). My father, who never allowed me for any local trip, allowed me for manali. It was a BIG shock for me.

We were a group of 10 people (boss included). On 25th of july we headed towards manali. I was still in happy shock like I’m living some dream. It was late at night when our boss called everone at the back seats to play truth or dare. That was a true fun. It was the time when I noticed a guy. He was cute. I just knew his name before. A few minutes later we started to converse.  He was the only one in the bus who had the song “I love you” when I wanted to listen to it. I happened to be the only one to laugh at his double meaning jokes.

We reached the hotel next afternoon. After an hour of rest we had to leave for lunch and mal road. We were walking when that guy came to me and gave me a piece of a bottle crimp. I smiled. I wore it. it fitted in my 2 fingers. He looked at my fingers and said “Delhi ja ke dusri le lio, magar feelings to wahi rehengi.”

I giggled. I didn’t try to understand what and why he said. At the night after dinner, he was the one to make my drinks. The other two days, he was with me everywhere I was. During the lunch, dinner, malani club, at rohtang. Everywhere I was I found him with me. People had doubts about us, even I had some. I could sense that he has started to like me, more when a friend said “poore trip pe ye naraaz ho rai hai aur wo mana raha hai”,but I was unsure of myself. It was our last night in the hotel. I asked him to follow me to the garden. We were drunk a little and so a little dizzy.

We were sitting on a swing, both on each corner. Silence. It started to rain and we saw all the lights getting off. A pure romantic situation. I took out my phone and saw him a photo. “It’s my boyfriend” I told him. I told him how badly he is treating me and how much I want to get rid of him. I shared all my pain with him and shared how much of a stress reliever is this trip for me. He was listening to me patiently. After a few minutes he told me about his ex, how and when they broke up and I was the only one who knows about this now. He also told that even he wanted to shift to another company as he had no friends here, just like me. Destiny wanted us to meet.

God knows why these topics were discussed and we shared so much. We talked, we were silent, then started to look each other and then the sky, it was 5.30 in the morning by now. The rain stopped. We decided to get back to our rooms. Before going to sleep, he asked my for a side hug.

The next morning I took him to the mall road to buy something for our families. The bus was waiting for us as we were getting back to Delhi. The whole time we were together seeing everyone looking at us and murmuring. Most of the time we were silent. We were almost in town when he asked for my number. Just a 30 minutes distance. “kaash is bus ke tyres kharab ho jaye to thodi aur der ho jaye”, he said. I could see it in his eyes how he doesn’t want us to separate. We were at our spot, our families waiting for us. We separated.

The next day my best friend called me to know about the trip. “I think mujhe pyaar ho gayaaaaaa”, was what I could just tell her that moment. he was in continuous touch with me over the phone and meetings.

Later I managed to break up with my ex and got free of all the pain I was going through. The guy proposed to me at the day of my parents’ anniversary at the hotel we were for dinner. He called me outside & giving a pink CRIMP he said “i love you“.  It’s been almost a year now we are together. May god bless us.

one day, no matter wherever you are and whatever you do..to give a life new, LOVE WILL FIND YOU !