You are here: Home / Love and Romance / The stranger 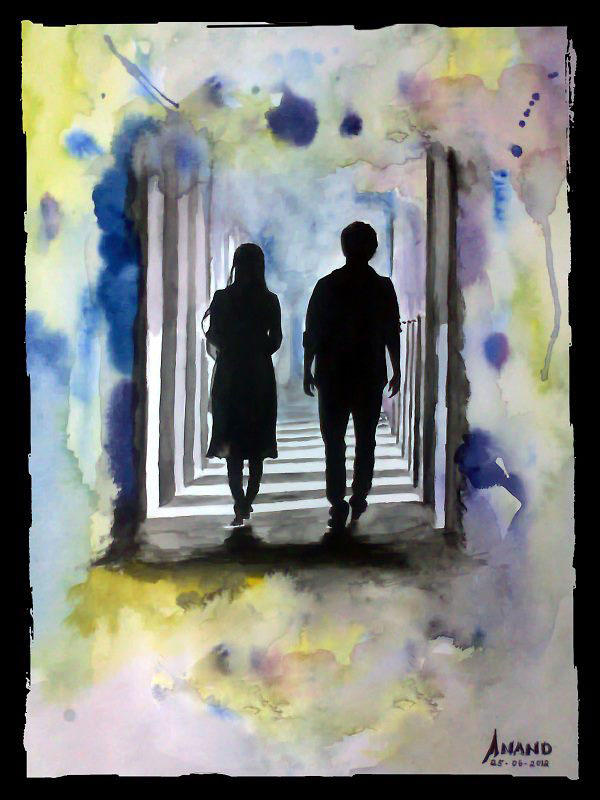 The flight was late by an hour or so.

Vani, as her friends called her, short for Vanitha, sat at the lounge flipping through the pages of a magazine savoring the quality time spent all by herself, taking fleeting glances at the myriad of passengers all around, a visual appetizer , one can say. She felt like a tiny speck in that vast ocean of humanity.

Vani always preferred simplicity in life and her vibrant, resonant, helpful nature always won her some brownie points among her friends. She could never be idle, without any activity and that always kept her sharp and energetic. Sleep had eluded her for a long time the night before. While she preferred her moments of silence, the noises around assailed her ears and it was almost getting exasperating. It was as if she was castigated for no fault of hers.

Suddenly, a tall, dark and lanky gentleman came, smiled and seated himself beside her. Her comfort level was reduced to a great extent but being a teacher for some part of her life had instilled exemplary patience and restraint in her. The gentleman seemed too restless and was frantically searching for something in his briefcase. He heaved a sigh of relief on seeing the tiny biscuit packet popping out. Vani was a bit perplexed but amused ,too, at the same time. The grin on her face seemed to have caught his attention.

“Would you like to have some, Ma’am ?” saying, he extended the packet towards her.

“No thanks…You seem to be too hungry and the packet is too small to be shared “ smiled Vani.

The man had a hearty laugh on hearing Vani’s no nonsense reply. After a pregnant pause, he continued,

“I’m on my way to Kolkata for a seminar. The late flight has put my entire plan out of gear. I had allowed myself some time to visit Darjeeling before the seminar. Now, I think I may have to reschedule it.”

As the conversation had already begun, Vani had no other option but to continue it.

“ I m also on my way to Darjeeling. As you said, this late flight has disturbed my schedule ,too. Can’t help it, you see “

Vani made it a point to keep her conversation short and crisp but braced herself for some more questionnaire. She saw the gentleman ,too busy with the biscuits. He emptied the packet, looked sheepishly at her, and continued with charged energy,

“The morning was too hectic and I had to skip my breakfast. I hope you understand. “

“Oh yes, that’s absolutely fine “ conceded Vani, and continued with her reading, giving the conversation some time to settle .

There were continuous announcements about the  delay and the deafening chaos was permeating .

“ Such things really get on the nerves” murmured Vani to herself.

“I beg your pardon, did you say something “asked the gentleman.

“ I’m sorry. The delay has put me on tenterhooks. I ‘ve a gut feeling that nothing is going to be right today. I have a wedding to attend at Darjeeling and I cannot let go of it at any cost.”

The gentleman was taken aback by surprise. Reading his expressions ,Vani continued,

“Wedding in places like Darjeeling are a family affair , a sort of get together and the absence of any person is very conspicuous.”

The gentleman was quite intrigued,

“ I ,too am headed for a wedding at Darjeeling but it is after a week .”

“ What a coincidence, I would say. Mine ,too is after a week, but there is a lot of preparatory work left to be done “ , Vani continued her conversation.

With much trepidation,the gentleman continued,

“ Now, due to the delay, I’ll be heading straight for the seminar and then the wedding.  A lot of work, at this end ,too, I mean the arrangements .”

“ Oh yes, weddings are fun but a lot of hard work goes into the entire process ”, Vani replied coyly.

The gentleman’s intuitiveness  coaxed him further into the conversation, “I m sorry to be too personal.  Hope it’s not your own wedding”.

Any other woman would have resented such intrusion but Vani seemed quite poised.

“ You have guessed it right and if I m not too personal, may I put forth the same question to you?”

The gentleman replied after a hearty laugh,

“ You are on the right track. By next Monday, I would be a married man”.

Vani was flummoxed as her wedding too was on the same day. Her parents had  made the arrangements. The boy was her second cousin , her childhood friend whom she was very close to, and whom she had not met for almost fifteen years since she left Darjeeling for higher studies. Was this gentleman her Vicky ? How could she know ? Her brain was buzzing with questions. Her Vicky was also tall and as handsome as this gentleman was.

“Are you Vicky ? “ she managed to ask with a slight air of doubt.

The gentleman was bewildered.

Vani was quite dumbstruck. She kept looking at Vicky .Their conversations kept on reverberating in her mind over and over again. There was a long pause ,and an overpowering stillness set in.

She was a complete antithesis to what Vicky thought. The young Vanitha was shy and reticent but here was a beautiful young lady in front of him who could carry herself with much confidence. Before she could reply, he held her hand and continued,

“ Vanitha, I can’t believe it is you. You are incredibly beautiful. Do you ever think about the childhood days ?”

Vanitha had no answer. She was transported to another world, a dream world of her own.

The continuous announcement for the departure of the Kolkata flight shattered her dreams. She looked at Vicky endearingly.

“How did we get in such a pickle ?” Both chorused together.

“Vanitha, see how life unfolds itself in new wonderful ,amazing ways. Strangers just a while back, but now , a would be bride and groom.”

They had a mischievous, hearty laugh and started walking towards the boarding.