You are here: Home / Love and Romance / Real love 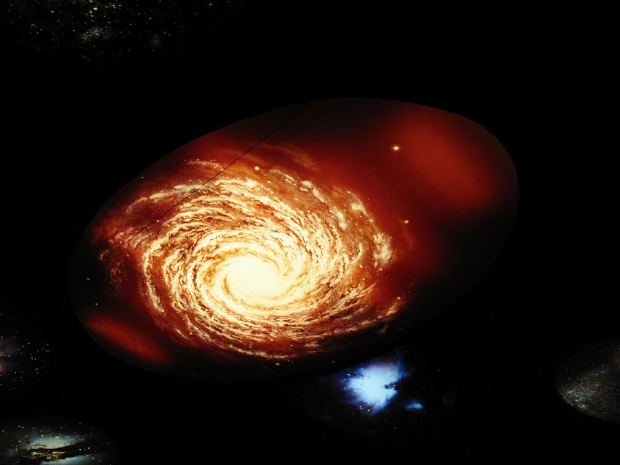 He was resting under a tree and enjoying beautiful breeze blowing, suddenly his eyes felt on a woman lying under a greenwood tree and weeping badly. The man was surprised when he came near that tree, that young lady was Nidhi his lover who left him 2 yrs. ago. She was crying bitterly, but when he came near and tried to console her, she stood up and ran away as fast as she could. He was shocked at this reaction of her. He decided to go back to his laboratory and complete his experiments.

He went back to his home but he found that the way to his home is being blocked by a series of animals and cars rushed together so he waited for a while, when the rush was over he made his way back to the home. He kept thinking about the incident happened today. He was experimenting on earthworms unusual growth under a certain unusual substance. He came to know that it is the chemical property of that substance that if earthworms would enter that substance, they would have unusual length.

This young man is Naveen, he is 39 yrs. old scientist who works in I.S.R.O he came Lucknow in holiday .He had his education in Europe and he stayed there for 10 yrs. He came back 2 yrs. ago to work in his home country India. He met Nidhi there only, but she left him because she wanted to become a news reporter.

At 9 pm the doorbell of his house rang, he opened the door and saw a man with heavy and stout body is standing in front of him. The man gave the message given by I.S.RO that he should finish his experiment soon and return back to his work. After giving the message the man went away.

Next morning when he went out to buy some eatables for breakfast, he again saw Nidhi strolling in a park and weeping. As soon as Nidhi saw Naveen she again walked away, but this time he followed her secretly .He found that she lives in some type of unusual cave with thousands of unusual creatures. He was astonished to see all this, and then also he decided to find more about this cave.

When Naveen was coming out he suddenly grabbed her on his arms and hurried to his home. He made her unconscious by a chemical and put her on his bed then he went away to find more about it.

After so many days research he got to know that is the cave of bad aliens who live in Andromeda galaxy and these aliens wanted to eat the intelligent brain of Nidhi.

Naveen decided to discuss the matter with I.S.RO and they agreed on his point. He went to their galaxy and destroyed their origin of power that was merliya a precious metal found there which gives power to these aliens .After all this task was over he hurried home to see that if Nidhi is fine. But to his surprise she was not found in his home. He was very worried about her; he searched everywhere but could not find a trace of her. He decided to go Europe and stay there forever.

He left India and settled in Rome the capital of Italy .he worked as a scientist.

One day he was coming back from educational fleet, he saw an old lady crying that Nidhi would be dead in two months. He consoled the lady and asked her the whole story; she told him that one     American scientist had trapped her to use her brain as the C.P.U of his new super computer. The old lady also told him that the only way to save her is to kill that evil scientist, that scientist can only be killed by gun powder made of merliya.

Next day he brought some merliya from his space collection and he sat on the flight of Mexico where scientist’s laboratory was there .After landing there he found his laboratory and destroyed him. He rescued Nidhi from Mexico and brought her Italy

She thanked him very much and expressed that she love someone else .When she said this his heart was hurt very badly, But then he remembered the lines his mother used to say that “Love is not always gain, but sometimes love is a sacrifice”. He consoled himself and helped her to get her love.

After 5 yrs. of this incident while he was travelling by ship on river Volga, He saw a beautiful lady with exceptional beauty, this lady was no other but Nidhi but he could not recognize her in her disguise. He was so much attracted by her charming beauty that he fell in love with her. He and that lady become friends. He left his job and whole day he strolled around with that lady. Within a month they became very close

One day they went on a long drive .Both became so close to each other that they even forgot their limitations and even did that shameful deed in the car. When they did that at least thousand times then also they loved each other whole day. Finally in night they got in their senses and realized what they actually did. When he realized that what deed he did with that lady he was ashamed of himself. He apologized to that lady but the lady told him that there is no need to apologize it’s a natural phenomenon, and then she opened   her disguise. He was astonished when he discovered that it was Nidhi .She told him that she is an alien princess and she is dead in this world, she was killed by his lover in lure of her money. Naveen decided to die he to gain Nidhi.