You are here: Home / Love and Romance / SHAPELY DELIGHTS 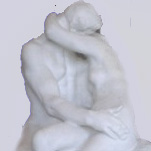 Harish was a happy-go-lucky person who ran a small grocery store in a busy area in South Delhi. Though his shop paled into insignificance in front of the many glitzy malls and food-bazaar type outlets that had come up in his neighbourhood yet the people of his locality procured their daily necessities from Harish because of his friendly nature. Harish was happily married and lived with his parents, his wife and elder brother. In other words, he had everything going for him in life. He had a lovely wife, doting parents and a caring brother. He used to earn a decent amount of money from his grocery store every month to take care of his earthly needs. Harish’s brother Girish was a manager in a leading construction company and his parents owned a tailoring shop which did brisk business. So Harish was not burdened with the task of looking after the needs of the other members of his family other than his wife.

With so much going for him everybody expected Harish to settle down into a life of domestic bliss. But that was not to be. Harish wanted to enjoy his life to the hilt before his hair turned grey. Although his wife was a caring woman who ensured that her hubby got more than his fair share of fun, yet Harish was fond of and always longed to explore ‘new territory’. It was because of this habit of his that his parents got him married at an early age hoping that their younger son would mend his errant ways after tying the knot. But after a brief lull, Harish started getting restless again. Harish started feeling suffocated. He felt as if he was missing out on something big in his life. Dipika, Harish’s wife, was a lovely woman, good-looking, fair and curvaceous. She was totally ignorant of her husband’s penchant of trying out new tricks every time they got into bed. Although she had not yet mastered the art of uninhibited, wild and lustful union, she was pleasantly surprised by her hubby’s prowess in bed.

Dipika was happy with the way everything had fallen into place for her at her in-laws place and was beginning to enjoy as well as eagerly await those immensely satisfying love-making sessions every night. Vijay, an electronics dealer who had his shop in Kotla Mubarakpur was Harish’s bosom friend. They had grown-up together sharing their dreams and fantasies as kids. Marriage and the responsibilities attached to it had forced Harish to turn his back on his friends for sometime and therefore he was overjoyed when he saw Vijay standing near the entrance of his shop one day. He took Vijay upstairs and introduced him to his wife. After exchanging pleasantries, Vijay informed Harish that he was getting married and extended an invitation to everyone. In between discussions Vijay disclosed that his would-be wife was a fashion designer by profession.

Vijay’s wedding reception was organised at a grand farmhouse on the outskirts of Delhi. Harish attended the reception along with his family and danced the night away with his group of friends. The trouble started when Vijay and his wife Ramona returned from Mauritius after their honeymoon. They were invited to a dinner party hosted by Harish. Now Ramona was an outrageously beautiful woman who could mesmerise any man just by looking at him. And Harish, our lecherous friend was immediately floored by her awesome looks. The restlessness which he had suppressed for sometime began to raise its head again and he felt as if he would grab her by arm, plant kisses by the dozen on her soft rosy cheeks and brutally ravish her. It took a superhuman effort from Harish to regain his composure. He mingled with his guests, shared jokes with them and dined together. But all the while a storm was brewing inside him. The party was over by midnight and Harish helped his wife with the usual chores and in cleaning up the place. Although he was dying to get into bed and unleash his thunder on Dipika, his unsuspecting wife had no inkling of what was in store for her. As soon as he got into bed after bolting the door he grabbed Dipika by her waist and started kneading her behind. Though taken by surprise by the sudden turn of events, she could not suppress a smile as by now she was well accustomed to her husband’s bedroom adventures. But there was something special in store for her that night.

Harish grabbed Dipika by her neck and started planting kiss after passionate kiss on her cheeks while at the same time he kept working on her dress. With his groping fingers he disrobed her in a jiffy and was all over her in an instant almost crushing her under his weight. Dipika was so stunned by the intensity of the assault that all she could do was shut her eyes and moan in both pleasure and pain. Harish was not done yet. He quickly got rid of his clothes and proceeded to complete his unfinished task shifting his attention now to her shapely thighs and curvaceous behind and fondled them to his heart’s content. By now Harish was more like a blazing inferno threatening to engulf everything in its vicinity. She made a feeble attempt to resist him but all it did was make him want her even more. Harish felt tired and totally drained by the time he was done and collapsed next to his wife and sank into a deep slumber……….

The storm clouds had retreated and the sun was out in full glory when he woke up with a start. It was already eight in the morning and Dipika badly battered the past night was still fast asleep. Harish wanted to wake her up and embrace her in his arms but something stopped him. He cast a long glance at his wife’s body and silently admired her beauty.

Harish took a deep breath and let his thoughts wander. He realised that he led a very sheltered life and earned his daily bread without slogging hard from morn to dusk. His parents were very caring and affectionate; his elder brother shouldered the responsibility of looking after their parents and upkeep of the house. What more could he ask for? He decided to mend his evil ways, and curb the restlessness within……..

Harishji, Harishji! Have you packed the items I told you to in the morning, someone uttered impatiently? Harish looked up and let out a sigh, standing before him was Devyani, his neighbour Mihir’s wife. Harish started packing the items she had asked for and handed it over to her. Devyani quickly checked the price of each item, and ran her red finger nails once over the loose change that Harish handed over to her to ensure that it was in order. A little later as she left the shop swinging her hips Harish could not help fantasising about Devyani. He liked the way she smiled, the way she bit her lips while counting the money, the way she moved and the size of her luscious……! Harish banged his fists on the table.

Harishji! Thank God you are still there. Harish looked up, and saw Devyani standing in front of him once again. There it is, she blurted out and grabbed it even before Harish could make out what was going on. I left my purse on the table; sorry for the trouble she smiled as she left the shop. Harish gazed at her face, at her derriere and then at her hips swinging from side to side as she walked back to her house.

Harish thought about all the mysteries he had set out to unravel. He thought about his numerous successes and conquests. How could he give up something which set his adrenaline surging?  Life is short and uncertain so why restrain oneself so much he thought. He heaved a sigh of relief. He sat down on his chair and started humming his favourite tune. He saw Devyani approaching his shop once again, and a wry smile escaped his lips.